How does the deduction for state and local taxes work?

How does the deduction for state and local taxes work?

Taxpayers who itemize deductions on their federal income tax returns can deduct state and local real estate and personal property taxes, as well as either income taxes or general sales taxes. The Tax Cuts and Jobs Act limits the total state and local tax deduction to $10,000.

The state and local tax (SALT) deduction previously was one of the largest federal tax expenditures, with an estimated revenue cost of $100.9 billion in fiscal year 2017. The estimated revenue cost for fiscal year 2019 dropped to $21.2 billion because the Tax Cuts and Jobs Act (TCJA) significantly increased standard deduction amounts (thereby reducing the number of taxpayers who will itemize deductions) and capped the total SALT deduction at $10,000.

Congress eliminated the deduction for taxes on motor fuels in 1978, and eliminated the deduction for general sales tax in 1986. It temporarily reinstated the sales tax deduction in 2004, allowing taxpayers to deduct either income taxes or sales taxes but not both. Subsequent legislation made that provision permanent starting in 2015. Starting in tax year 2018, taxpayers cannot deduct more than $10,000 of total state and local taxes. That provision of the law is scheduled to expire after 2025.

Who Claims the SALT Deduction? 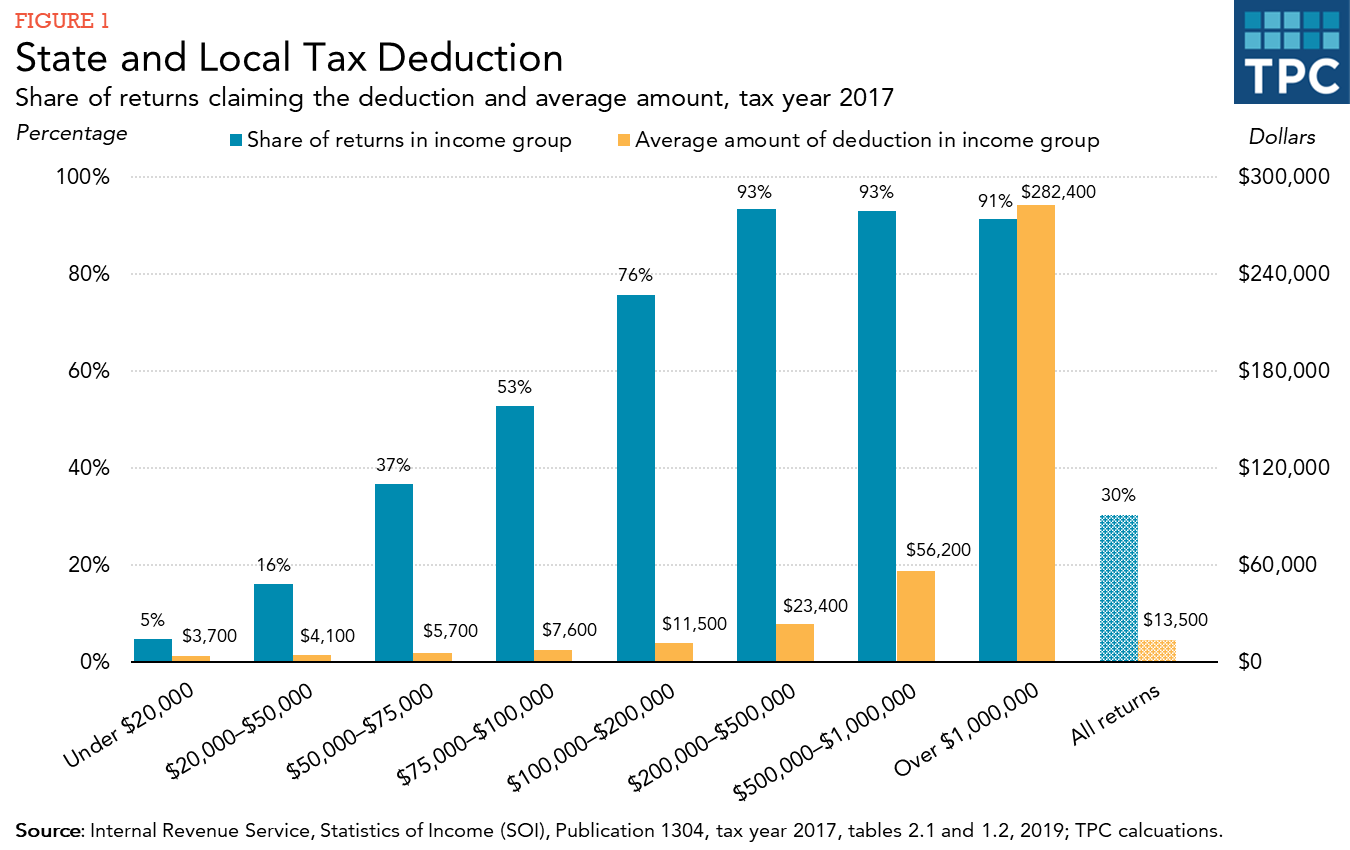 Although most high-income taxpayers claimed a SALT deduction, the federal individual alternative minimum tax (AMT) limited or eliminated the benefit for many of them. The AMT is a parallel income tax system with fewer exemptions and deductions than the regular income tax as well as a narrower set of tax rates. Taxpayers potentially subject to the AMT must calculate their taxes under both the regular income tax and the AMT and pay the higher amount. Taxpayers cannot claim the SALT deduction when calculating their AMT liability, and under tax law prior to 2018, the disallowance of the deduction was the major reason why taxpayers were required to pay the AMT. 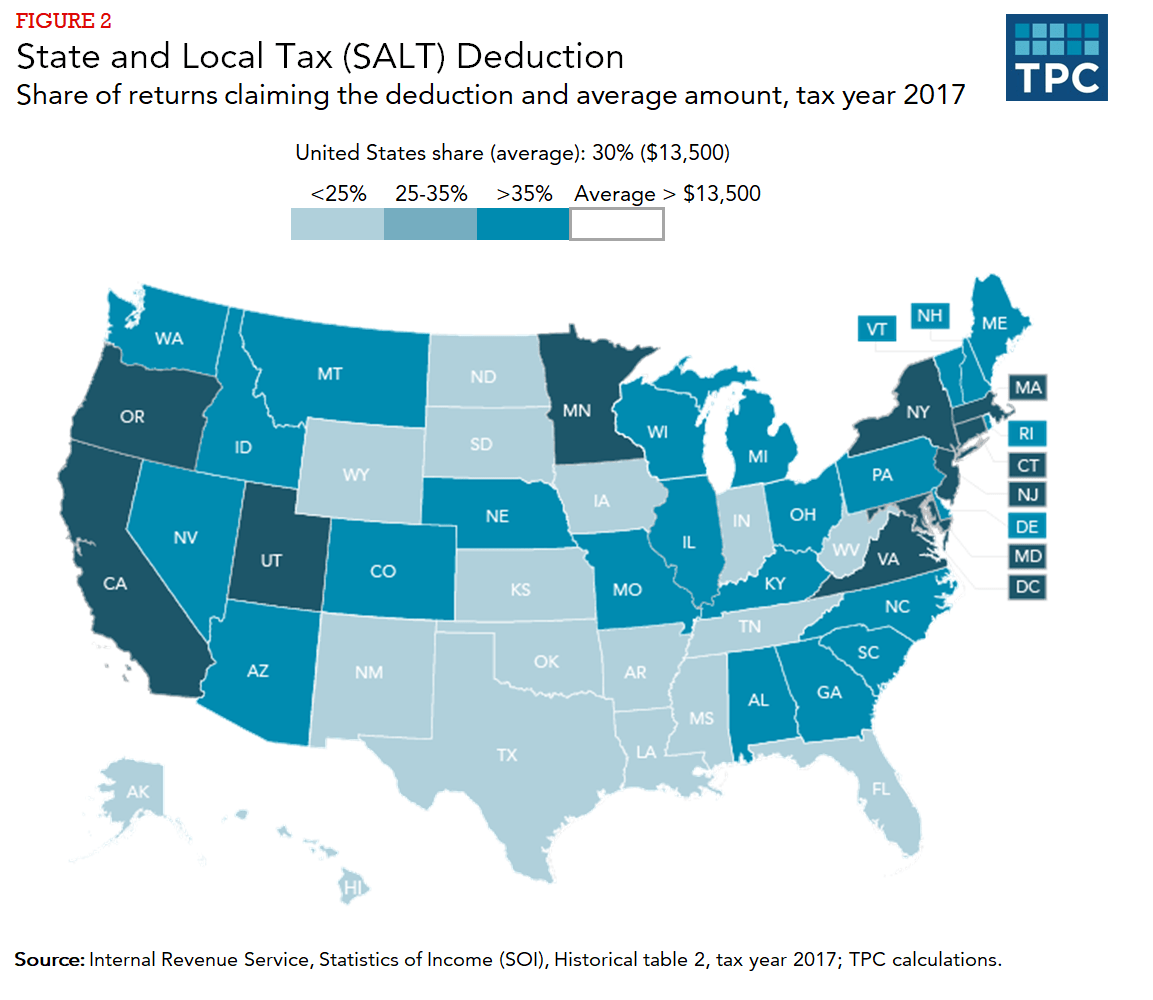 The Effect of TCJA on the salt Deduction

The TCJA has had a significant effect on the average tax saving from the SALT deduction. Both the percentage of taxpayers claiming the deduction and the average amount claimed fell dramatically in 2018 because of the changes enacted. Figure 3 compares the tax saving from claiming the deduction in 2017 and 2018, before and after the new tax law. The tax benefit is measured as the reduction in tax liability from the deduction, which considers the applicable tax rates in each year, the effects of the alternative minimum tax (which disallows the SALT deduction), and the limit on itemized deductions (the “Pease” limit) that was in place in 2017 but eliminated for 2018 by TCJA. 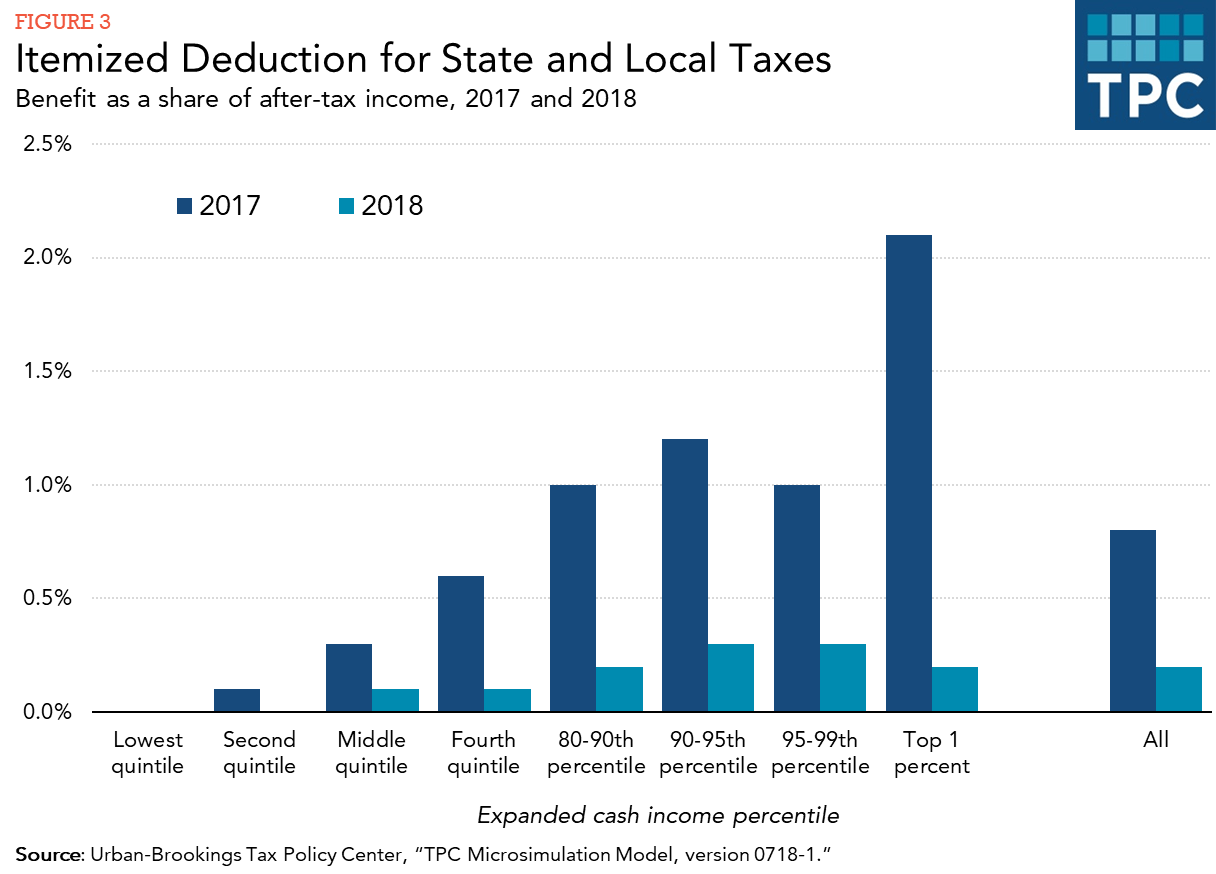 Effects of the Deduction

The SALT deduction provides state and local governments with an indirect federal subsidy by decreasing the net cost of nonfederal taxes for those who pay them. For example, if state income taxes increase by $100 for families in the 37 percent federal income tax bracket claiming the SALT deduction, the net cost to them is $63; that is, state taxes go up by $100, but federal taxes go down by $37. This federal tax expenditure encourages state and local governments to levy higher taxes (and, presumably, provide more services) than they otherwise would. It also encourages those entities to use deductible taxes in place of nondeductible taxes (such as selective sales taxes on alcohol, tobacco, and gasoline), fees, and other charges.

Critics of the deduction argue that state and local taxes simply reflect payments for the services those jurisdictions provide and, as such, should be treated no differently than other spending. They also point to the uneven distribution of benefits across income groups and states.

Proponents of the deduction counter that the portion of an individual’s income claimed by state and local taxes is not disposable income, and that taxing it at the federal level is double taxation. Moreover, they argue that federal subsidies are warranted because a significant portion of state and local government spending is for education, health, public welfare, and transportation, all of which benefit the population in other jurisdictions as well. A counterargument, however, is that while federal support may be warranted, the substantial revenues gained by eliminating or limiting the deduction could be used to provide direct support through federal grants and loans.

Dadayan, Lucy, and Noah Zwiefel. 2019. “We Don’t Know If The SALT Cap Is Driving Away Residents Of High-Tax States.” TaxVox (blog). October 8.