How did the TCJA change taxes of families with children?

How did the TCJA change taxes of families with children?

The 2017 Tax Cuts and Jobs Act increased the standard deduction, eliminated personal exemptions, doubled the maximum child tax credit (CTC) from $1,000 to $2,000 per child under age 17, and added a $500 nonrefundable credit for children ineligible for the $2,000 credit. The legislation also changed how the earned income tax credit (EITC) is indexed, causing the credit to grow more slowly over time. Despite these changes, overall tax benefits for families with children remained roughly the same as under prior law. The changes not related to the EITC expire after 2025.

purpose: they exempt a certain portion of income from taxation. As a result, very low-income tax filers pay little to no federal income tax, while others’ taxable income and taxes are reduced.

The TCJA approximately doubled the standard deduction from $9,350 for heads of household and $12,700 for married couples to $18,000 and $24,000, respectively, in 2018. As under prior law, the deduction amounts are indexed for inflation. At the same time, it eliminated personal exemptions—in 2017, prior to the TCJA, filers could claim an exemption of $4,050 for themselves and each of their dependents.

Thus, more income will be considered taxable under the TCJA than under prior law for almost all families with children. Doubling the standard deduction also decreased the benefit from claiming itemized deductions, which high-income families are more likely to do. Both provisions will revert to prior law in 2025.

If the credit exceeds taxes owed, taxpayers can receive up to $1,400 of the balance as a refund: this is known as the additional child tax credit (ACTC) or refundable CTC. The refundable CTC is limited to 15 percent of earnings above $2,500. Under prior law, filers could receive the full amount of the credit (then $1,000) in excess of taxes owed, but limited to 15 percent of earnings over $3,000.

The TCJA made no changes to the child and dependent care credit (CDCTC.) It changed how the earned income tax credit (EITC) was indexed so that it now increases more slowly over time. This change does not expire.

OVERALL EFFECTS OF TCJA FOR FAMILIES

Overall, most families’ tax benefits increased modestly as a result of the TCJA (figure 1.) Any decreases in benefits from the elimination of personal exemptions were roughly offset by the combination of increases in the standard deduction and child tax credit. 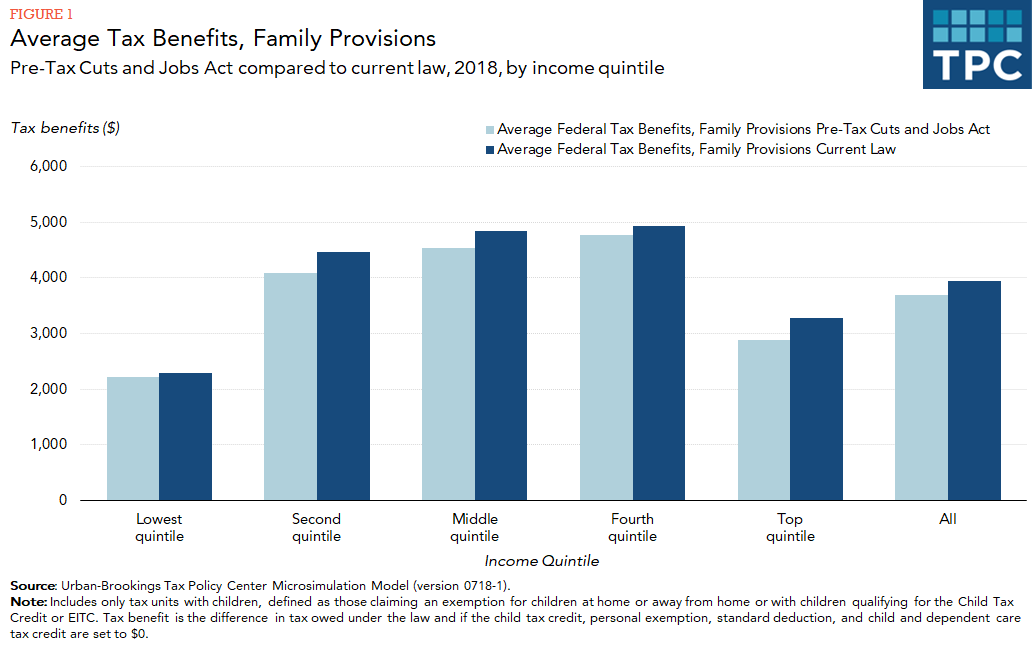 With most of these changes expiring in 2025, lawmakers have introduced various proposals to maintain benefits over the longer term, expand the reach of these tax provisions, or both. The federal income tax system already provides substantial benefits to low- and middle-income families with children, lifting more children out of poverty than any other program. However, the American Family Act and Working Families Tax Relief Act both propose lifting limitations on the refundable portion of the CTC.