Almost all taxpayers may establish IRAs, but high-income taxpayers are more likely to have an account. Taxpayers may either contribute to IRAs annually—or roll over larger balances from employer-sponsored plans.

Almost 60 million taxpayers own individual retirement accounts (IRAs), which include traditional IRAs, Roth IRAs, Simplified Employee Pensions (SEP IRAs), and Savings Incentive Match Plans for Employees (SIMPLE IRAs). The average IRA balance for taxpayers with IRAs is about $128,000. Ownership of IRAs increases with income and with age, as does the average IRA balance. Men and women are about as equally likely to own an IRA (table 1). 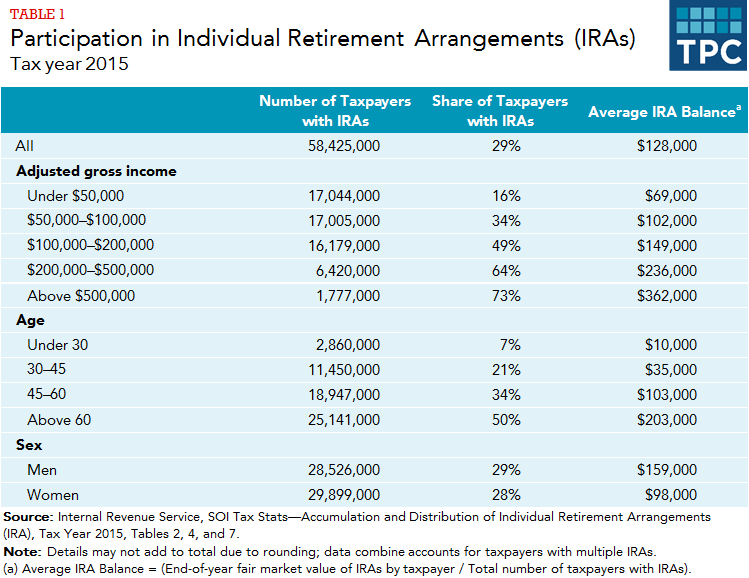 Taxpayers in 2018 may contribute in total the lesser of $5,500 per year ($6,500 for taxpayers age 50 or older) or the amount of their taxable compensation to traditional or Roth IRAs. They cannot make annual contributions to a traditional IRA starting once they reach 70 years and 6 months but they can still contribute to a Roth IRA.

Taxpayers also may roll over their balances from employer-sponsored contribution plans to an IRA, typically after changing jobs. Rollovers are usually much larger than regular contributions. The average rollover in 2015 was almost $95,000. Taxpayers can make rollover contributions to a Roth or traditional IRA regardless of age.

Holden, Sarah, and Daniel Schrass. 2017. “The Role of IRAs in US Households’ Saving for Retirement, 2017.” Washington, DC: Investment Company Institute.