How could we reform the estate tax?

How could we reform the estate tax?

Possible reforms run the gamut from repeal to modest fixes that would make the tax more difficult to avoid.

Proposals to reform the estate and gift tax range from comprehensive options, such as permanently repealing the estate tax or replacing the existing tax with a tax on inheritances, to more modest options, such as decreasing exemption amounts, increasing tax rates, and blocking avenues for avoidance.

The federal estate and gift taxes (including the generation-skipping tax, or GST) have changed more than a dozen times since 2001. The Economic Growth and Tax Relief Reconciliation Act of 2001 (EGTRRA) cut these taxes sharply but only through 2010. EGTRRA gradually phased out the estate tax and GST, eliminating them entirely for 2010 and leaving only the gift tax (at a reduced rate) in that year.

The Tax Relief, Unemployment Insurance Reauthorization, and Job Creation Act of 2010 reinstated the estate tax and GST for 2010 and extended them through 2012, with a $5 million estate tax exemption (indexed for inflation after 2011) and a top rate of 35 percent. But the law allowed executors to elect the EGTRRA rules for decedents who died in 2010. The American Taxpayer Relief Act of 2012 (ATRA) permanently extended the 2012 rules, though with a new top rate of 40 percent.

Many members of Congress have called for the repeal of the estate and gift taxes. That would be expensive, however. The Office of Management and Budget projects that these taxes will raise $205 billion in fiscal years 2019 through 2028.

Repeal would also be regressive—the benefits would go almost entirely to people at the top of the income distribution—and would invite significant sheltering of income. Further, gifts from an estate to charity currently qualify for full deduction from the estate’s taxable value, creating a substantial incentive to leave bequests to charities. Prior estimates indicate that repealing the estate tax would reduce charitable donations by 6 to 12 percent.

A more modest reform could repeal or modify the many estate tax preference items, such as special trust arrangements and valuation discounts, that allow savvy millionaires to drastically reduce or even eliminate estate tax liability. University of Southern California law professor Edward McCaffery said the tax was so easy to avoid that it was essentially a “voluntary tax” (albeit one that raised about $20 billion per year at the time of his writing). The plethora of loopholes complicates estate planning and results in comparable estates facing very different tax bills. Eliminating estate tax preferences could increase revenues, which could pay for extending the higher estate tax exemption scheduled to return to pre-TCJA levels after 2025 or for reducing the deficit.

Return to Prior law

Alternatively, policymakers might simply reverse some of the estate tax changes enacted since 2001 (figure 1). 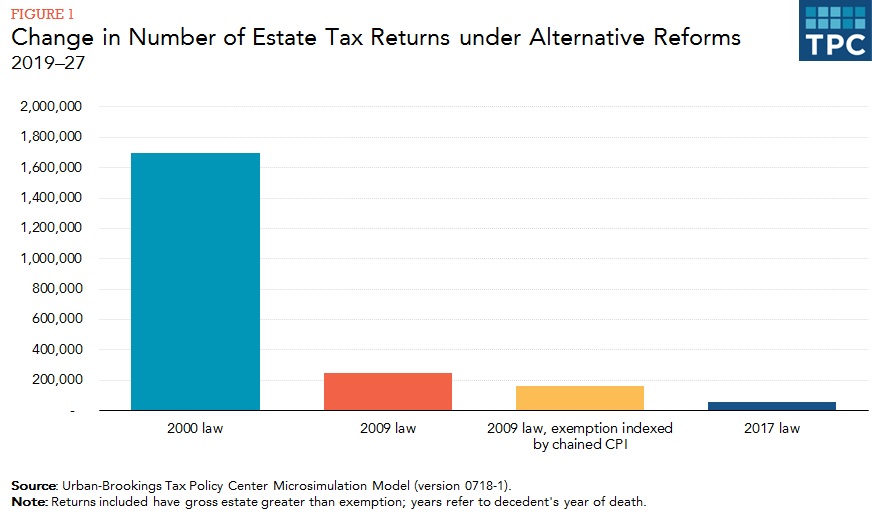 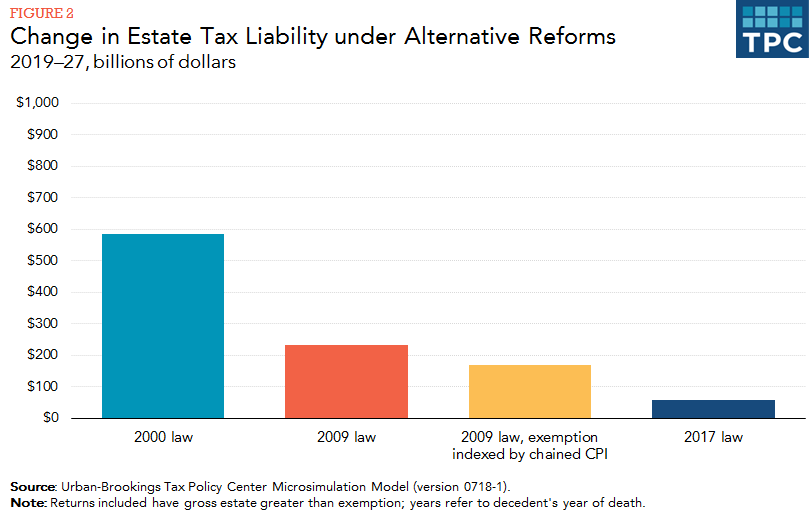