What are the major federal excise taxes, and how much money do they raise?

What are the major federal excise taxes, and how much money do they raise?

Excise taxes are narrowly based taxes on consumption, levied on specific goods, services, and activities. They can be either a per unit tax (such as the per gallon tax on gasoline) or a percentage of price (such as the airline ticket tax). Generally, excise taxes are collected from producers or wholesalers, and are embedded in the price paid by final consumers.

Federal excise tax revenue has declined over time relative to the size of the economy. As a percentage of gross domestic product (GDP), excise tax revenue fell from 2.7 percent in 1950 to 0.7 percent by 1979 (figure 1). Receipts temporarily increased because of the crude oil windfall profit tax imposed in 1980, but excluding that tax, (the dashed line in figure 1) revenue was about 0.7 percent of GDP through the 1980s and 1990s. Excise tax revenues as a percentage of GDP gradually declined again throughout the 2000s to roughly 0.4 percent in recent years. 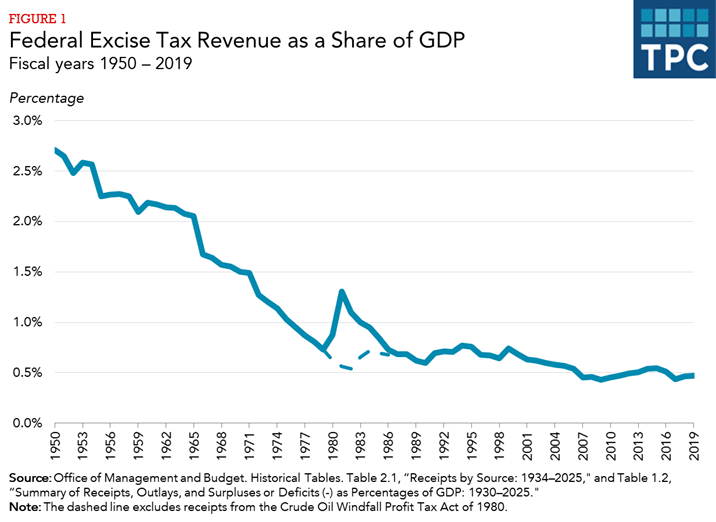 Excise tax revenue is either transferred to the general fund or allocated to trust funds dedicated to specified purposes. General fund excise taxes account for roughly 40 percent of total excise receipts, with the remaining 60 percent going to trust funds. 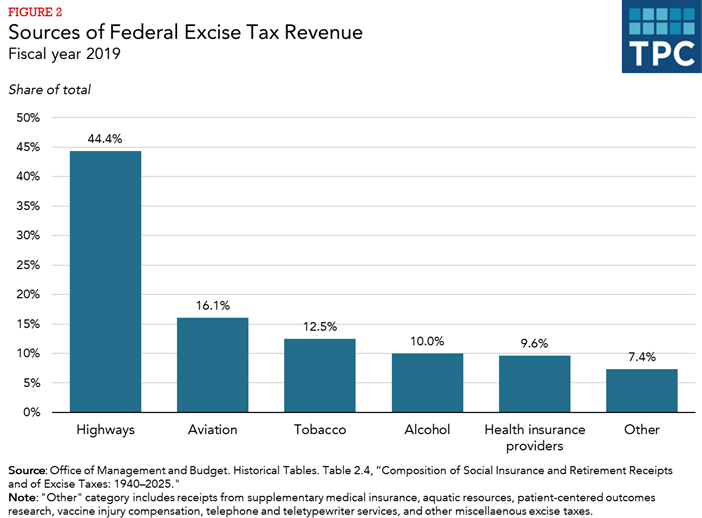 Highway-related excise tax revenue totaled $40.5 billion in 2019, 41 percent of all excise tax revenue. Gasoline and diesel taxes, which are 18.4 and 24.4 cents per gallon, respectively, make up over 90 percent of total highway tax revenue, with the remaining from taxes on other fuels, trucks, trailers, and tires. (The tax rates for gasoline and diesel include a 0.1 percent tax earmarked for the Leaking Underground Storage Tank Trust Fund.) Most other motor fuels are also subject to excise taxes, although “partially exempt” fuels produced from natural gas are taxed at much lower rates. Tax credits for producers of certain fuels deemed environmentally superior—including biodiesel, renewable diesel mixtures, alternative fuel, and alternative fuel mixtures—expired at the end of 2017 but were generally extended in December 2019 retroactively from 2018 through end of 2022, except for the alternatives fuels credit was extended only through 2020.

Excises Taxes Dedicated to the Airport and Airway Trust Fund

Revenue from excise taxes dedicated to the Airport and Airway Trust Fund totaled $16.0 billion in 2019, accounting for 16 percent of all excise tax receipts. According to Congressional Budget Office data, more than 90 percent of aviation excise taxes came from taxing passenger airfares, with the remaining coming from taxes on air cargo and aviation fuels.

Domestic air travel is subject to a 7.5 percent tax based on the ticket price plus $4.30 (in 2020) for each flight segment (one takeoff and one landing). A 6.25 percent tax is charged on domestic cargo transportation. International arrivals and departures are taxed at $18.90 per person (in 2020); there is no tax on international cargo. Both the domestic segment fee and the international arrivals and departures fee are indexed for inflation.

Revenue from tobacco taxes totaled $12.5 billion in 2019, accounting for 13 percent of all excise tax revenue. Federal excise taxes are imposed on tobacco products, which include cigarettes, cigars, snuff, chewing tobacco, pipe tobacco, and roll-your-own tobacco. The tax is calculated per thousand cigars or cigarettes or per pound of tobacco, depending on the product. The tax equals about $1.00 per pack of 20 cigarettes. Cigarette papers and tubes are also subject to tax. Tobacco taxes are collected when the products leave bonded premises for domestic distribution. Exported products are exempt. Unlike other excise taxes collected by the IRS, alcohol and tobacco taxes are collected by the Alcohol and Tobacco Tax and Trade Bureau of the US Treasury Department.

Excise tax revenue from alcoholic beverages amounted to $10.0 billion in 2019, 10 percent of total excise receipts. There are different tax rates for distilled spirits, wine, and beer. Distilled spirits generally are taxed at $13.50 per proof gallon (a proof gallon is one liquid gallon that is 50 percent alcohol), but a lower rate ($13.34) applies through end of 2020 to quantities of less than 22.23 million proof gallons removed from the distillery or imported. Tax rates on wines vary based on type and alcohol content, ranging from $1.07 per gallon for wines with 16 percent alcohol or less to $3.40 per gallon for sparkling wines, but lower rates also apply through end of 2020 to smaller quantities of wine removed or imported. Beer is typically taxed at $18.00 per barrel (31 gallons), although a reduced rate of $3.50 per barrel applied to the first 60,000 barrels for breweries that produce less than two million barrels. Lower rates apply in both cases through end of 2020. Note that the alcohol content of beer and wine is taxed at a much lower rate than the alcohol content of distilled spirits.

Office of Management and Budget. Budget of the United States Government, Fiscal Year 2021, Historical Tables. Table 2.3. “Receipts by Source as a Percentage of GDP: 1934–2025”; Table 2.4. “Composition of Social Insurance and Retirement Receipts and of Excise Taxes: 1940–2025.”