How do US corporate income tax rates and revenues compare with other countries’?

How do US corporate income tax rates and revenues compare with other countries’?

The US corporate income tax rate is now lower than the top rate in all other leading economies except for the United Kingdom. Corporate income tax revenues in the United States as a share of gross domestic product have been lower than the average in other leading economies, even before the 2017 reduction in the US corporate tax rate.

The 2017 Tax Cut and Jobs Act (TCJA) reduced the top US corporate tax rate from 35 percent to 21 percent and the average combined federal and state rate from 38.9 percent to 25.9 percent. As a result, the top US corporate tax rate, including the average state corporate rate, is now lower than that of all other leading economies in the G7 except the United Kingdom (with a 19 percent rate). Further, it is slightly below the average rate, weighted by gross domestic product (GDP), for the other Organisation for Economic Co-operation and Development (OECD) countries (figure 1). 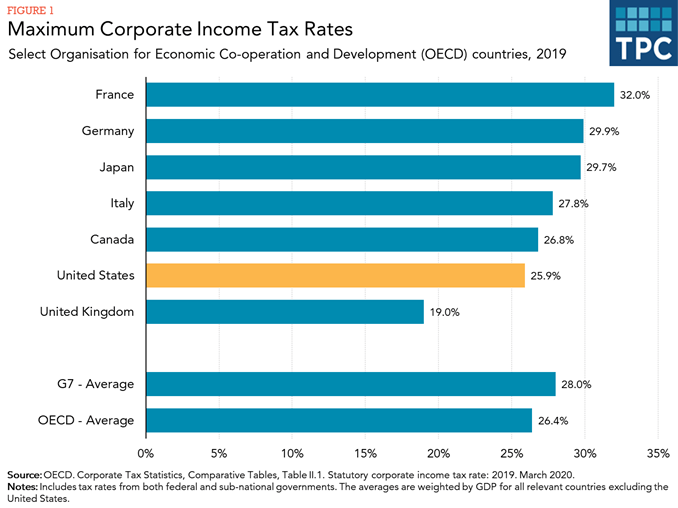 The Congressional Budget Office projects that federal corporate tax revenues will increase from 1.1 percent of GDP in fiscal year 2019 to about 1.4 percent of GDP in fiscal year 2024 as temporary investment incentives enacted in the TCJA phase out. Corporate tax revenues will then decline slightly to about 1.3 percent of GDP at the end of the 10-year budget period due to the expiration of temporary tax collections from a one-time transition tax on foreign profits accrued prior to enactment of the TCJA. These projections assume that bonus depreciation enacted in the TCJA will phase out beginning in 2023 as currently scheduled and that base-broadening measures and the 2026 increases in tax rates for global intangible low-taxed income and foreign-derived intangible income will also occur as scheduled.

US corporate tax revenues are a smaller share of GDP than in other leading economies because the US has a narrower tax base and an increasing share of business activity originating in businesses not subject to corporate tax (such as partnerships and subchapter S corporations). 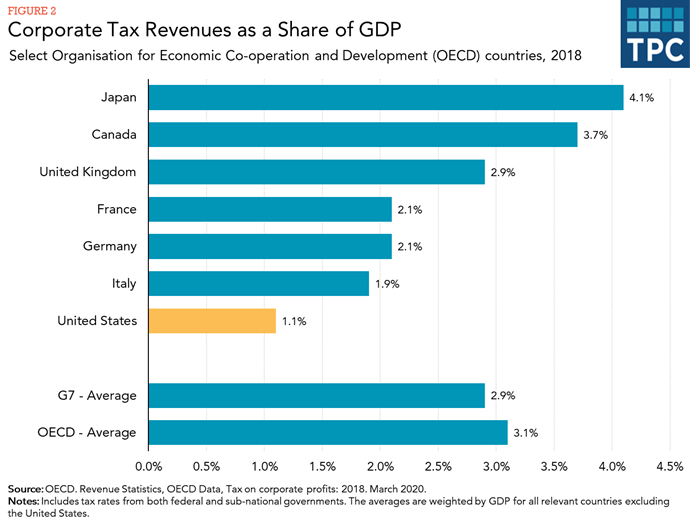