Who pays the AMT?

Who pays the AMT?

Before the 2017 Tax Cuts and Jobs Act (TCJA), the individual alternative minimum tax (AMT) primarily affected well-off households, but not those with the very highest incomes. It was also more likely to hit taxpayers with large families, those who were married, and those who lived in high-tax states. The TCJA shields almost all upper-middle and high-income taxpayers from the reach of the AMT. The AMT is now most likely to hit those at the top of the income scale who are engaged in certain tax sheltering activities.

the amt after the tcja

The TCJA enacted a higher AMT exemption and a large increase in the income at which the exemption begins to phase out. The act also repealed or scaled back some of the largest AMT “preference items”—items allowable under the regular tax but not the AMT—such as personal exemptions, job-related and other miscellaneous expenses, and the deduction for state and local taxes. As a result, the TCJA shielded almost all upper-middle and high-income taxpayers from the AMT. The tax is now most likely to affect those at the top of the income scale who take advantage of certain tax shelters allowed under the regular tax but not the AMT. 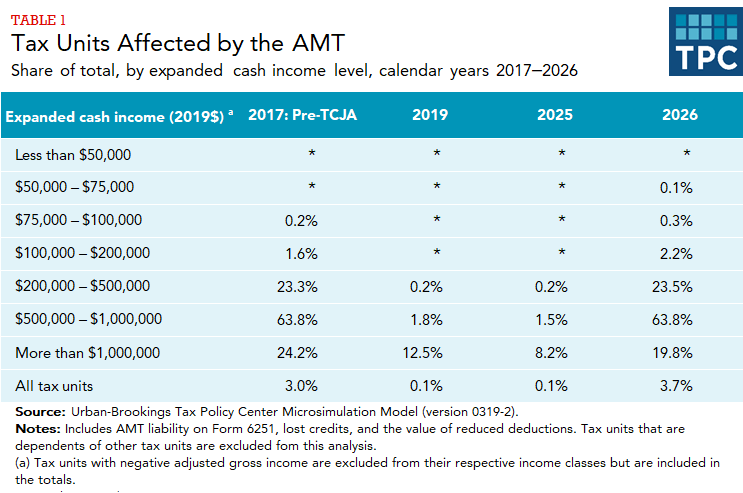 The AMT provisions in TCJA, along with almost all of its other individual income tax measures, are set to expire at the end of 2025. Thus, barring congressional legislation, the AMT will return in force in 2026. It will increase taxes for almost a quarter of taxpayers in the $200,000 to $500,000 income range and more than 60 percent of those with incomes between $500,000 and $1 million. It will again be less likely to affect those at the top of the income scale, hitting only about 20 percent of taxpayers with incomes greater than $1 million.

THE AMT AND MARRIAGE PENALTIES

Under the regular income tax, many married couples receive a “marriage bonus” because they pay less tax than they would if they were single. This is not true under the AMT, which imposes significant marriage penalties. AMT tax brackets are identical for married and single taxpayers, and the AMT exemption for married couples is only about one and a half times as large as the exemption for singles. 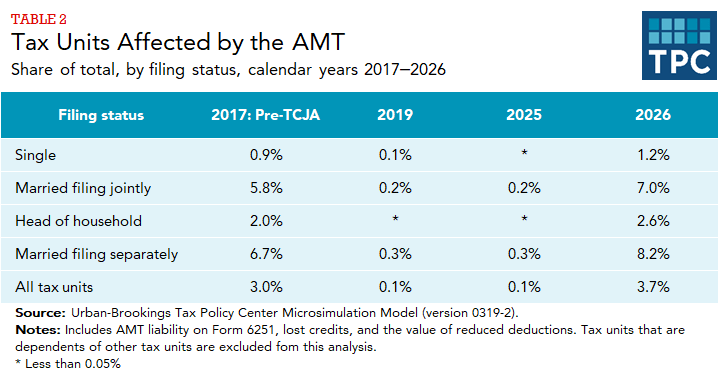