What are tax expenditures and how are they structured?

What are tax expenditures and how are they structured?

Tax expenditures are special provisions of the tax code such as exclusions, deductions, deferrals, credits, and tax rates that benefit specific activities or groups of taxpayers.

The Congressional Budget and Impoundment Control Act of 1974 defines tax expenditures as “revenue losses attributable to provisions of the Federal tax laws which allow a special exclusion, exemption, or deduction from gross income or which provide a special credit, a preferential rate of tax, or a deferral of tax liability.” These provisions are meant to support favored activities or assist favored groups of taxpayers. Thus, tax expenditures often are alternatives to direct spending programs or regulations to accomplish the same goals. The Office of Management and Budget (OMB) and the Congressional Joint Committee on Taxation (JCT) each year publish lists of tax expenditures and estimates of their associated revenue losses. The US Department of the Treasury prepares the estimates for OMB.

More generally, both the decision to count a provision as a tax expenditure and the measurement of its size require that OMB and JCT define a normative or baseline system against which some provisions are exceptions. Both agencies include in the baseline system provisions that allow tax rates to vary by income and that adjust for family size and composition in determining taxable income. OMB and JCT also allow for a separate tax on corporate income. The baselines of the two agencies do differ in some details, however, which contribute to modest differences in their lists of provisions and their estimates of revenue losses.

Credits reduce tax liability dollar for dollar by amount of credit. For example, the child tax credit reduces liability by $2,000 per child for taxpayers eligible to use it fully. A special category of credits, called refundable credits, allows taxpayers to claim credits that exceed their positive income tax liability, thereby receiving a net refund from the Internal Revenue Service. The major refundable credits are the earned income tax credit and the health insurance premium assistance tax credit, which are fully refundable, and the child credit, which is refundable for those with earnings above a threshold amount.

Some forms of income benefit from preferential rates. For example, long-term capital gains and qualified dividends face a schedule of rates ranging from 0 to 20 percent, compared with rates on ordinary income, which range from 10 to 37 percent.

Finally, some provisions allow taxpayers to defer tax liability, thereby reducing the present value of taxes they pay, either because the taxes are paid later with no interest charge or because they are paid when the taxpayer is in a lower rate bracket. These provisions allow taxpayers to claim deductions for costs of earning income before the costs are incurred or to defer recognition of current income until a future year. Examples include provisions that allow immediate expensing or accelerated depreciation of certain capital investments and others that allow taxpayers to defer recognition of income on contributions to and income accrued within qualified pensions and retirement plans. 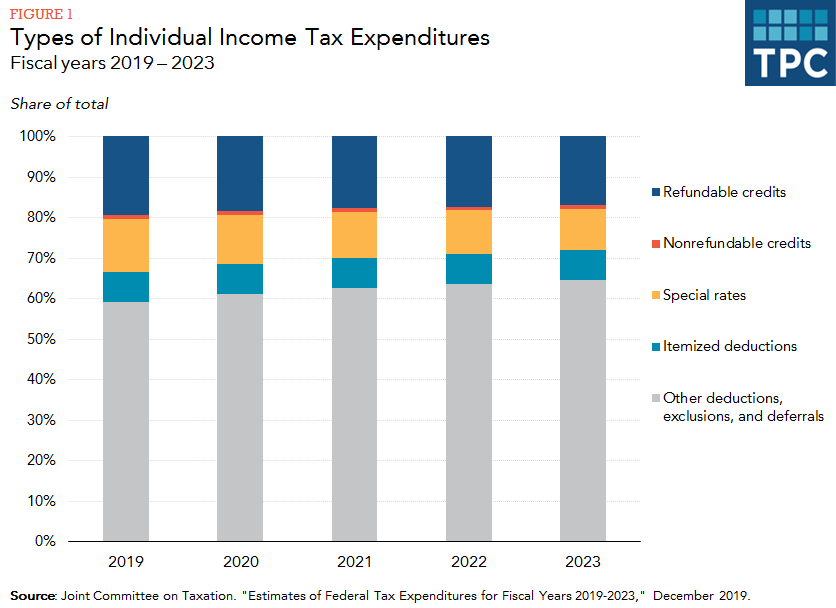