How do the estate, gift, and generation-skipping transfer taxes work?

How do the estate, gift, and generation-skipping transfer taxes work?

The United States has taxed the estates of decedents since 1916. Gifts have been taxed since 1924 and, in 1976, Congress enacted the generation-skipping transfer (GST) tax and linked all three taxes into a unified estate and gift tax.

The tax applies only to the portion of the estate’s value that exceeds an exemption level. The Tax Cuts and Jobs Act (TCJA) doubled the estate tax exemption to $11.18 million for singles and $22.36 million for married couples, but only for 2018 through 2025. The exemption level is indexed for inflation reaching $11.4 million in 2019 and $11.58 million in 2020 (and twice those amounts for married couples). The 40 percent top tax rate remains in place.

The tax rates and exemption levels have varied dramatically over the past two decades. Before the Economic Growth and Tax Relief Reconciliation Act of 2001 (EGTRRA), the estate tax exemption was set at $675,000 and scheduled to gradually increase to $1 million. EGTRRA cut all three taxes sharply, but only through 2010. The act gradually phased out the estate and GST taxes and repealed both entirely for 2010, leaving only the gift tax (at a reduced rate) in effect that year (table 1). 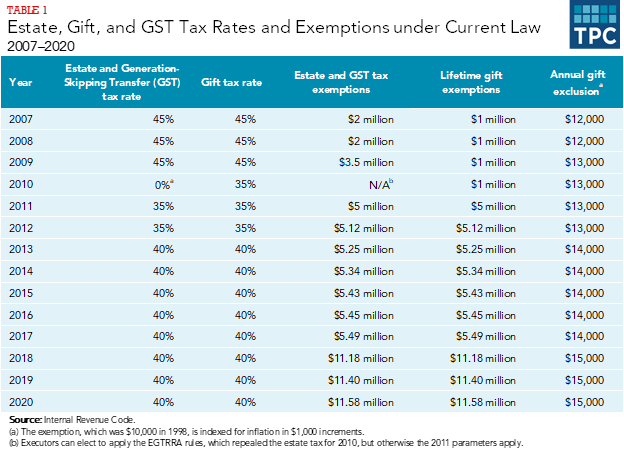 The Tax Relief, Unemployment Insurance Reauthorization, and Job Creation Act of 2010 reinstated the estate and GST taxes for 2010 and extended them through 2012, with a $5 million estate tax exemption (indexed for inflation after 2011) and a top rate of 35 percent, but allowed executors to elect the EGTRRA rules for decedents who died in 2010. The 2012 rules were permanently extended by the American Taxpayer Relief Act of 2012, but the top rate was increased to 40 percent (table 1).

Here’s how the estate tax works:

Here’s how the gift tax works:

And here’s how the generation-skipping trust tax works: