What is the new markets tax credit, and how does it work?

What is the New Markets Tax Credit and how does it work?

The credit provides an incentive for investment in low-income communities. The US Department of the Treasury competitively allocates tax credit authority to intermediaries that select investment projects. Investors receive a tax credit against their federal income tax.

The New Markets Tax Credit (NMTC) was established in 2000. Congress authorizes the amount of credit, which the Treasury then allocates to qualified applicants. From 2003 through 2020, the program has parceled out credits worth $26 billion (in 2020 dollars). The NMTC has supported more than 5,300 projects in all 50 states, the District of Columbia, and Puerto Rico through program year 2016. Some 43 percent of the US’s roughly 73,000 census tracts qualify for NMTC investments; by 2016, approximately 3,400 had received NMTC projects. In recent years, all applicants have pledged to place at least 75 percent of their NMTC projects in “severely distressed” census tracts. The credit is currently set to expire in 2021, though Congress has extended it several times over its lifetime.

HOW DOES THE CREDIT WORK?

NMTC investors provide capital to community development entities (CDEs), and in exchange are awarded credits against their federal tax obligations. Investors can claim their allotted tax credits in as little as seven years—5 percent of the investment for each of the first three years and 6 percent of the project for the remaining four years—for a total of 39 percent of the NMTC project. A CDE can be its own investor or find an outside investor. Investors are primarily corporate entities—often large international banks or other regulated financial institutions—but any entity or person is eligible to claim NMTCs.

HOW HAS NMTC SPENDING CHANGED OVER TIME?

The cost of the program has fluctuated over time, including bump-ups in response to Hurricane Katrina and again as a part of the American Recovery and Reinvestment Act (figure 1). The NMTC program held steady at around $1.4 billion per year, rising to $1.9 billion in 2020 as Congress expanded the credits available. 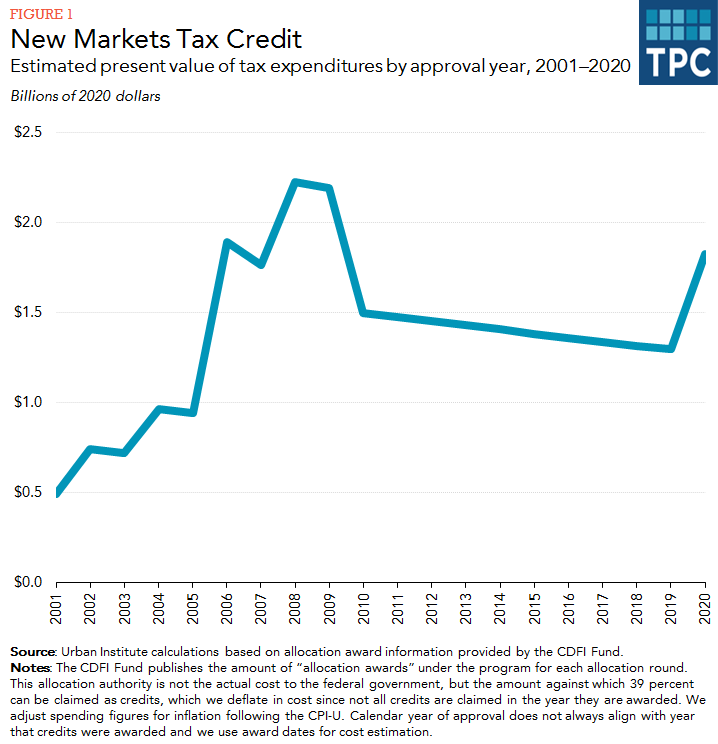 Community development entities are intermediaries that make loans or investments. They apply to the Treasury Department’s Community Development Financial Institutions (CDFI) Fund to receive tax credit authority. CDEs sell these tax credits to investors and use the funds to make debt or equity investments in entities located in qualified low-income communities. CDEs are encouraged to make deals and offer preferential rates and terms. CDEs frequently leverage the NMTC by using other public subsidies and private-sector funds to invest in projects.

Many enterprises, including banks, developers, and local governments, can qualify to become CDEs. Our analysis of the most recent three rounds of NMTC allocations shows that CDFIs and other mission lenders were awarded the highest share of NMTCs, followed by mainstream financial institutions. The third-highest share went to government and quasi-government CDEs, followed by operating nonprofits and for-profits (table 1).

“Qualified active low-income community businesses” (QALICBs) receive NMTC investments. While called “businesses,” QALICBs can be for-profit or nonprofit enterprises. Urban Institute calculations based on data from the CDFI Fund found that for NMTC projects reporting an entity structure from 2003 to 2016, 69 percent went to for-profit QALICBs, 30 percent to nonprofits, and Tribal entities received 0.4 percent of investments.

The Urban Institute found in its evaluation of the 2002–07 New Markets rounds that QALICBs ranged in size—as measured by annual gross revenues or operating budgets at the start of their NMTC projects—from $0 for start-ups to $7 billion for a large for-profit parent entity in the natural resources business, with a median of $740,000.

WHAT PROJECTS DOES THE PROGRAM FUND?

The NMTC program is flexible regarding project type and purpose. QALICBs can be used to finance equipment, operations, or real estate. Real estate financing can purchase or rehabilitate retail, manufacturing, agriculture, community facilities (e.g., health services, museums, or charter schools), rental or for-sale housing, or combinations of these.

The Urban Institute categorized NMTC project types (figure 2). Although no type dominated, the most prevalent were retail, manufacturing/industrial, mixed use, health care, office buildings, and schools. 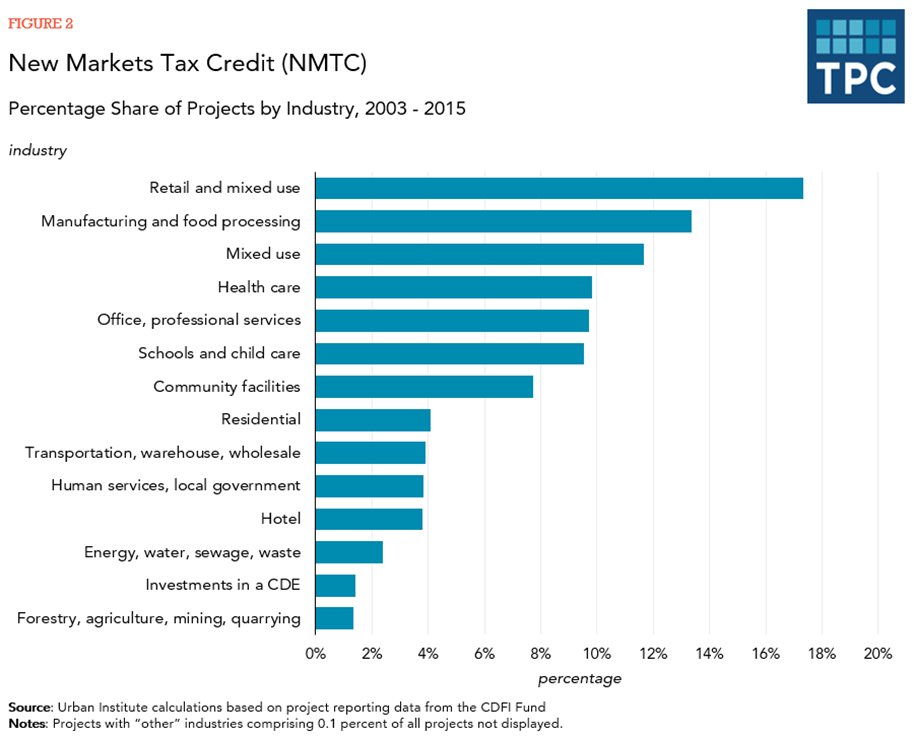