How might the taxation of capital gains be improved?

How might the taxation of capital gains be improved?

Taxing capital gains at the same rates as ordinary income would simplify the tax system by removing major incentives for tax sheltering and other attempts to manipulate the system. This could be accomplished by taxing accrued capital gains on an annual basis.

In the 1980s, taxpayers exploited the ordinary income/capital gain gap by making investments that generated ordinary deductions—such as interest, lease payments, and depreciation—to reduce their current income tax liability. These taxpayers got their money back (and presumably more) in the form of long-term capital gains. The Tax Reform Act targeted these arrangements by limiting passive loss, interest, and accelerated depreciation deductions. Most importantly, it also eliminated the ordinary income/capital gain gap, thus making many tax shelter schemes unprofitable.

With the return of the ordinary/capital income tax differential, schemes to convert ordinary income into capital gains have followed. The Senate investigated one such scheme, basket options, which used the tax alchemy of derivatives to convert short-term into long-term capital gains. Private equity and other investment managers are often compensated with “carried interest,” which allows them to claim long-term gains rather than salaries.

These planning opportunities are available only to the well-off, who hold the vast majority of capital assets and face the highest tax rates, thus deriving the most benefit from lower tax rates on capital gains (figure 1).

Annually taxing accrued capital gains, rather than realized gains, has been proposed as a method to equalize tax rates. This method, sometimes called “mark-to-market”, is currently used to tax financial institutions and some financial products.  By preventing “lock in”—holding property to defer tax liability (perhaps until death, when the heirs can completely avoid taxation of accrued gains on inherited assets) it could raise substantial revenue that would make it possible to reduce tax rates or the deficit. 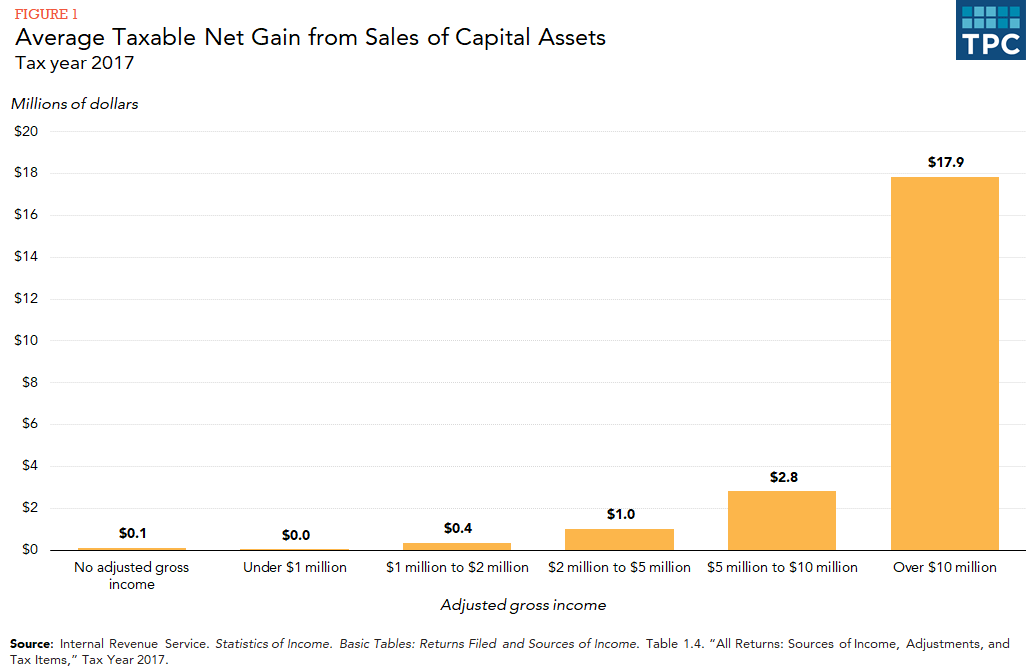 Alternatively, Congress could either tax capital gains at death or instate carryover basis so that heirs retain the lower basis of inherited assets. Either step would also reduce the tax incentive to keep assets until death, and could raise revenue.

Finally, if Congress is concerned about the potential double taxation of corporate earnings, it might integrate the two levels of taxes on corporate income. That is, Congress could tax corporate earnings only once, taxing the corporation or its shareholders but not both. The US Department of the Treasury (1992) has laid out several options for such integration.

———. 2012. “Tax Reform and the Tax Treatment of Capital Gains.” Testimony of Leonard E. Burman before the House Committee on Ways and Means and the Senate Committee on Finance, Washington, DC, September 20.