What kinds of tax-favored retirement arrangements are there?

What kinds of tax-favored retirement arrangements are there?

Tax-favored retirement arrangements can be sliced and diced in various ways. There are three big differences, though: who sponsors them, who bears the risk, and when Uncle Sam takes his cut.

There are two primary types of employer-sponsored plans. Defined-benefit plans generally distribute funds regularly to retired employees according to formulas that reflect employees’ years of work and earnings. In defined-contribution plans, of which the 401(k) plan is the most common, balances depend on past employee and employer contributions and on the investment returns accumulated on those contributions.

Individuals also may establish their own individual retirement accounts (IRAs), and either contribute or roll over balances from employer-sponsored plans. There are two main types: traditional IRAs and Roth IRAs. Like traditional 401(k)s, traditional IRAs allow taxpayers to deduct their contributions, up to a preset limit, from taxable income. Tax liability is only triggered when funds are distributed to the account owners. By contrast, contributions to Roth IRAs and Roth 401(k)s yield no tax breaks when they are made, but distributions to retirees, including accumulated investment income, are tax free.

Employers are not required to offer their employees retirement benefits, and only about half of all workers were covered by an employer-sponsored plan in tax year 2016. Coverage rates were highest for workers ages 45 to 65 and for those earning more than $100,000 (table 1). 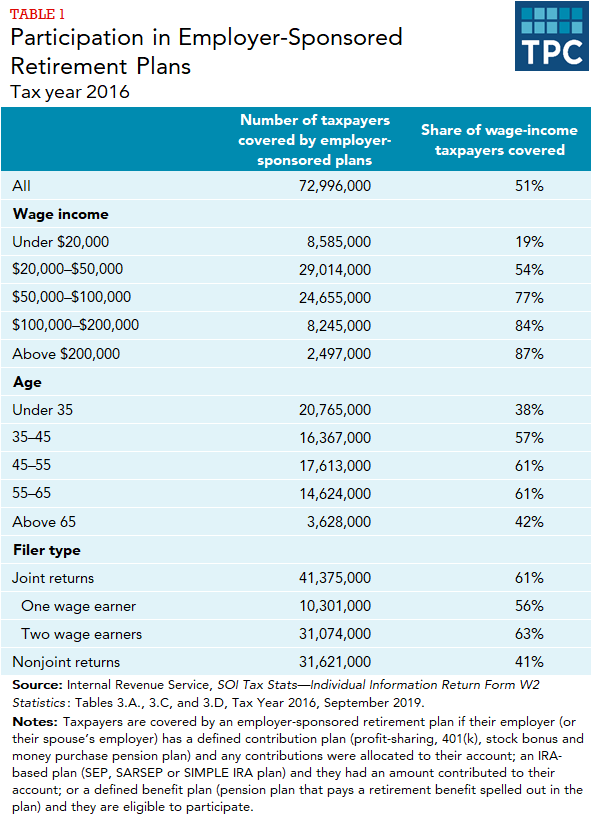 Large companies are more likely to sponsor retirement plans than small firms. In 2015, about two-thirds of full-time workers at medium and large firms participated in employer-sponsored plans, compared with about one-third of full-time workers at small firms (EBRI 2018). In 2015, almost all full-time state and local government employees (89 percent) participated in employer-sponsored plans of one sort or another. 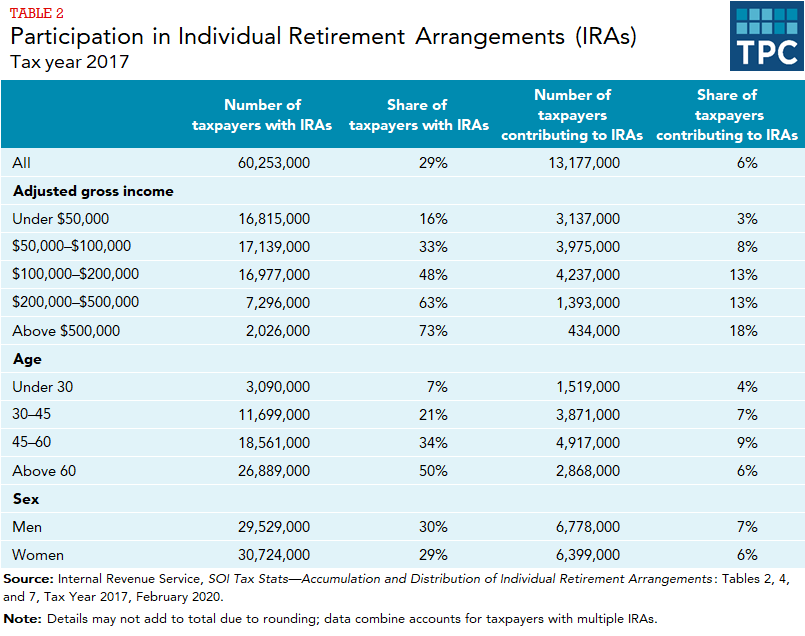 Employees of employer-sponsored plans, and owners of traditional IRAs, must take required minimum distributions, which generally begin after a participant reaches 72 (or retires, if later, in the case of an employer-sponsored plan).  Prior to 2020, the age was 70 ½.  Required minimum distributions apply also after a participant’s death.

Holden, Sarah, and Daniel Schrass. 2017. “The Role of IRAs in US Households’ Saving for Retirement, 2017.” Washington, DC: Investment Company Institute.