What is the difference between refundable and nonrefundable credits?

What is the difference between refundable and nonrefundable tax credits?

The federal budget distinguishes between the portion of a tax credit that offsets tax liability and the portion that is refundable, classifying the latter as an outlay. Most of the EITC—an estimated $65.6 billion of the 2019 total of $68.3 billion—was refunded. Much less of the child tax credit ($40.1 billion out of $115 billion) was refunded (figure 1). The 2017 Tax Cuts and Jobs Act substantially changed the child tax credit for 2018 through 2025, including doubling the maximum credit to $2,000 per child under age 17 while limiting the maximum refund to $1,400 (this amount will increase with inflation up to $2,000.) The TCJA also created a nonrefundable credit worth $500 per dependent not qualifying for the full $2,000 credit. Before this change, expenditures on the child tax credit totaled $54.3 billion, with just over half delivered as refunds. In FY2019, expenditures from the CTC totaled an estimated $115 billion; of which 35 percent was refundable. 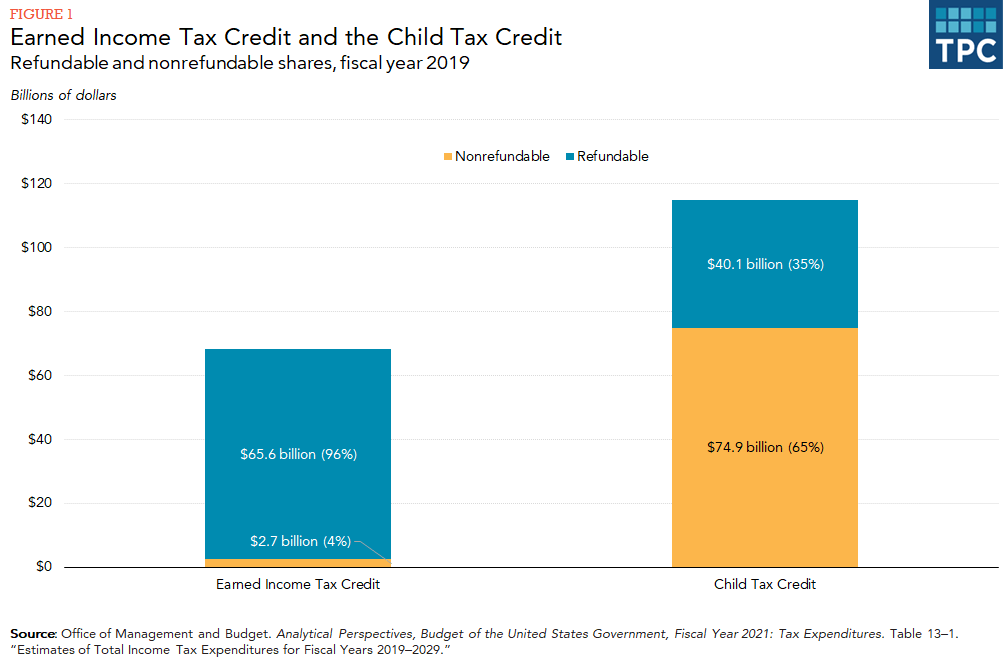 ADVANTAGES AND DISADVANTAGES OF REFUNDABLE CREDITS

Proponents of refundable credits argue that only by making credits refundable can the tax code effectively carry out desired social policy. This is especially true for the EITC and the CTC: if the credits were not refundable, low-income households most in need of assistance would not benefit from them. Furthermore, allowing credits only against income tax liability ignores the fact that most low-income families also incur payroll taxes.

Opponents of refundable credits, for their part, raise a host of objections: