What are pass-through businesses?

What are pass-through businesses?

Most US businesses are not subject to the corporate income tax; rather, their profits flow through to owners or members and are taxed under the individual income tax. Pass-through businesses include sole proprietorships, partnerships, limited liability companies, and S-corporations. The share of business activity represented by pass-through entities has been rising for several decades.

Most US businesses are taxed as pass-through (or flow-through) entities that, unlike C-corporations, are not subject to the corporate income tax or any other entity-level tax. Instead, their owners or members include their allocated shares of profits in taxable income under the individual income tax. Pass-through businesses include sole proprietorships, partnerships, limited liability companies and S-corporations.

Sole Proprietorships: A business with a single owner does not file a separate tax return, but rather reports its net income on Schedule C of the owner’s individual tax return (Form 1040). Generally, all net income from sole proprietorships is also subject to payroll taxes under the Self-Employed Contributions Act (SECA).

Limited Liability Companies (LLCs): LLCs are companies authorized under state laws. LLC owners, who are called members, may include individuals, corporations, other LLCs and foreign entities; there is no maximum number of members and most states also allow single ownership.  Certain activities, such as banking and insurance, are usually disallowed.  LLCs may elect to be taxed as a corporation, partnership, or as part of their members’ tax return (a “disregarded entity”). Members of disregarded entities are subject to SECA tax on their earnings.

S-Corporations: Eligible domestic corporations that elect S-corporation status file a corporate tax return (Form 1120S), but profits flow through to shareholders and are reported on Schedule E of Form 1040. S-corporations can have only one class of stock and cannot have more than 100 shareholders, who must be US citizens or resident individuals. (However, certain estates, trusts, and tax-exempt organizations are also allowed.) S-corporation owners do not pay SECA tax on their profits but are required to pay themselves “reasonable compensation,” which is subject to the regular Social Security or “FICA” (Federal Insurance Contributions Act) tax.

The share of business activity represented by pass-through entities has been rising, particularly since passage of the Tax Reform Act of 1986 (Plesko and Toder, 2013). Excluding sole proprietorships (which comprise a majority of business tax returns), more than 80 percent of businesses were organized as flow-through entities in 2015—up from 47 percent in 1980 (figure 1). Including sole proprietorships, pass-throughs account for more than 50 percent of total business net income, up from about 22 percent in 1980 (figure 2). 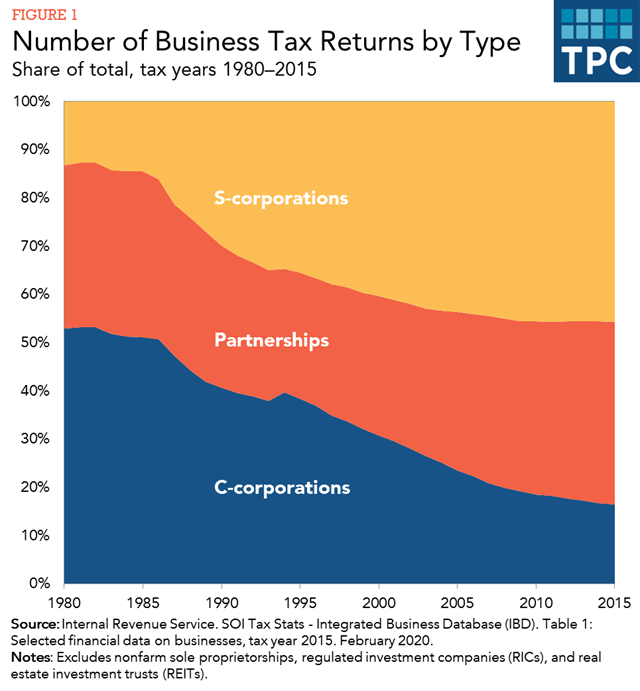 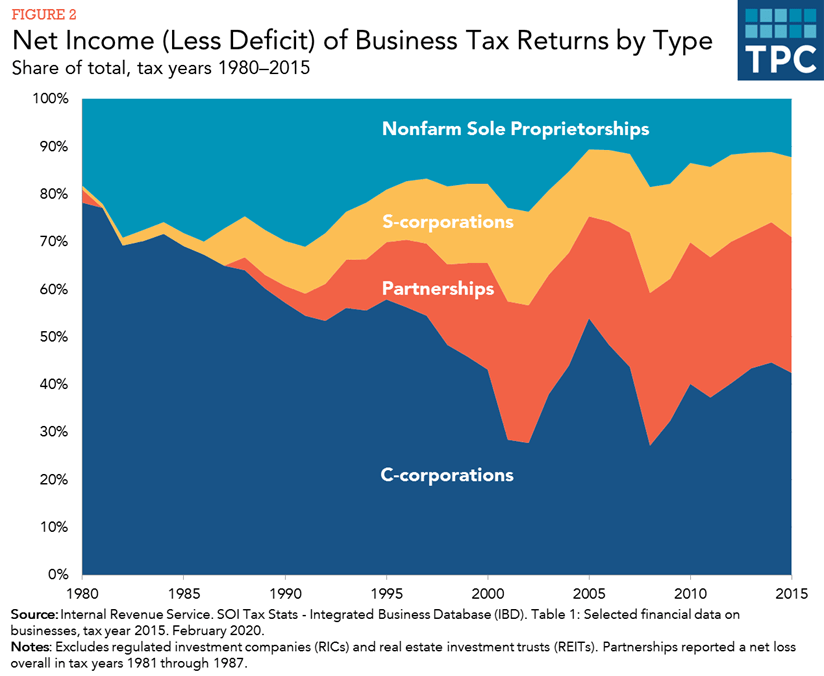 Pass-throughs AND the individual income tax

Income from partnerships and S-corporations has been rising as a share of adjusted gross income (AGI), while sole proprietorship income has been declining.  In 2017, individuals reported about $1.03 trillion in net income from all types of pass-throughs accounting for 9.3 percent of total AGI reported on individual income tax returns (figure 3). Nonfarm sole proprietor income has declined modestly as a percentage of total AGI beginning in the 1990s; in 2017, about 26 million returns reported net income of $346 billion, or 3.1 percent of AGI. In contrast, income from partnerships and S corporations has more than tripled as a share of AGI over the same period; in 2017, 9.1 million returns reported $680 billion in net income, or 6.2 percent of AGI. 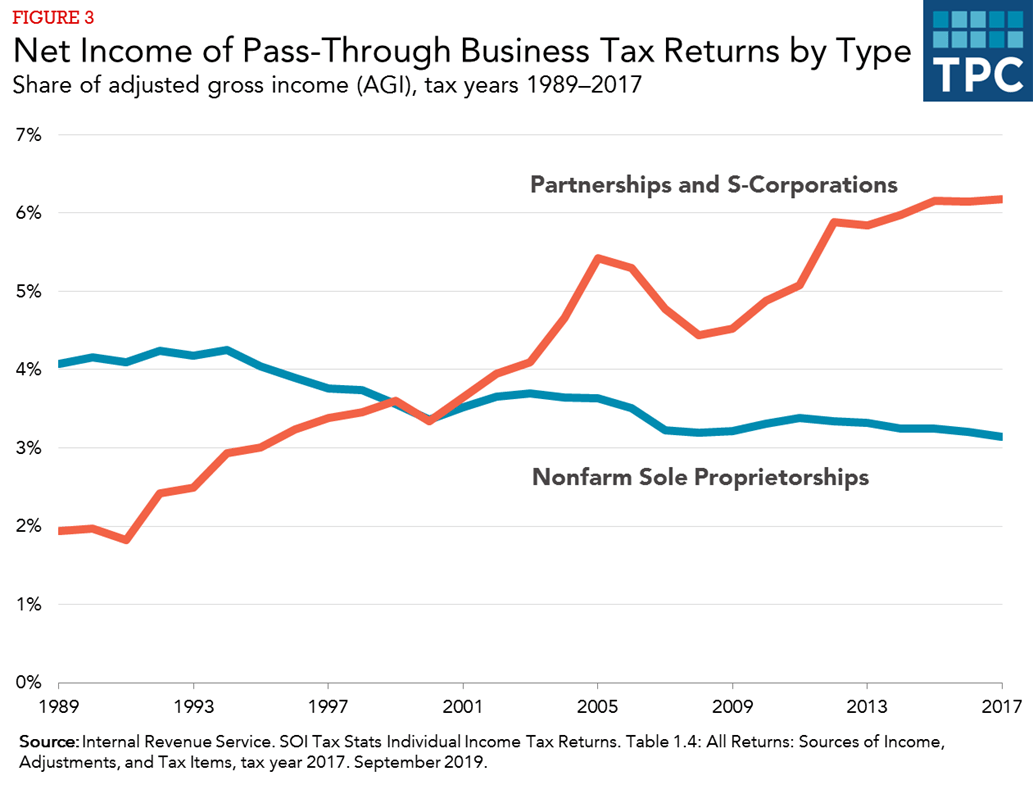 Cooper, Michael, John McClelland, James Pearce, Richard Prisinzano, Joseph Sullivan, Danny Yagan, Owen Zidar, and Eric Zwick. 2016. “Business in the United States: Who Owns It and How Much Tax They Pay.” Tax Policy and the Economy 30 (1): 91–128.