Who bears the burden of federal excise taxes?

Who bears the burden of federal excise taxes?

Workers, owners of capital, and households that consume a disproportionate amount of taxed items all bear the burden of federal excise taxes.

Excise taxes create a wedge between the price the final consumer pays and what the producer receives. An excise can either raise the total price (inclusive of the excise tax) consumers pay or reduce the business revenue available to compensate workers and investors.

The burden of an excise can be separated into two pieces: (1) the reduction in real household income, which equals the gross revenue generated by the excise tax and (2) the increase in the price of the taxed good or service relative to the prices of other goods and services, which depends on the mix of consumption by each household and equals zero across all households. Importantly, the decline in real income is the same regardless of whether nominal incomes fall (holding the price level constant) or whether the price level rises (holding nominal incomes constant).

TIMING OF THE TAX BURDEN

This still leaves open the timing of the tax burden—that is, whether the burden is assigned when income is earned or when it is consumed. Some distributional analyses follow the latter approach and distribute excise taxes in proportion to current levels of consumption. Alternative analyses assign the burden based on current income. Under the income-based approach, one can think of excise taxes as a reduction in purchasing power at the point income is earned. Of course, if all households fully consumed their income in each year, the two methods would yield identical results.

The Urban-Brookings Tax Policy Center distributes the burden of an excise tax when income is earned, taking into account the “offset” and the relative price effect. The US Department of the Treasury’s Office of Tax Analysis, as described in Cronin (1999), distributes excise taxes in the same manner. The Joint Committee on Taxation and the Congressional Budget Office, however, distribute the entire burden of excises in proportion to consumption of the taxed goods and services. 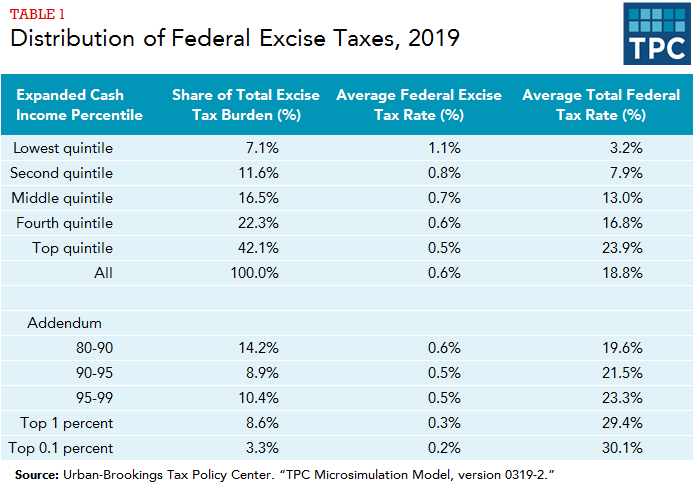 The distributional burden varies somewhat across the different categories of excise taxes (table 2). The most noticeable is the tobacco excise tax, for which the share of tax paid varies the least across income quintiles. The bottom quintile pays 16 percent of tobacco taxes and 18 percent of penalties under the Affordable Care Act (ACA) (compared to 4 to 5 percent of other excises), while the top quintile pays 27 percent of tobacco taxes and 25 percent of ACA penalties (compared to about 45 to 50 percent of other excises). Tobacco taxes and ACA penalties are the most regressive of the major federal excise taxes. The remaining categories vary only modestly from each other. Excise taxes on air travel are tilted the most toward higher-income households, with 52 percent paid by households in the top income quintile. 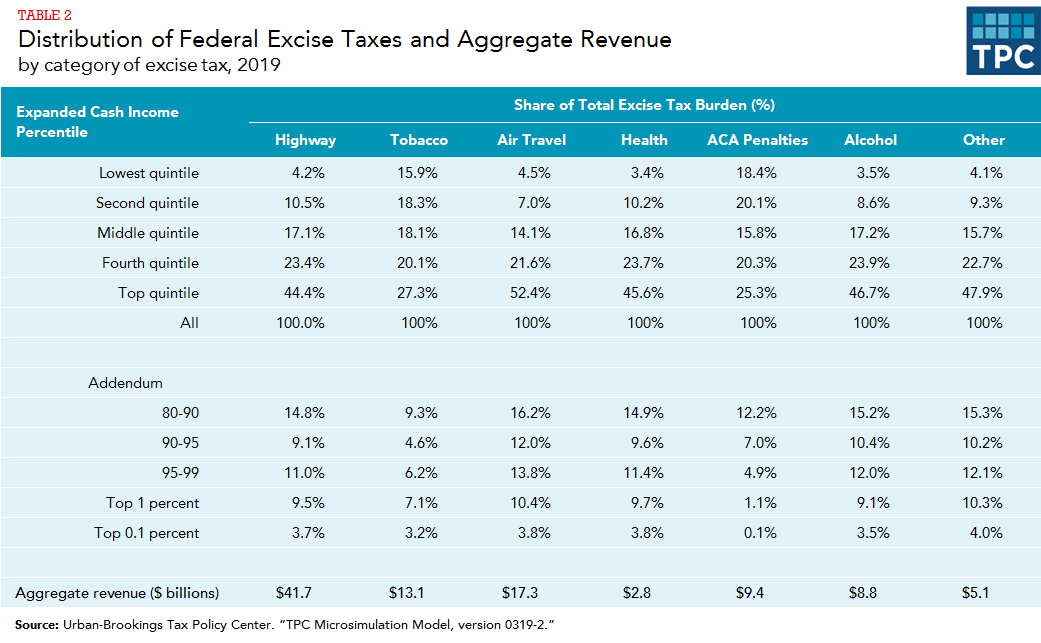 Office of Management and Budget. Budget of the United States Government, Fiscal Year 2019, Historical Tables. Table 2.3. “Receipts by Source as Percentages of GDP: 1934–2023”; and Table 2.4. “Composition of Social Insurance and Retirement Receipts and of Excise Taxes: 1940–2023.”