What types of federal grants are made to state and local governments and how do they work?

What types of federal grants are made to state and local governments and how do they work?

The federal government distributes grants to states and localities for many purposes, but the bulk are dedicated to health care. Some grants are restricted to a narrow purpose but block grants give recipients more latitude in meeting program objectives.

The federal government distributed about $721 billion (about 16 percent of its budget) to states and localities in fiscal year 2019, providing about one-quarter of these governments’ total revenues. About 61 percent of those funds were dedicated to health care, 16 percent to income security programs, and 9 percent each to transportation and education, training, employment, and social services (figure 1). 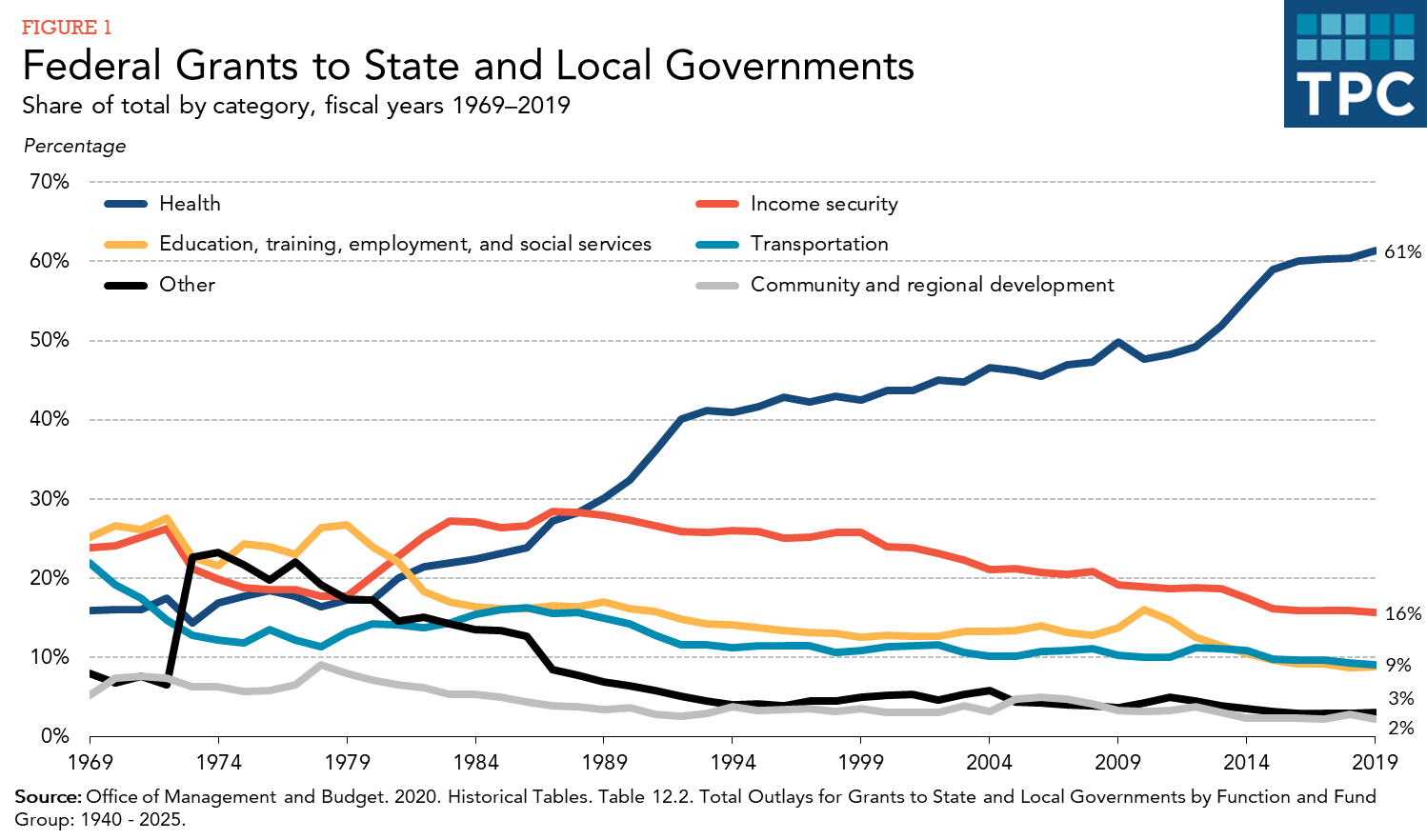 Over the past 50 years, the composition of federal grants has shifted dramatically. For example, federal grants for health care programs were less than 20 percent of the total until the 1980s.

There are two main types of federal grants. Categorical grants are restricted to a narrow purpose, such as providing nutrition under the Special Supplemental Nutrition Program for Women, Infants, and Children, also known as WIC. Even more restricted are grants limited to specific projects, such as building a highway. Block grants give recipients more latitude in meeting program objectives, such as assisting needy families and promoting work under the Temporary Assistance for Needy Families (TANF) program. States also set TANF eligibility requirements within federal parameters. Less common are grants targeted to redistributing resources across jurisdictions, such as the General Revenue Sharing program that ended in 1986.

Federal grants may also be classified according to how funds are awarded. Formula grants allocate federal dollars to states based on formulas set in law and linked to factors such as the number of highway lane miles, school-aged children, or low-income families. A prime example is the federal-state Medicaid program, which provides subsidized health insurance to low-income households.

Grants may also be awarded competitively according to specified criteria, as in the Race to the Top or Transportation Investment Generating Economic Recovery awards. In addition, grants may require states and localities to contribute their own funds (matching requirements) or maintain previous spending despite the infusion of federal cash (maintenance-of-effort requirements).

A recurring question with federal grants is how they influence state and local behavior. Research finds that states and localities substitute federal dollars for some of their own spending. However, magnitudes vary and in some cases federal grants may “crowd in” rather than crowd out state and local dollars. (See, for example, Gramlich and Galper (1973), who found that $1.00 of unrestricted federal aid stimulated $0.36 in state and local spending, $0.28 in lower state and local taxes, and $0.36 in higher fund balances or saving. However, other research has found evidence that federal dollars stimulate more than the expected state and local spending response. Some early “flypaper effect” research may have mistaken matching as lump-sum grants or overlooked maintenance-of-effort requirements. Other explanations include tacit understandings between federal appropriators and grant recipients about how recipients will respond to federal money (Chernick 1979; Knight 2002). See also Leduc and Wilson (2017).)

Beyond grants, the federal government also subsidizes state and local governments by allowing federal income taxpayers to deduct state and local taxes already paid (up to a $10,000 cap in 2018 through 2025 under current law) and by excluding bond interest from taxable income. The value of these subsidies was about $44 billion in forgone dollars to the US Treasury in FY 2019 (JCT 2019).

Chernick, Howard A. 1979. “An Economic Model of the Distribution of Project Grants.” In Fiscal Federalism and Grants-in-Aid, edited by Peter M. Mieszkowski and William H. Oakland, 81–103. Washington, DC: Urban Institute.

Gordon, Tracy. 2020. “Strengthening the Federal-State-Local Partnership in Recession and Recovery.” Testimony before the Committee on the Budget, US House of Representatives. Washington, DC: Urban-Brookings Tax Policy Center.