What are tax and expenditure limits?

What are tax and expenditure limits?

Tax and expenditure limits (TELs) restrict the growth of government revenues or spending by either capping them at fixed-dollar amounts or limiting their growth rate to match increases in population, inflation, personal income, or some combination of those factors. As of 2020, 33 states had at least one kind of TEL, including those states requiring a supermajority vote of the legislature to raise new taxes or revenues.

Spending versus revenue limits. States can limit their own revenues, appropriations, or both. Some states also limit the growth of local revenues, for example, restricting the growth of local property taxes. Appropriations and spending limits are more common than revenue limits. In 2020, 25 states imposed limits on their own government spending (figure 1). By contrast, 21 limited state revenue; 13 of these states capped both. Among states with revenue limits, 19 required a legislative supermajority (usually three-fifths or two-thirds of the legislature) to raise taxes or revenue, six limited revenue via other mechanisms, and four did both.

Stringency. In general, constitutional provisions are more difficult to change or override than statutory TELs. By the same token, TELs imposed directly by voters rather than by legislators are more restrictive (New 2010). The most stringent revenue limits require that surplus revenue go back to taxpayers as rebates or be sequestered in rainy day funds. Oregon’s “Kicker” rebate and Colorado’s Taxpayer Bill of Rights are examples.

In some states, lawmakers can evade their TELs by imposing unfunded mandates upon, or transferring program responsibility to, local governments. Several states prohibit such actions, however and, more often, the measure of a TEL’s stringency is whether the governor or legislature can override the cap with a simple majority. Several states have what, at first glance, appear to be restrictive TELs, but require only simple legislative majorities to override (i.e., the same threshold for approving a standard budget). Fifteen states require either a legislative supermajority or a popular vote to override their spending limits, and five impose this requirement on their revenue limits. Additionally, as mentioned, 19 states stringently bind revenues by requiring a legislative supermajority to raise new taxes or revenues. 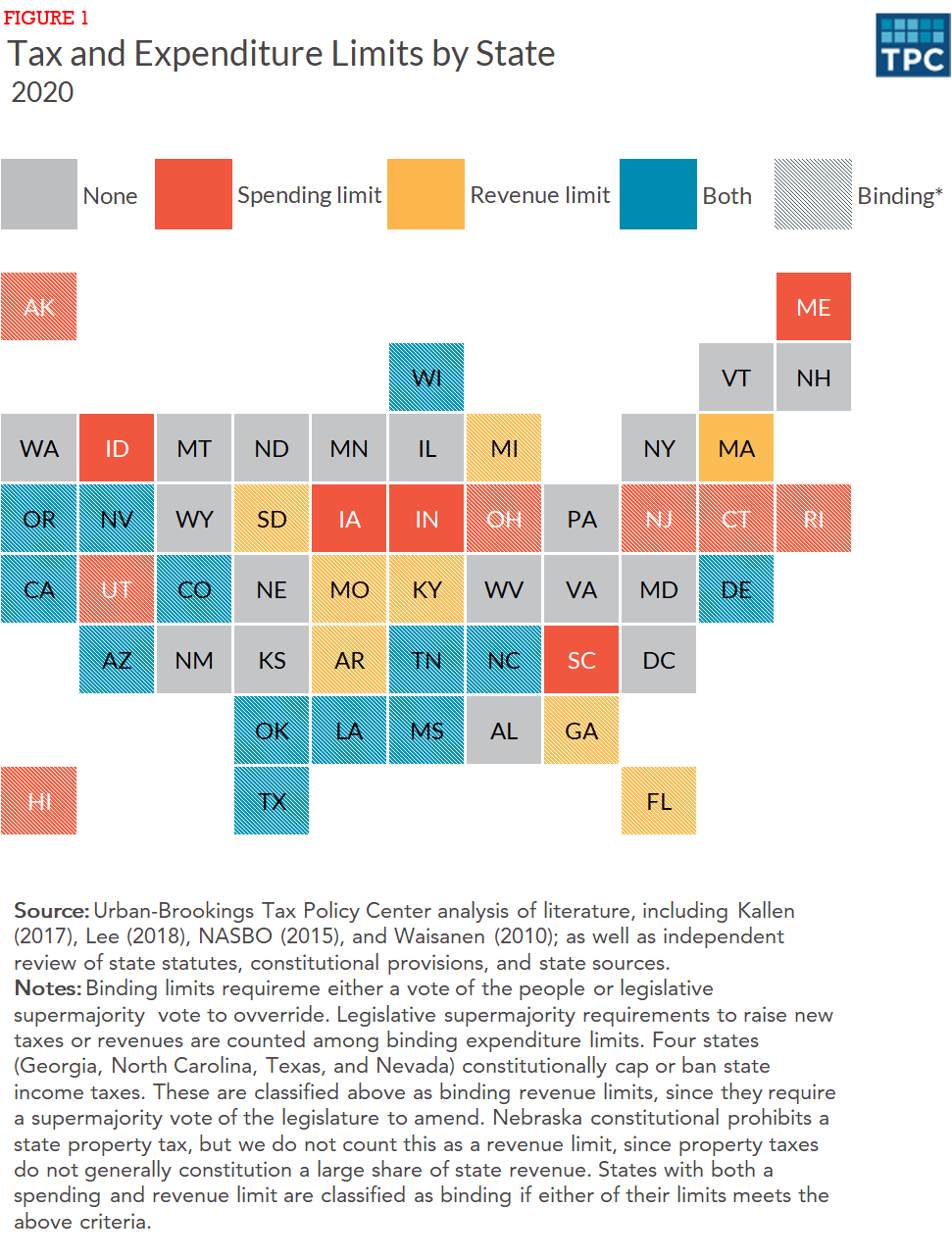 Most TELs emerged during the “tax revolt” of the late 1970s or the economic recession of the early 1990s. Although many of the best-known local property tax limits, such as California’s Proposition 13 and Massachusetts’s Proposition 2½, were adopted through citizen initiatives, most state TELs originated in their legislatures and limited expenditures, not revenue. As of 2015, only nine states had enacted TELs through voter initiative. New (2010) found that TELs adopted through citizen referendum were more effective than those adopted by legislatures.

Evidence on whether TELs limit state and local spending is mixed (Gordon 2008). Rueben (1996) found that laws’ details matter and that TELs requiring a legislative supermajority or popular vote to modify spending reduced state general fund expenditures by 2 percent. However, those savings were partly offset by higher local spending.

Knight (2000) found that states with both a supermajority requirement to raise taxes (a kind of revenue limit) and an additional tax or expenditure limit had lower expenditures than states with just one constraint. Poterba and Rueben (1999) found that TELs affect the costs of state borrowing in two ways: not surprisingly, spending limits lower the costs and revenue limits increase them.

The strictest tax limitations, like the original implementation of the TABOR rule in Colorado, can prevent states from saving revenues in rainy day funds to cushion against downturns. Randall and Rueben (2017) synthesized decades of research on TELs and other budgetary institutions, concluding that states should reform TELs that prevent them from saving during good times. Rueben, Randall and Boddupalli (2018) found that, during the Great Recession, states with binding revenue limits or a combination of binding revenue and expenditure limits were more responsive to deficit shocks than states with weaker rules.

Property tax limits constitute a special category of revenue limit because, in most cases, they are set by state governments but apply to local governments. Only two states—New Hampshire and Vermont—do not limit property taxes. State restrictions can apply to the property, to the jurisdiction, or both. Rate limits impose maximum rates on jurisdictions (e.g., counties, municipalities, and school districts). Limits on the growth of property tax assessments are typically applied to properties.

For example, Arizona limits residential property assessment to 10 percent of a home’s value, growth in its property tax base to 5 percent annually, combined state and local tax rates for owner-occupied residences to a maximum of 1 percent of the state’s limited property value, and growth in local property tax levies to 2 percent annually plus new construction. The state also caps expenditures for most local governments.