What is the earned income tax credit?

What is the earned income tax credit?

The earned income tax credit subsidizes low-income working families. The credit equals a fixed percentage of earnings from the first dollar of earnings until the credit reaches its maximum. The maximum credit is paid until earnings reach a specified level, after which it declines with each additional dollar of income until no credit is available.

After the credit reaches its maximum, it remains flat until earnings reach the phaseout point. Thereafter, it declines with each additional dollar of income until no credit is available (figure 1). 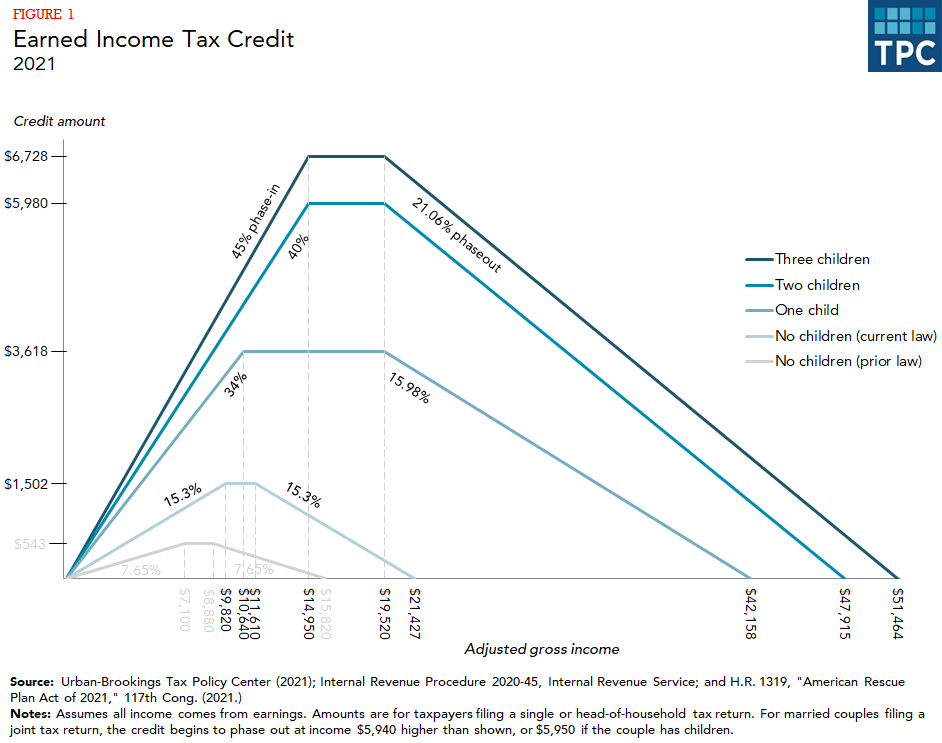 Prior to the ARP, childless workers could receive a maximum credit of only $543 in 2021 and the credit phased out at lower income levels. The credit was limited to workers between the ages of 25 and 64. The ARP’s expanded childless EITC is only in effect in 2021.

Despite expansions under the ARP, the EITC for childless workers remains limited compared to the credit for families with children. The credit phases out at lower incomes and age restrictions apply. Childless workers must be at least age 19 (18 if formerly a foster child or homeless) to qualify for the credit, or at least age 24 if the filer is a half-time or more student in at least five months of the year. As a result of these tighter eligibility rules and a smaller maximum benefit, 83 percent of benefits from the EITC go to families with children.

For all workers, regardless of family size, the tax filer’s investment income must be below $10,000 to be eligible for the EITC. The ARP increased that limit from $3,650 under prior law. That change does not expire after one year.

IMPACT OF THE EITC

In general, research shows that the EITC encourages single people and primary earners in married couples to work (Dickert, Houser, and Scholz 1995; Eissa and Liebman 1996; Meyer and Rosenbaum 2000, 2001). The credit, however, appears to have little effect on the number of hours worked once people are employed. Although the EITC phaseout could cause people to reduce their hours (because credits are lost for each additional dollar of earnings, which is effectively a surtax on earnings in the phaseout range), there is little empirical evidence of this happening (Meyer 2002).

The one group of people that may reduce hours worked in response to EITC incentives is lower-earning spouses in married couples (Eissa and Hoynes 2006). On balance, though, the increase in work resulting from the EITC far outweighs the decline in labor participation among secondary earners in married couples.

Some recent analysis sheds some doubt on the magnitude of EITC work incentives (Kleven 2020). Possibly, a strong economy and welfare reform played a larger role in increasing work for single mothers during the 1990s, when most EITC studies found the credit increased work. However, subsequent analysis found robust evidence that the EITC encouraged people to work (Schanzenbach and Strain 2020).

When calculating the official poverty measure, tax credits are typically not included. However, if the EITC were treated like earnings, it would have been the single most effective antipoverty program for working-age people, lifting about 5.6 million people out of poverty in 2018, including 3 million children (CBPP 2019).

The EITC is concentrated among the lowest earners, with almost all of the credit going to households in the bottom three quintiles of the income distribution (figure 2). (Each quintile contains 20 percent of the population, ranked by household income.) Very few households in the fourth quintile receive an EITC (fewer than 2 percent), and none in the top quintile. 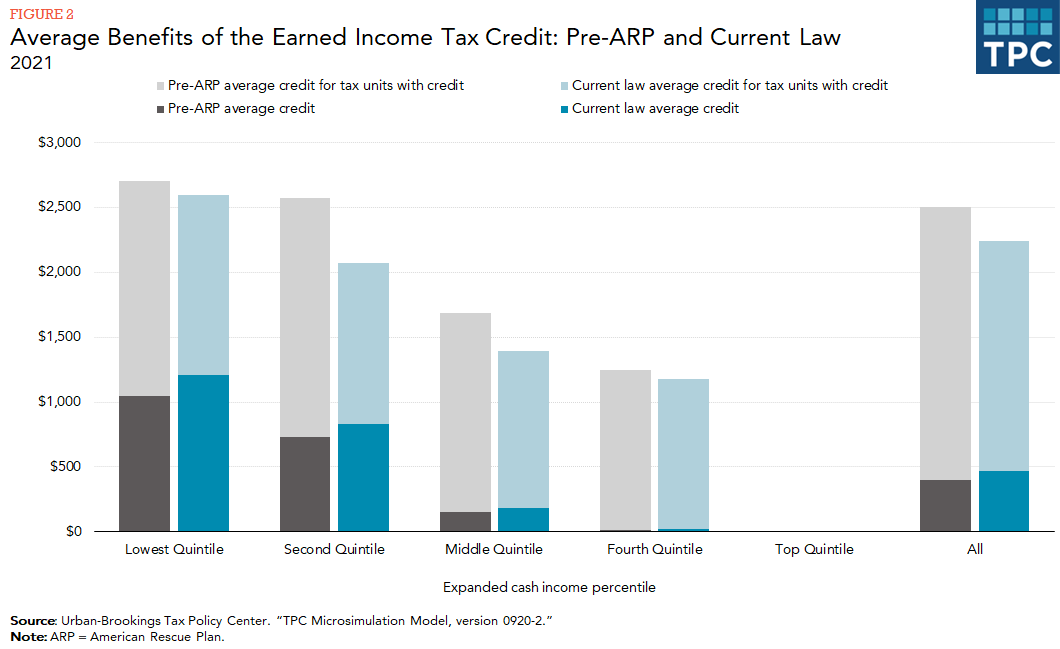 The American Rescue Plan, enacted in March 2021, expanded the childless EITC for 2021 in several ways. The maximum credit for childless workers increased from $543 to $1,502. Single filers with incomes up to about $21,000 and joint filers with income up to about $27,000 were made eligible for the EITC, up from $16,000 for single people and $22,000 for married couples under previous law. The minimum eligibility age for the credit was lowered from age 25 to 19 for most workers, to 24 for students attending school at least half-time, and to 18 for former foster children and homeless youth. The restriction on filers ages 65 and older claiming the credit was removed. All of these changes are set to expire at the end of the year.

The changes in the American Rescue Plan for childless workers are similar to reforms previously proposed by both congressional Democrats and Republicans (Marr 2015; Maag and Airi 2020). Democratic policy makers have already begun calling for making the expansions to the credit for childless workers permanent.

A more far-reaching approach to reform that would still expand benefits to childless workers would be to separate the credit into two pieces—one focused on work and one focused on children. There are many examples of this type of reform proposal, including the President’s Advisory Panel on Federal Tax Reform (2005), the Bipartisan Policy Center (2013), and Maag (2015b).

ERROR RATES AND THE EITC

The EITC likely delivers more than a quarter (28.5 percent) of all payments in error, according to a recent Internal Revenue Service (IRS) compliance study. The largest source of error was determining whether a child claimed for the EITC actually qualified (IRS 2014). The child must live with the parent (or other relative) claiming the EITC for more than half of the year to qualify. The IRS receives no administrative data that can verify where a child resided the majority of the year, making it difficult for the agency to monitor compliance. Attempts to use administrative data from other programs to verify child residence have not proven successful (Pergamit et al. 2014).

To reduce fraud, the Protecting Americans from Tax Hikes Act of 2015 requires the IRS to de-lay tax refunds for taxpayers who claim an EITC or additional child tax credit on their returns until at least February 15. Delaying refunds was paired with a requirement that third-party in-come documents related to wages and income be provided to the IRS by January 31 (in prior years, this information was due the last day of February for paper filing and March 31 for electronic filing, and employers were automatically granted a 30-day extension, if requested). As a result, information needed to verify wages often got to the IRS well after the first returns had been processed. Together, these measures allowed earlier systemic verification of EITC claims, which protected more revenue than in prior years (Treasury Inspector General for Tax Administration 2018).

Executive Office of the President and Department of the Treasury. 2014. “The President’s Proposal to Expand the Earned Income Tax Credit.” Washington, DC: The White House.

Marr, Chuck. 2015. “EITC Could be Important Win for Obama and Ryan.” Washington, DC: Center on Budget and Policy Priorities.