Who benefits from the deduction for charitable contributions?

Who benefits from the deduction for charitable contributions?

A charitable contribution is intended for the benefit of those supported by the charitable activity, whether through education, health care, or the like. Just under three-quarters of charitable giving comes directly from individuals, with the balance coming from foundations, estates, and corporations (figure 1). According to Giving USA, total contributions totaled $427.71 billion in 2018, though there is some double counting, in the sense that this year’s grants by foundations derive from past contributions by individuals, corporations, and bequests. 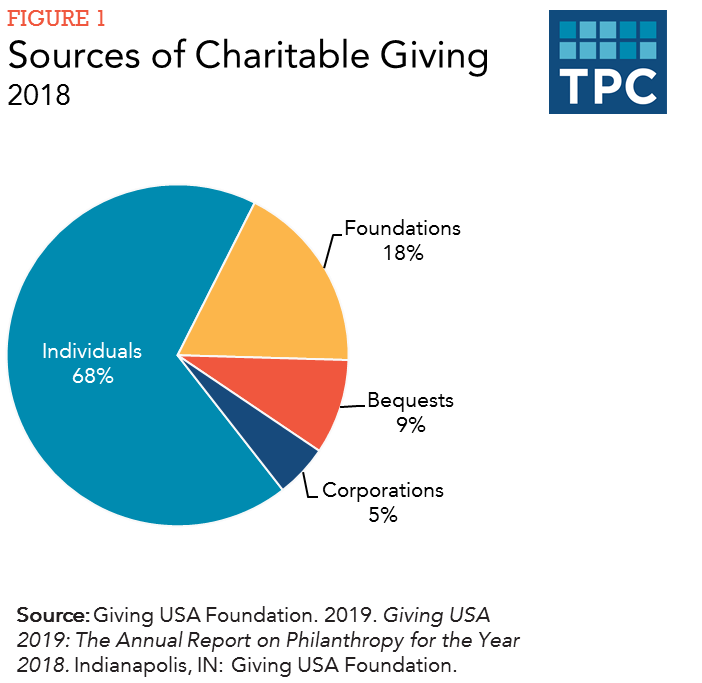 The charitable deduction subsidizes donors by lowering the net cost of the gift. Just how much the tax deductibility lowers the cost of giving depends on the donor’s marginal tax rate. For instance, a donor in the 30 percent tax bracket pays 30 cents less tax for every dollar donated. Higher-income individuals generally save more taxes by giving to charity than those with lower incomes for two reasons: they have higher marginal tax rates, and they are more likely to itemize deductions and take advantage of the tax savings.

The deductibility of contributions subsidizes charitable activity but is also sometimes independently justified as an appropriate adjustment to the tax base. Many economists and lawyers argue that a taxpayer’s taxable income should be determined by income net of contributions, because a taxpayer with, say, $50,000 of income and $10,000 of contributions has no more ability to consume than someone with $40,000 of income and no contributions. Others see the $10,000 as a consumption choice made by the donor that does not warrant special tax treatment. Either way, the amount of income subject to tax still decreases because the charitable gift is generally transferred tax free to beneficiaries.

Some donations fund activities that substitute for those the government might otherwise undertake. Other donations complement government activities, and still others support an adversarial relationship with government. Nonprofits, for instance, may seek government funding for an activity, or its members may engage in debates with government officials, though various rules limit outright lobbying. Many believe these types of charitable activity make democracies healthier, even when particular chartable efforts have little impact.

Although the tax deduction likely induces additional giving, estimates of the size of this effect vary. Indeed, there is considerable debate over whether the increase in giving exceeds the loss of government revenue, though valuing the deduction on that basis alone treats charitable contributions and government spending simply as substitutes.