What is the AMT?

What is the AMT?

The individual alternative minimum tax (AMT) operates alongside the regular income tax. It requires some taxpayers to calculate their liability twice—once under the rules for the regular income tax and once under the AMT rules—and then pay the higher amount. Originally intended to prevent perceived abuses by a handful of the very rich, the AMT affected roughly 5.1 million filers in 2017. The Tax Cuts and Jobs Act dramatically reduced the reach of the AMT, albeit temporarily, so that the tax will hit only 200,000 filers in 2019.

In January 1969, Treasury Secretary Joseph W. Barr informed Congress that 155 taxpayers with incomes exceeding $200,000 had paid no federal income tax in 1966. The news created outrage. That year, members of Congress received more constituent letters about the 155 taxpayers than about the Vietnam War. Congress subsequently enacted an “add-on” minimum tax that households paid in addition to regular income tax. It applied to certain income items (“preferences”) taxed lightly or not at all under the regular income tax. The largest preference item was the portion of capital gains excluded from the regular income tax.

Congress enacted the modern alternative minimum tax (AMT) in 1979 to operate in tandem with the add-on minimum tax. The main preference items, including capital gains, moved from the add-on tax to the AMT. Congress finally repealed the add-on tax, effective in 1983.

The original minimum tax and the AMT affected fewer than 1 million taxpayers annually through the late 1990s. In 2001, Congress passed the Economic Growth and Tax Relief Reconciliation Act, which substantially reduced regular income taxes but provided only temporary relief from the AMT. Over the following decade, Congress repeatedly passed legislation—often at the last possible moment—to temporarily “patch” the AMT by increasing the AMT exemption amount.

Although the patches prevented an AMT explosion, the number of taxpayers affected by the AMT continued to grow throughout the decade (figure 1) because (1) the regular income tax was indexed for inflation, but the AMT was not; and (2) Congress enacted substantial cuts to the regular income tax.

The American Taxpayer Relief Act of 2012 enacted a permanent AMT fix by establishing a higher AMT exemption amount, indexing the AMT parameters for inflation, and allowing specified tax credits under the AMT. As a result, the number of AMT taxpayers fell from 4.5 million in 2012 to about 4.0 million in 2013. That number grew modestly to 5.1 million in 2017. 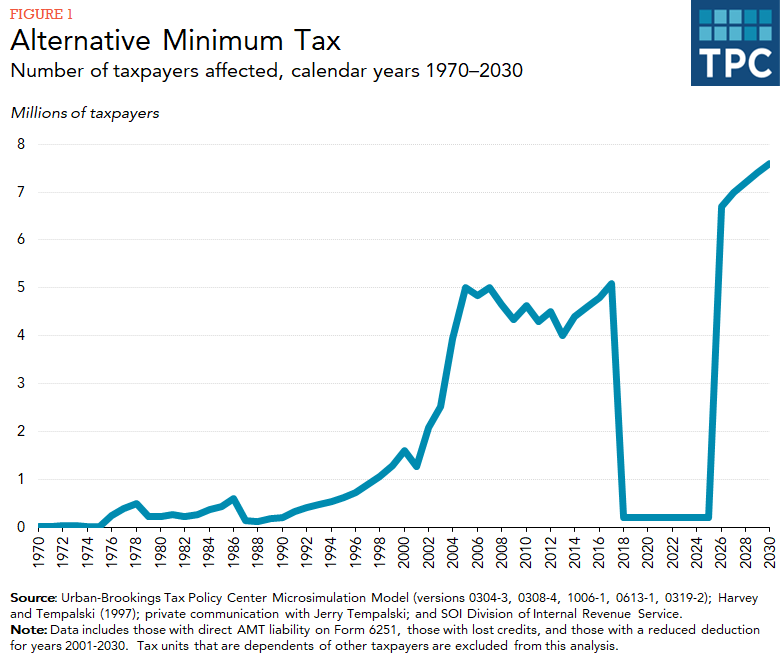 The 2017 Tax Cuts and Jobs Act (TCJA), included provisions that significantly reduced the impact of the AMT. The TCJA enacted a higher AMT exemption and a large increase in the income at which the exemption begins to phase out. It also repealed or scaled back some of the largest AMT preference items—personal exemptions, the state and local tax deduction, and miscellaneous deductions subject to the 2 percent of adjusted gross income floor—further limiting the AMT’s scope. As a result, TPC estimates that the number of AMT taxpayers fell to just 200,000 in 2018 and will remain roughly constant through 2025.

The AMT provisions, along with almost all other individual income tax measures in TCJA, are set to expire at the end of 2025. Thus, barring legislation from Congress, the AMT will return in force in 2026, affecting 6.7 million taxpayers. That number will rise to 7.6 million by 2030.

After calculating their regular income tax, some middle- and upper-income taxpayers must add AMT “preference items” to their taxable income, subtract an AMT exemption amount, and recalculate their tax using the AMT tax rate structure. AMT liability is the excess, if any, of this amount over the amount of tax owed under the regular income tax rules.

Before the enactment of the TCJA, some of the larger AMT preference items included the deduction for state and local taxes (62 percent of all preferences in 2012 according to data from the US Department of the Treasury), personal exemptions (21 percent), and the deduction for miscellaneous business expenses (9.5 percent). Because TCJA temporarily repealed the latter two provisions and capped the deduction for state and local taxes at $10,000, other preferences, such as the standard deduction and the special AMT rules for the treatment of net operating losses, depreciation, and passive losses, will become more important through 2025.

The AMT has two tax rates. In 2020, the first $197,900 of income above the exemption is taxed at a 26 percent rate, and income above that amount is taxed at 28 percent. The AMT exemption begins to phase out at $1,036,800 for married couples filing jointly and $518,400 for singles, heads of household, and married couples filing separate returns. TCJA dramatically increased the exemption phaseout threshold, which was $160,900 for married couples ($120,700 for singles and heads of households) in 2017. Because the exemption phases out at a 25 percent rate, it creates a top effective AMT tax rate of 35 percent (125 percent of 28 percent). All values are in current dollars, and the 2020 values are indexed annually for inflation using the chain-weighted consumer price index. 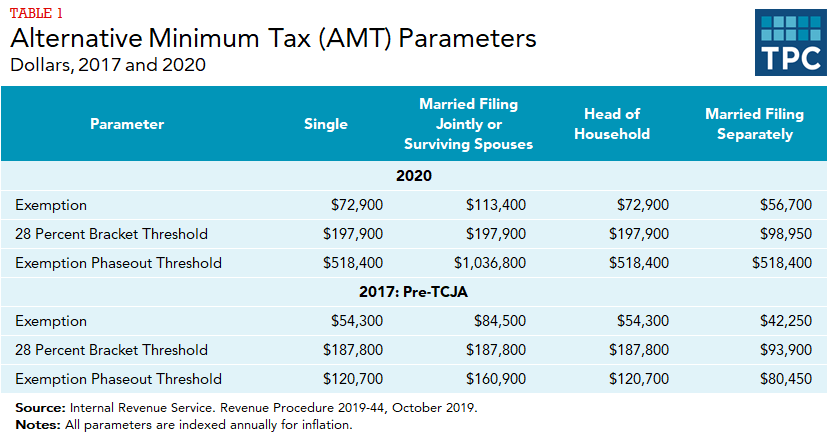