What are the consequences of the new US international tax system?

What are the consequences of the new US international tax system?

Despite enactment of the 2017 Tax Cuts and Jobs Act, which reduced these incentives, current rules still encourage US multinational firms to earn and report profits in low-tax foreign countries, enable both US- and foreign-based firms to shift profits earned in the United States to other countries, and encourage companies to incorporate in foreign jurisdictions.

INCENTIVES TO EARN AND REPORT PROFITS IN LOW-TAX COUNTRIES

Multinational corporations typically operate overseas through foreign subsidiaries that are mostly taxed as independent corporate entities. This separate entity system gives multinationals incentives to shift reported profits to their affiliates in low-tax jurisdictions by underpricing sales to them and overpricing purchases from them.

For tax-reporting purposes, most governments require firms to use an “arm’s length” standard, setting prices for transactions within the corporate group (“transfer prices”) equal to the prices that would prevail if the transactions were between independent entities. Yet ample room remains for firms to manipulate transfer prices, especially for intangible assets such as patents that are unique to the firm and for which there is no easily established market price.

Leading multinationals often shift the ownership of their intangibles, which generate a large share of their worldwide profits, to affiliates in very low tax jurisdictions, such as Ireland and Singapore. Through complex transactions, multinationals can then shift reported profits from these jurisdictions to countries with no corporate income tax, such as Bermuda and the Cayman Islands. Typically, multinationals generate very little real economic activity—as measured by output, employment, sales, or investments in plant and equipment—in tax-free jurisdictions.

Before the 2017 Tax Cuts and Jobs Act (TCJA), US multinationals booked a disproportionate share of their profits in low-tax locations. In 2017, US multinationals reported over 40 percent of their overseas profits in three low-tax countries: the Netherlands, Ireland, and Luxembourg (figure 1). The top 10 foreign locations of their profits, including other low-tax countries such as Bermuda, Switzerland, Singapore, the UK Caribbean Islands, and the United Kingdom, accounted for over four-fifths of their non-US profits. 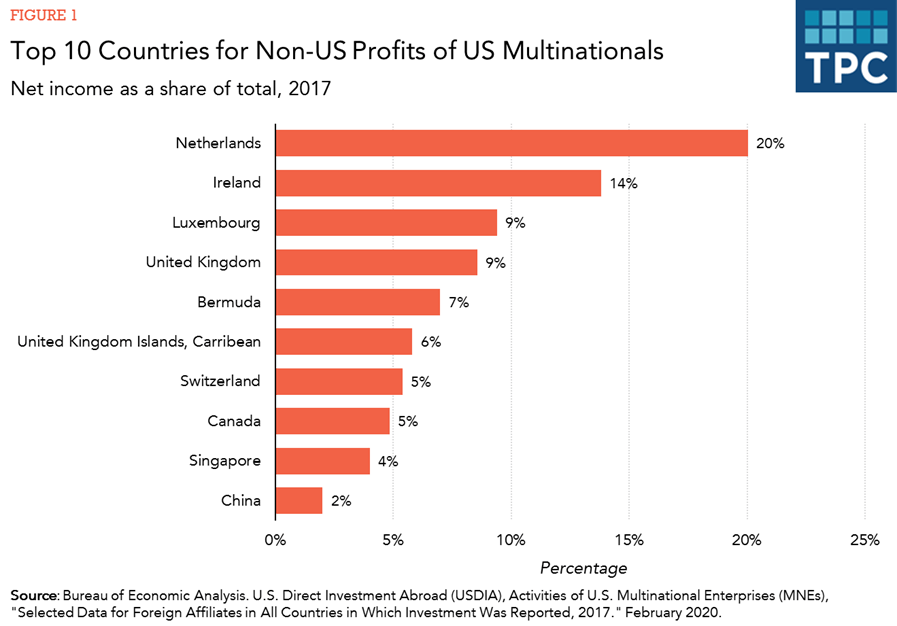 Despite evidence that firms shift the location of real economic activity in response to tax-rate differences among countries, a substantial share of US multinationals’ real activity remains in high-tax countries. These are mostly large economies with close ties to the United States (figure 2). Before TCJA, the effective corporate tax rates on new investments in such countries was slightly lower than the US rate.

The TCJA substantially reduced, but did not eliminate, the incentive for US corporations to shift profits to tax havens. It did this by introducing a new minimum tax on Global Low Tax Intangible Income (GILTI) at 10.5 percent beginning in 2018, increasing to 13.125 percent in 2026. The GILTI rate remains below the 21 percent US corporate rate and the rate in other countries in the G7 (which ranges from 19 percent in the United Kingdom to 34 percent in France). The TCJA also reduced incentives for US companies to hold intangible assets in low-tax foreign countries by providing a special rate (13.125 percent beginning in 2018 and 16.406 percent beginning in 2026) for export income from intangible assets held in the United States (Foreign Derived Intangible Income).

How the TCJA affects the location of reported profits and real activities of US multinationals overseas will not be known for several years. However, we can expect that over time US companies will report lower shares of their profits in low-tax countries with little economic activity.

The United States bases its definition of corporate residence on place of incorporation. This definition need not be consistent with where a company’s production and employment is located, where its sales take place, where its shareholders reside, or even where its top managers live.

For some firms, the tax benefits of foreign residence, combined with the lack of economic substance to the residence definition, have led them to shift the formal incorporation of their parent companies overseas. This type of transaction (“inversion”) can often be accomplished without changing the location of any real business activities.

Over the years, Congress has enacted rules to limit inversions. A company can still “redomicile,” though, by merging with a foreign-based company under certain conditions, including that the original foreign company contribute at least 20 percent of the shares of the new merged company if other conditions are not met. The TCJA added new provisions to penalize new inversions. In exchange for the TCJA eliminating the tax on repatriated dividends, it imposes a 35 percent transition tax on overseas assets that newly inverted firms held before the TCJA. Other US companies with foreign assets pay a comparable transition tax at 15.5 percent for cash and 8 percent for other assets. The TCJA also introduced other penalties on newly inverted firms, including a provision that makes dividends to shareholders taxable as ordinary income instead of at the preferred rates generally applied to qualified dividends and long-term capital gains.

The US Department of the Treasury (2016), however, has recently issued new regulations to deter earnings stripping through interest payments to foreign-related parties and the Base Erosion and Anti-abuse Tax (BEAT), enacted as part of TCJA, imposes a minimum tax on a base that disallows deductions for certain payments, including interest, to foreign-related parties. Both Treasury regulations and BEAT aim to limit foreign-resident multinationals’ ability to shift profits out of their US affiliates, although BEAT also affects US-resident companies.

Bureau of Economic Analysis. “Operations of US Parent Companies and their Foreign Affiliates, 1981–2013.”

Grubert, Harry. 2012. “Foreign Taxes and the Growing Share of US Multinational Company Income Abroad: Profits, Not Sales, Are Being Globalized.” Washington, DC: Office of Tax Analysis.