What is the child tax credit?

What is the child tax credit?

For 2021, the Child Tax Credit provides a credit of up to $3,600 per child under age 6 and $3,000 per child from ages 6 to 17. If the credit exceeds taxes owed, families may receive the excess amount as a refund. The credit will also be available periodically throughout the year starting as early as July, rather than as a lump sum at tax time.

Other dependents—including children aged 18 and full-time college students ages 19–24—can receive a nonrefundable credit of up to $500 each.

The American Rescue Plan increased the Child Tax Credit (CTC) for 2021. Tax filers can claim a CTC of up to $3,600 per child under age 6 and up to $3,000 per child ages 6 to 17. There is no cap on the total credit amount that a filer with multiple children can claim. The credit is fully refundable – low-income families qualify for the maximum credit regardless of how much they earn. If the credit exceeds taxes owed, families can receive the excess amount as a tax refund.

Only children who are US citizens are eligible for these benefits. The credit phases out in two steps. First, the credit begins to decrease at $112,500 of income for single parents ($150,000 for married couples), declining in value at a rate of 5 percent of adjusted gross income over that amount until it reaches pre-2021 levels. Second, the credit’s value is further reduced by 5 per-cent of adjusted gross income over $200,000 for single parents ($400,000 for married couples) (figure 1, blue lines).

In 2022, the credit is set to revert to its prior-law levels. Under those rules, which were established by 2017’s Tax Cuts and Jobs Act (TCJA), taxpayers could claim a CTC of up to $2,000 for each child under age 17. The credit would decrease by 5 percent of adjusted gross income over $200,000 for single parents ($400,000 for married couples). If the credit exceeded taxes owed, taxpayers could receive up to $1,400 as a tax refund known as the additional child tax credit (ACTC) or refundable CTC. However, under the TCJA rules, the ACTC would be limited to 15 percent of earnings above $2,500, which means filers with very low income could not claim the credit or they could claim a reduced credit (figure 1, grey line).

The TCJA also created a $500 credit available to any dependent who is not eligible for either the $3,600 or $3,000 credits for children under age 18 (or under prior law, the $2,000 CTC for children under 17). Before 2018, these individuals would not have qualified for a CTC but would have qualified for a dependent exemption, which was eliminated by the 2017 Tax Cuts and Jobs Act (TCJA). Dependents eligible for this credit include children age 18 (and age 17 under the TCJA rules) and children ages 19–24 who were in school full time in at least five months of the year. Older dependents (which make up about 6 percent of dependents eligible for the CTC) as well as some children who are not US citizens qualify for the $500 credit, referred to as the other dependent credit on tax forms (figure 1, yellow line).

The TCJA is set to expire after 2025, meaning the CTC is scheduled to revert to its pre-TCJA form. 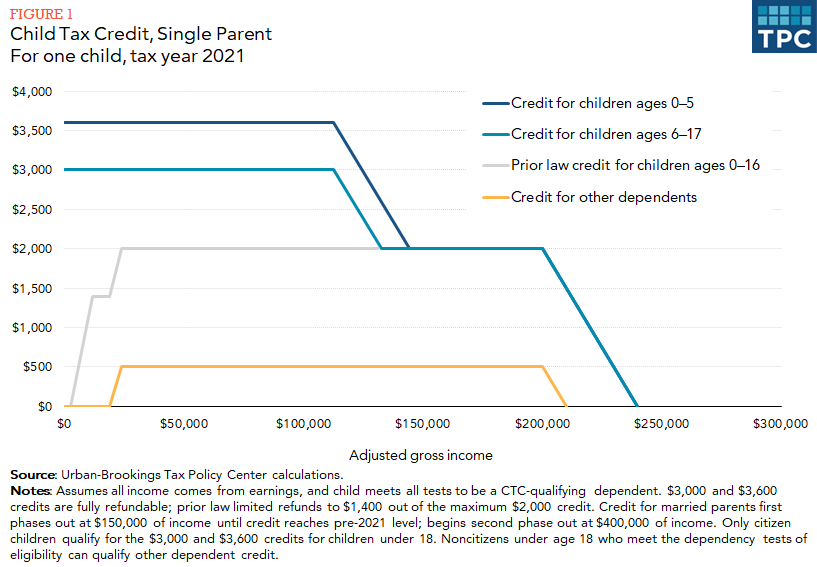 IMPACT OF THE CTC

The Tax Policy Center estimates that 92 percent of families with children will receive an average CTC of $4,380 in 2021 (the average credit can exceed the maximum per child credit because families can have more than one child). Under prior law, 89 percent of families with children received an average CTC of $2,310. Average credits were lower for all income groups, but particulary so for the lowest income families (figure 2). 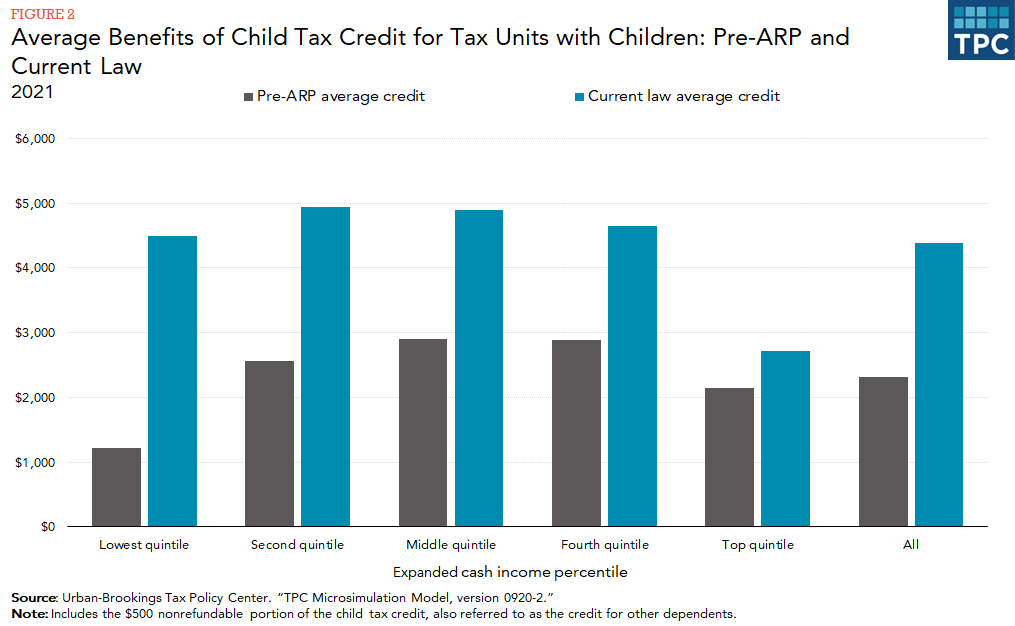 The American Rescue Plan directed the Internal Revenue Service to provide half of the refundable credit to families as periodic advance payments—starting as early as July 2021—instead of one lump sum when taxpayers file their returns. Delivering a portion of the expanded CTC periodically in 2021 (as opposed to during the tax season in 2022) is projected to reduce child poverty from 13.7% to 11.3% (Wheaton, Minton, Giannarelli, and Dwyer 2021.)

HISTORY OF THE CTC

The American Taxpayer Relief Act of 2012 increased the CTC from $500 per child to $1,000 per child. It also temporarily extended the provisions of the American Recovery and Reinvest-ment Act of 2009 (the anti-recession stimulus package) that reduced the earnings threshold for the refundable CTC from $10,000 (adjusted for inflation starting after 2002) to $3,000 (not ad-justed for inflation). The Bipartisan Budget Act of 2015 made the $3,000 refundability thresh-old permanent.

As noted earlier, The Tax Cuts and Jobs Act of 2017 doubled the CTC for children under 17 from $1,000 per child to $2,000 per child, effective in 2018. The refundable portion of the cred-it was limited to $1,400 per child. The refundable amount was indexed to inflation, but as of 2020, inflation had not increased enough to trigger the minimum increase. The legislation also allowed dependents who did not qualify for the $2,000 credit to qualify for a nonrefundable credit worth up to $500. The legislation is temporary and expires after 2025. At that point, the credit for children under 17 will revert to $1,000 per child, and other dependents will no longer be eligible for a CTC.