What are marriage penalties and bonuses?

What are marriage penalties and bonuses?

CAUSES OF MARRIAGE BONUSES AND PENALTIES

Marriage penalties and bonuses occur because income taxes apply to a couple, not to individual spouses. Under a progressive income tax, a couple’s income can be taxed more or less than that of two single individuals. A couple is not obliged to file a joint tax return, but their alternative—filing separate returns as a married couple—almost always results in higher tax liability. Married couples with children are more likely to incur marriage penalties than couples without children because one or both spouses could use the head of household filing status if they were able to file as singles. And tax provisions that phase in or out with income also produce marriage penalties or bonuses.

Couples in which spouses have similar incomes are more likely to incur marriage penalties than couples in which one spouse earns most of the income, because combining incomes in joint filing can push both spouses into higher tax brackets.

A couple with two incomes and no children, for example, could pay more taxes as a married couple if tax brackets for joint filers were less than twice as wide as for single filers. Today, that happens only for couples with income above $622,000, but it was more common before the 2017 Tax Cuts and Jobs Act.

A couple with children can still face a marriage penalty because single parents can use the head of household filing status. Consider parents of two children, each parent earning $100,000 (table 1). Filing jointly and taking a $24,800 standard deduction, their taxable income is $175,200, for which their 2020 income tax liability is $26,207. If they could file separately, one as single and the other as the head of a household, the single filer would owe a tax of $15,104 and the head-of-household filer would owe $8,245, yielding a total tax of $23,349. Their joint tax bill is thus $2,858 higher than the sum of their hypothetical individual tax bills, imposing on them a marriage penalty equal to 1.4 percent of their adjusted gross income. 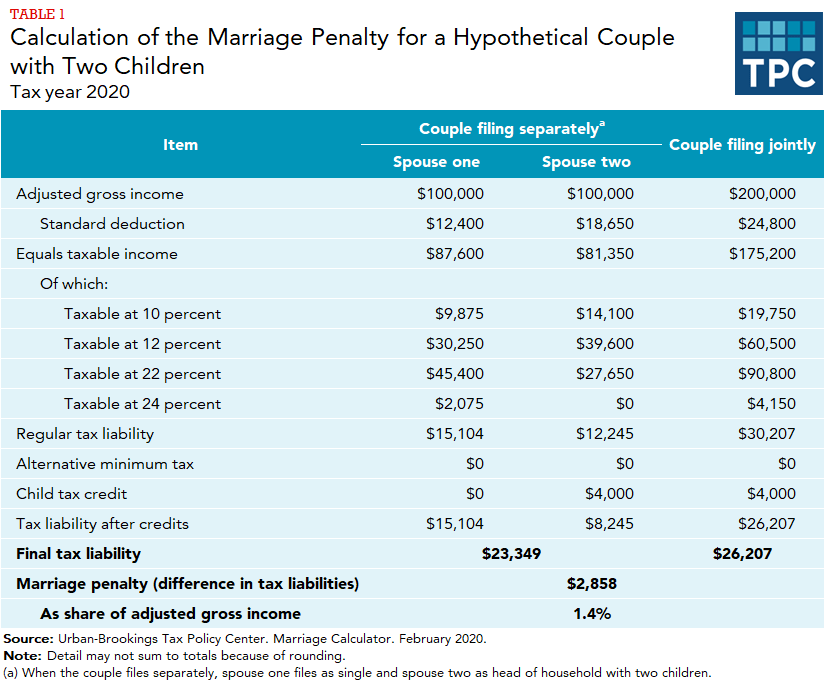 Couples in which one spouse earns all or most of a couple’s income rarely incur a marriage penalty and almost always receive a marriage bonus because joint filing shifts the higher earner’s income into a lower tax bracket.

Consider a couple with two children and $200,000 in total earnings, all earned by spouse two (table 2). Under 2020 tax law, filing a joint return rather than having spouse two file as head of household, will yield the couple a marriage bonus of nearly $7,400 as a result of two factors. First, because tax brackets for joint returns (other than the 35 percent bracket) are wider than those for head-of-household returns, much of the couple’s income is taxed at lower rates under joint filing than the 32 percent marginal rate that spouse two would pay filing separately. Second, the couple would benefit from an increased standard deduction. Couples filing jointly receive a $24,800 deduction in 2020, while heads of household receive $18,650. The combination of these two factors yields a marriage bonus of $7,399, or 3.7 percent of their adjusted gross income. 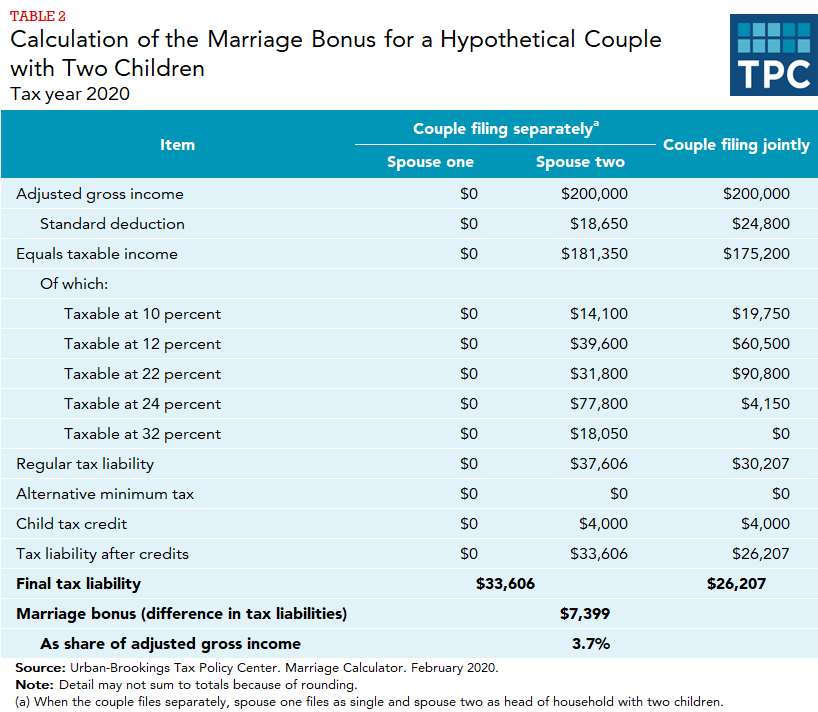 EFFECTS OF THE TCJA ON MARRIAGE PENALTIES AND BONUSES

The 2017 Tax Cuts and Jobs Act (TCJA) limited many of the marriage penalties higher-income earners face, though penalties certainly still exist. Except for the 35 percent bracket, all tax brackets for married couples filing a joint return are now exactly double the single brackets. This limits a main cause of previous marriage penalties. It also expands the potential for marriage bonuses, as more couples find that filing together moves some income into lower tax brackets. 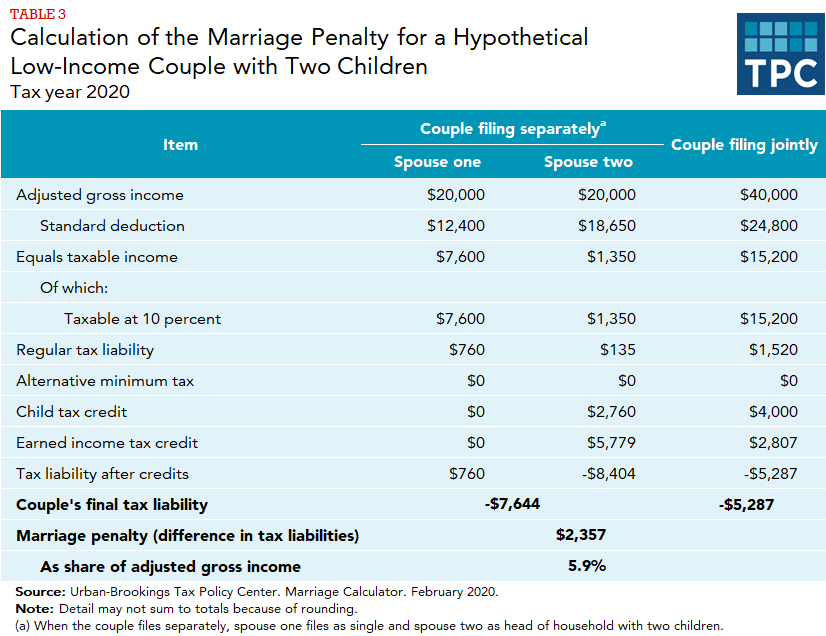 Taxpayers who might qualify for the earned income tax credit (EITC) can suffer particularly large marriage penalties if one spouse’s income disqualifies the couple. However, marriage can increase the EITC (a bonus) if a nonworking parent files jointly with a low-earning worker.

Consider a couple with two children and $40,000 in total earnings, split evenly between spouses (table 3). Two factors will cause them to incur a marriage penalty of $2,357 in 2020.

Second—and more significant—filing separate returns, the head of household could claim an EITC of $5,779 and a $2,760 child tax credit; the other spouse would get neither tax credit. On net, the head of household would receive a payment of $8,404 and the other spouse would pay $760, yielding a joint tax refund of $7,644. Filing jointly, the couple would get a smaller EITC of $2,807, somewhat offset by a larger child tax credit of $4,000. Thus, filing jointly, the couple will receive a payment of $5,287, or $2,357 less than the $7,644 they would have if they could have filed separately; the difference equals 5.9 percent of their adjusted gross income in 2020.

Marriage penalties are not confined to the tax system. Married couples often receive lower benefits from government programs than they would if they had not married. Moreover, the interaction of a tax penalty and a program-eligibility penalty can create effective marginal tax rates that approach 100 percent.

Steuerle, C. Eugene. 2006. “The Widespread Prevalence of Marriage Penalties.” Testimony before the US Senate Subcommittee on the District of Columbia, Committee on Appropriations, Washington, DC, May 3.