What are state balanced budget requirements and how do they work?

What are state balanced budget requirements and how do they work?

Balanced Budget Requirements (BBRs) are constitutional or statutory rules that prohibit states from spending more than they collect in revenue. They vary in stringency and design, and some research finds that stricter BBRs can produce “tighter” state fiscal outcomes, such as reduced spending and smaller deficits. However, they can also contribute to volatility and force states to cut services or raise taxes when their economies are already hurting. The effects of BBRs also depend critically on the details of the laws and implementation.

Balanced Budget Requirements (BBRs) have become a pillar of state budgeting practice over the last thirty years, requiring states to balance projected revenue with expenditures. In general, stricter BBRs, which prohibit states from carrying deficits into the following fiscal year, are associated with tighter fiscal outcomes, such as smaller deficits and more rapid spending adjustments during recessions.

While researchers have debated how to best classify the relative strength of a state’s BBR, recent research suggests a BBR is more binding if it meets at least one of the following requirements:

Most states have a strong BBR per this classification system (figure 1), and in general states have tended to strengthen their BBRs over time. 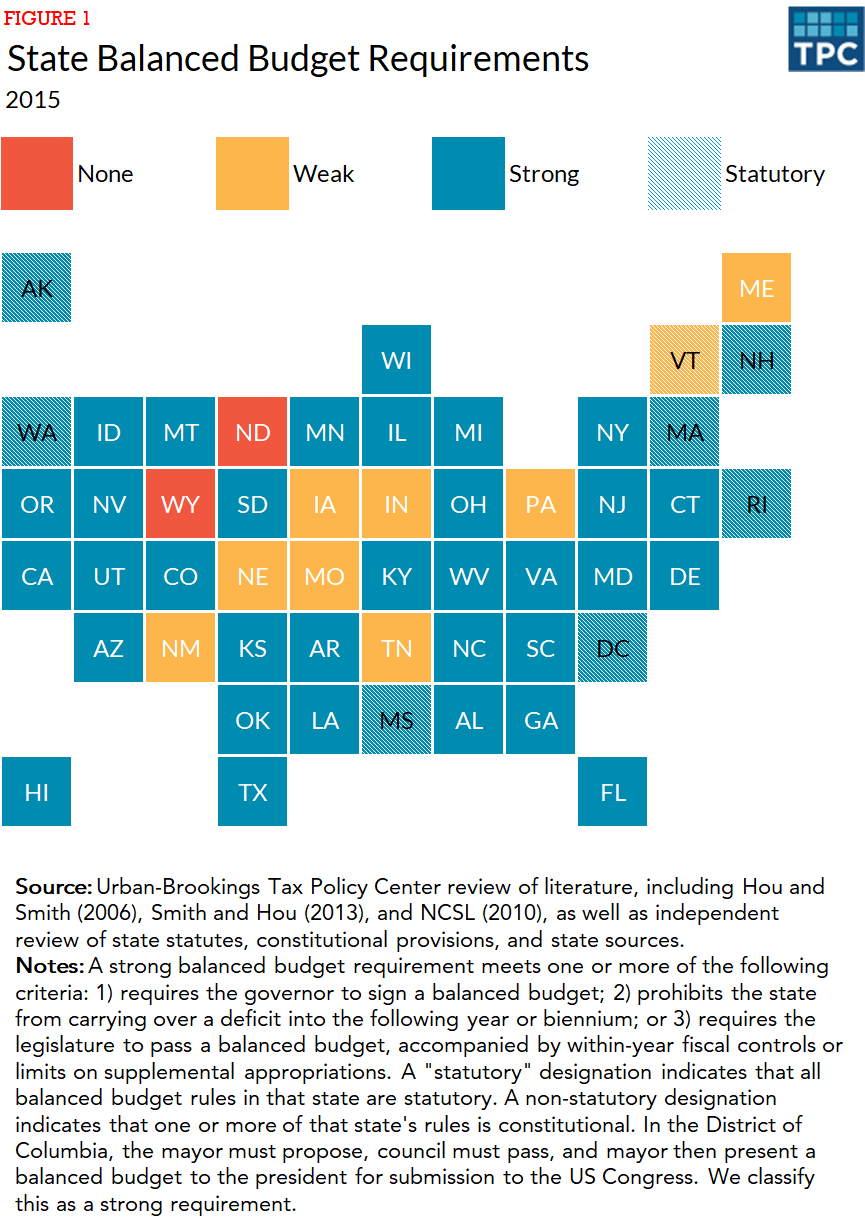 Under some circumstances, state policymakers can circumvent their BBRs. These rules typically apply to a narrowly defined share of total state spending, and government fund accounting practices can provide opportunities to shift obligations between funds or years.

For example, because BBRs are applied on a cash rather than accrual basis, states can push a payroll or state aid payment from the last month of the current fiscal year into the first month of the next. This allows states to meet the legal requirement to balance their budgets while leaving actual resources and obligations out of balance. During the 2009–10 budget cycle, for example, California moved its payroll obligation by one day to balance its budget.

These actions only produce one-time savings, however, as the state simply transfers its obligation to the following fiscal year. If a shortfall results from sudden changes in economic conditions, this flexibility can allow a state time to recover economically and meet its fiscal obligations. However, it can also lead to ongoing reallocation of expenses to the next budget year.

Strong antideficit provisions, such as those in BBRs, are associated with:

Fiscal and budgetary institutions like BBRs, particularly when enforced strongly, influence both the size and composition of states' responses to fiscal deficits.

Poterba (1994), for example, found that states with strict BBRs, which prohibited them from running deficits into the following year, were better able to adjust to deficit shocks, especially if one political party controlled both the governorship and the state house of representatives. States with weak antideficit provisions reduced spending by $17 for every $100 deficit overrun, comparedd with $44 in strong antideficit states (Poterba 1994).

More recent research continues to show that states with relatively strong BBRs cut their budgets more in response to deficits than states with weaker rules. This was true for the two decades preceding the 2008 recession, with even more pronounced effects between 2008 and 2015 (Rueben, Randall, and Boddupalli 2018) Additionally, in more recent years, states with strong balanced budget rules bridged less of their gap with revenue increases than in years prior, leaning more on spending cuts or possibly reserve funds to bridge gaps.

However, strict BBRs can also increase states’ fiscal and economic volatility, since they force a state to enact spending cuts or revenue increases when a state’s economy is already contracting (Bayoumi and Eichengreen 1995; Levinson 1998, 2007). These actions exacerbate, rather than counter, the effects of an economic contraction. During and following the Great Recession, for example, states with strong BBRs cut their budgets and raised revenues precisely when the economy and residents would benefit from states spending more and easing taxes.