What would the tax rate be under a VAT?

What would the tax rate be under a VAT?

The rate of a value-added tax depends on how much revenue it is intended to raise and how broad the VAT base is. The lower the revenue target and the broader the base, the lower the tax rate will be.

Value-added taxes (VATs) typically have a standard rate that applies to most goods and services. In 2019, the standard rate in the Organisation for Economic Co-operation and Development averaged about 19 percent (unweighted) but varied widely—27 percent, its highest, in Hungary, 20 percent in the United Kingdom, 15 percent in New Zealand, 10 percent in Australia, 8 percent in Japan, and 5 percent, its lowest, in Canada (figure 1). 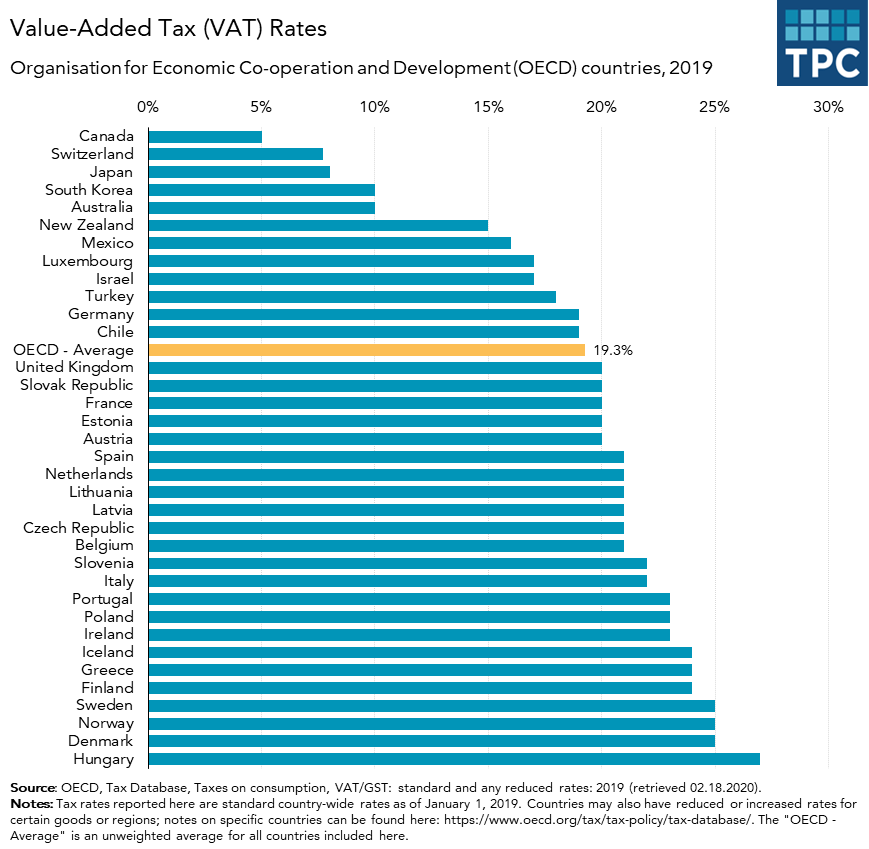 VATs typically provide preferential treatment for certain goods. Some goods are zero rated (the inputs are eligible for credits though the goods are not taxed upon sale), and some are exempt. Some are taxed at preferential rates. The VATs in European Union countries have narrow tax bases, with many goods or services receiving preferential treatment. Newer VATs, such as in New Zealand and Japan, tend to apply a lower standard rate to a broader base of goods and services. The broader the base, the lower the tax rate will be for a given revenue target.

Toder and Rosenberg (2010) estimated that the United States could have raised gross revenue of $356 billion in 2012 through a 5 percent VAT applied to a broad base that included all consumption except spending on education, Medicaid and Medicare, charitable organizations, and state and local government—capturing about 80 percent of consumption. That revenue would equal about 2.3 percent of GDP. If the same 5 percent rate applied to a narrow base that also excluded housing consumption, food consumed at home, and private medical expenses (out-of-pocket expenses and insurance premiums) —capturing about 50 percent of consumption—revenues would have been $221 billion, equal to about 1.4 percent of GDP.

Organisation for Economic Co-operation and Development. 2019. Taxes on Consumption. “VAT/GST: Standard and Any Reduced Rates (2019).”