What are municipal bonds and how are they used?

What are municipal bonds and how are they used?

Municipal bonds (a term that encompasses both state and local government debt) are obligations that entitle owners to periodic interest payments plus repayment of principal at a specified date. States and localities (cities, townships, counties, school districts, and special districts) issue bonds primarily to pay for large, expensive, and long-lived capital projects.

State and local governments issue bonds to pay for large, expensive, and long-lived capital projects, such as roads, bridges, airports, schools, hospitals, water treatment facilities, power plants, courthouses, and other public buildings. Although states and localities can and sometimes do pay for capital investments with current revenues, borrowing allows them to spread the costs across multiple generations. Future project users bear some of the cost through higher taxes or tolls, fares, and other charges that help service the debts.

States and localities issue short-term debt or notes to help smooth uneven cash flows (e.g., when tax revenues arrive in April but expenditures occur throughout the year). They also issue debt on behalf of private entities (e.g., to build projects with public benefit or for so-called public-private partnerships).

HOW LARGE IS THE MUNI BOND MARKET?

At the end of 2019, state and local governments had $3.85 trillion in debt outstanding (figure 1). About 98 percent of this debt was long term or with a maturity of 13 months or longer, while the remaining 2 percent was short term. As in most years, roughly 40 percent of municipal debt was issued by states and 60 percent by local governments. 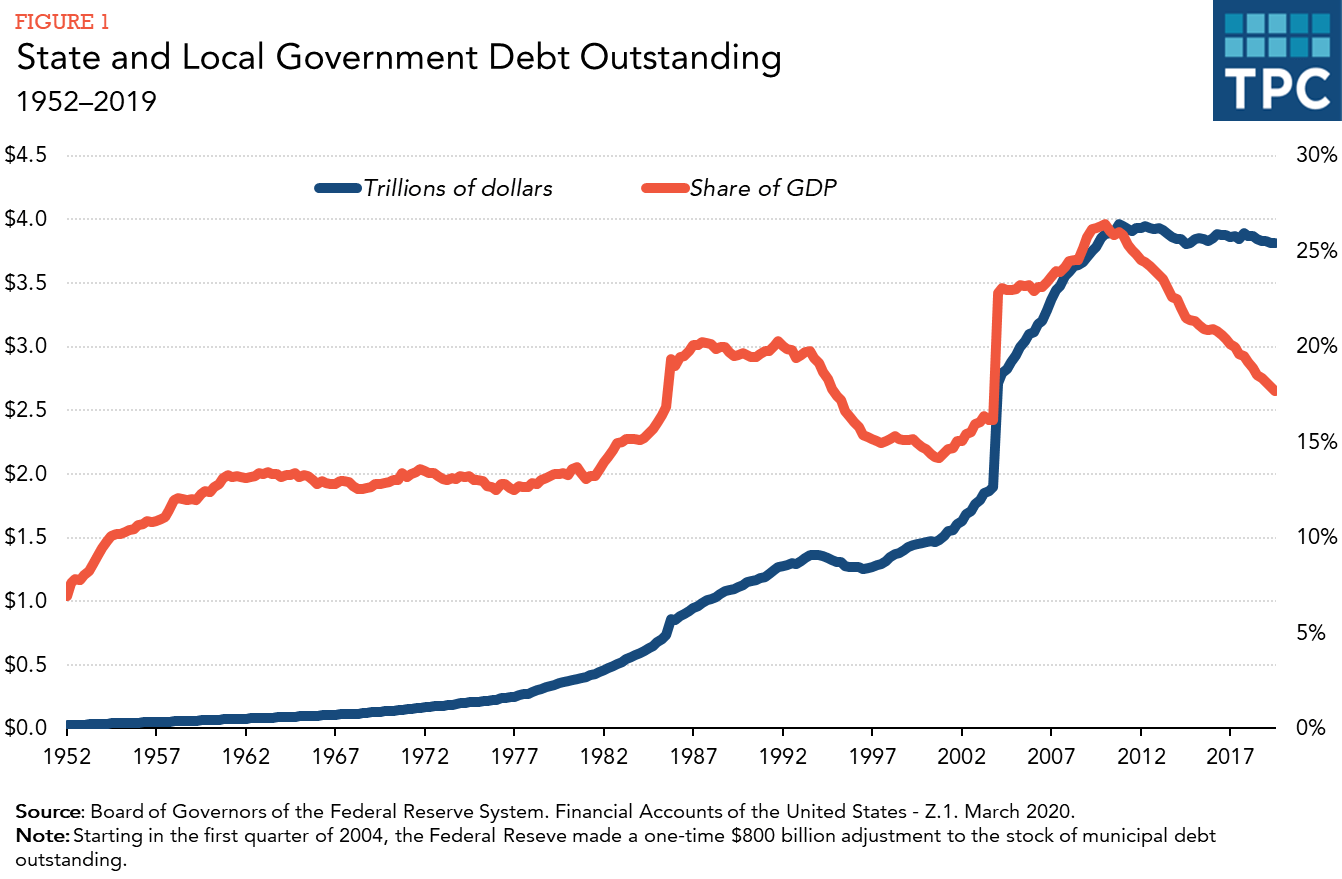 Although municipal debt has more than tripled in nominal terms since the mid-1980s, the change is less dramatic as a percentage of gross domestic product. 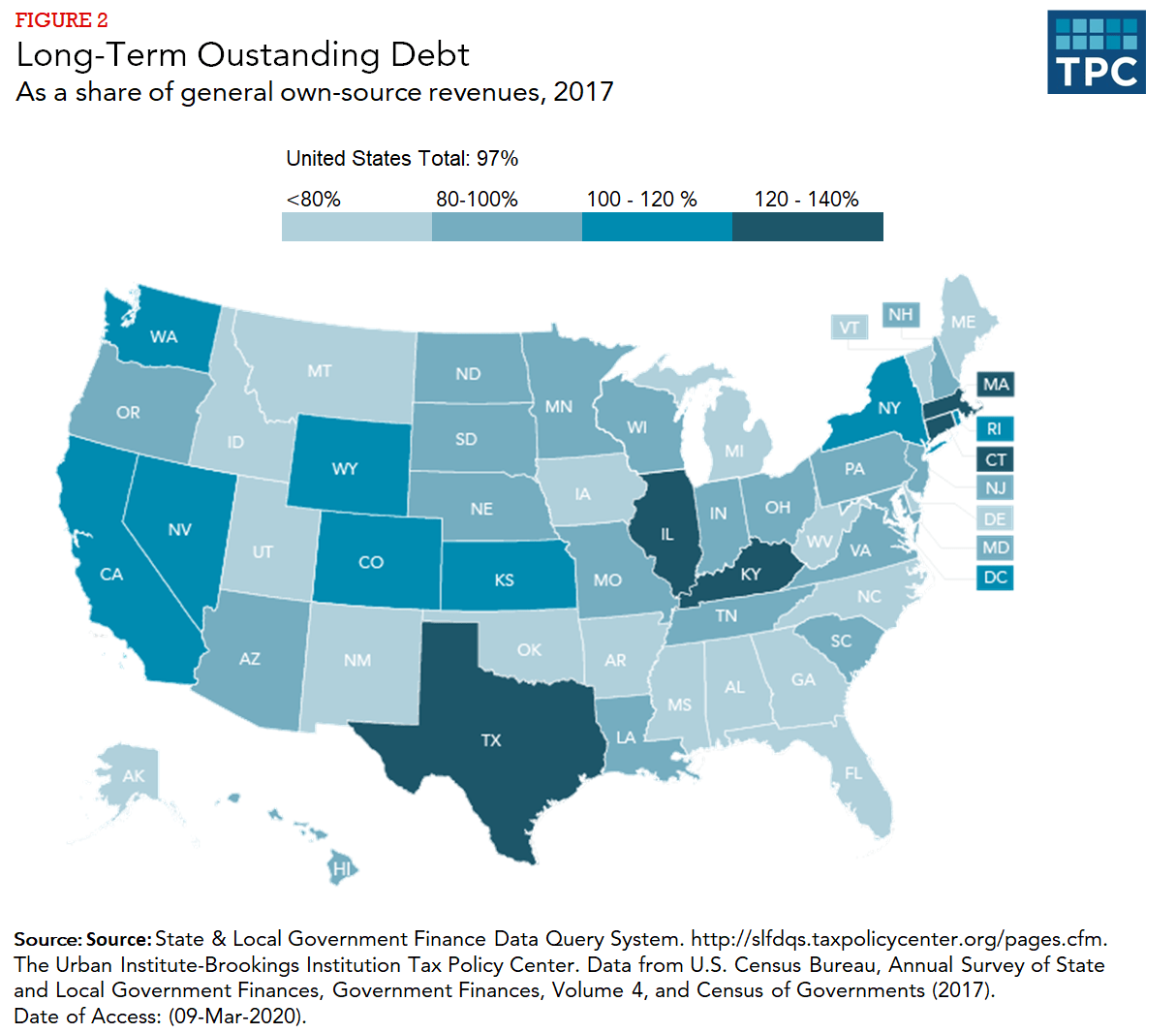 What Are the Main Types of State and Local Government Debt?

General obligation bonds are backed by an issuer’s “full faith and credit,” including its power to tax. Bonds may also be secured by future revenue streams, such as dedicated sales taxes or tolls and other user charges generated by the project being financed.

General obligation bonds typically require voter approval and are subject to limits on total debt outstanding. Revenue bonds and bonds secured by anticipated legislative appropriations are not subject to these requirements or limits. In 2018, roughly 58 percent of state and local issuances were revenue bonds, 36 percent were general obligation bonds, and 6 percent were private placements.

Most state and local bonds are held by households, followed by mutual funds (which also represent household investors) (figure 3). Banks and life insurance companies used to be more prominent municipal bond holders until the Tax Reform Act of 1986 and subsequent litigation limited the advantages of doing so. 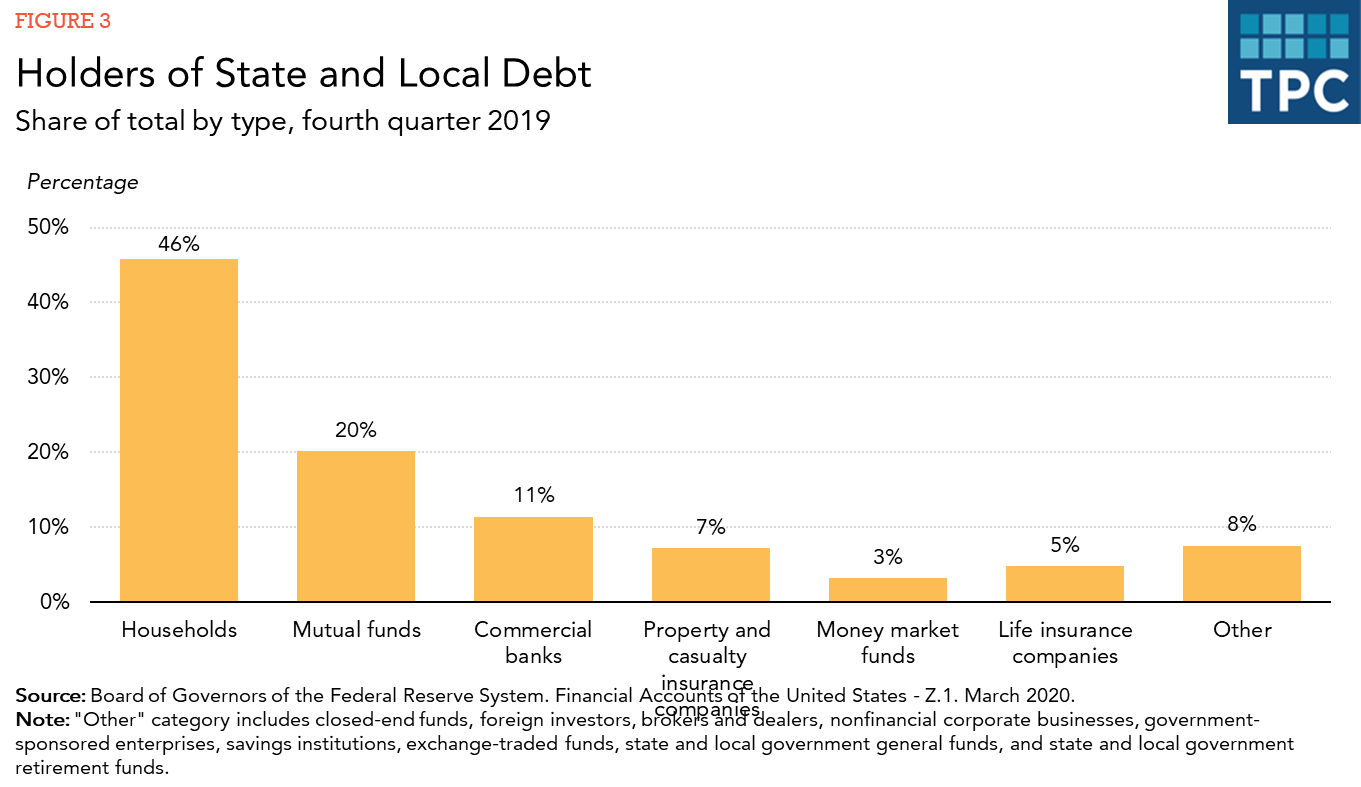 How Does the Federal Tax Exemption Work and What Are Proposals for Reform?

Because of the federal tax exemption, state and local governments can borrow more cheaply than other debt issuers, such as corporations, for a given level of risk and length of maturity. The federal tax exemption therefore functions as a federal subsidy to state and local public infrastructure investment. This subsidy comes at a cost in foregone tax revenues, estimated at $28 billion in fiscal year 2020.

The federal tax exemption has been criticized as inefficient because high-bracket taxpayers receive more than the inducement needed to purchase municipal bonds. In 2018, for example, a high-grade tax-exempt municipal bond yielded 3.53 percent. The yield for a comparable taxable corporate bond was 3.93 percent. Thus, taxpayers whose federal tax rate is about 10 percent should be just indifferent between the two types of bonds (the gap in yields—0.4 percentage points—is about 10 percent of 3.93 percentage points). Anyone in a higher tax bracket receives a windfall that generates no additional benefit for the borrower.

In light of this inefficiency, proposals have long circulated to cap the federal tax exemption, most recently by former Vice President Joe Biden among his 2020 campaign tax proposals. However, the revenue gain from eliminating or capping the deduction would depend on whether states and localities responded by issuing as many or fewer bonds and whether bondholders responded by shifting their portfolios toward taxable bonds or other investments (Poterba and Verdugo 2011). It is also difficult to hold constant all relevant bond features, including risk, time to maturity, fixed versus variable interest payments, and liquidity (Congressional Budget Office and Joint Committee on Taxation 2009).

Notably, President Donald Trump’s most recent budget proposals have not suggested a cap on the bond interest exemption.

Board of Governors of the Federal Reserve System. “Financial Accounts of the United States.” March 12, 2020.

Gordon, Tracy. 2011. “Buy and Hold (on Tight): The Recent Muni Bond Rollercoaster and What It Means for Cities.” Washington, DC: Urban Institute.