The Price We Pay for Capping the SALT Deduction

The rhetoric may be overheated, but state leaders have a point. Apart from being expensive, regressive, and unfair, the old SALT deduction had a lot to recommend it. Although imperfect, the SALT deduction encouraged states to spend more than they otherwise would on important public services and to tilt their revenue systems toward progressive income taxes. Both steps may have helped reduce income inequality. 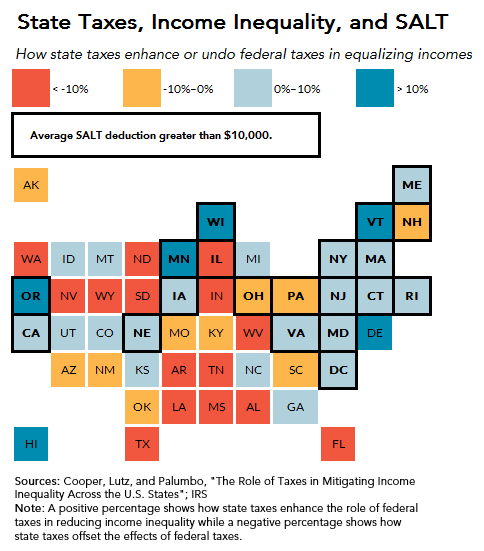 Some version of the SALT deduction has been part of every version of the federal income tax, including those before 1913. Although its original justification may been to avoid federal encroachment into state tax prerogatives and double taxation, the uncapped deduction had the effect of making it cheaper for states and localities to raise taxes on high-income people.

State and local governments could then use these revenues to invest more in roads, bridges, and people than without  the federal subsidy. This is important because when making tax and spending decisions, state and local politicians tend to think only of their constituents even though benefits extend across jurisdictional lines. Commuters rely on roads and bridges to get to work in a neighboring state. Kids who are educated in one state grow up and move to another.

Left to their own devices, states and localities may also invest only modestly in spending programs and tax benefits that benefit low-income residents. But Americans who care about providing struggling families with assistance might be willing to subsidize states and localities to do more.

The tax code may not be the best way for the federal government to encourage  state and local governments to take into account these external benefits. A better solution may be a system of matching grants, where the feds kick in some money for each dollar a state or locality spends. That’s a reform worth pursuing, but the current system of federal grants does a lousy job equalizing differences  in the ability of states to raise revenue and pay for services.

It’s a little odd for fans of limited government to cheer the SALT deduction cap. Limiting the deduction does nothing to reduce the size of the overall public sector or to improve work or investment incentives. It merely reallocates the tax burden from federal to state and local governments.

Few federal taxpayers may cry tears for the Manhattan resident who can barely afford a $3,000 studio apartment. But economists have shown that if fewer Americans moved to places like New York City and the San Francisco Bay Area  the US economy would shrink by about 9 percent a year, or roughly $7,000 per American worker. The reason is agglomeration economies: when people and firms cluster together in a city, ideas spread, new businesses are born, and the cities grow faster and are more resilient.

Supporters of capping the SALT deduction have a credible argument on distributional grounds. Like the home mortgage interest and charitable contribution deductions, the uncapped SALT deduction flowed mainly to high-income taxpayers, even if some lost all or part of the benefit to the Alternative Minimum Tax (AMT) and other limits on itemized deductions.

The old SALT deduction also was  expensive, costing the US Treasury about $100 billion a year. That’s why limiting the SALT deduction has been part of every major tax reform proposal in recent memory.

However, there’s rich irony in the feds telling states to get their fiscal houses in order when they’ve just passed a $1.5 trillion deficit-financed tax cut and a budget-busting, two-year spending bill.

Would an uncapped SALT deduction be part of an ideal tax system if you were starting from scratch? Probably not. On efficiency grounds, there’s no reason to think high-income taxpayers’ marginal tax rate is the right rate at which to subsidize state and local investments in public works and the social safety net.

But we are not starting from scratch. The SALT deduction is an enduring feature of our federalist system and capping it comes at a cost. In the next version of tax reform, federal policymakers would do well to remember the effects of their actions not just on residents of particular states but on the priorities many Americans care about.