Who would bear the burden of a VAT?

Who would bear the burden of a VAT?

Although a value-added tax (VAT) taxes goods and services at every stage of production and sale, the net economic burden is like that of a retail sales tax. Sales taxes create a wedge between the price paid by the final consumer and what the seller receives. Conceptually, the tax can either raise the total price (inclusive of the sales tax) paid by consumers or reduce the amount of business revenue available to compensate workers and investors. Theory and evidence suggest that the VAT is passed along to consumers via higher prices. Either way, the decline in real household income is the same regardless of whether prices rise (holding nominal incomes constant) or whether nominal incomes fall (holding the price level constant). 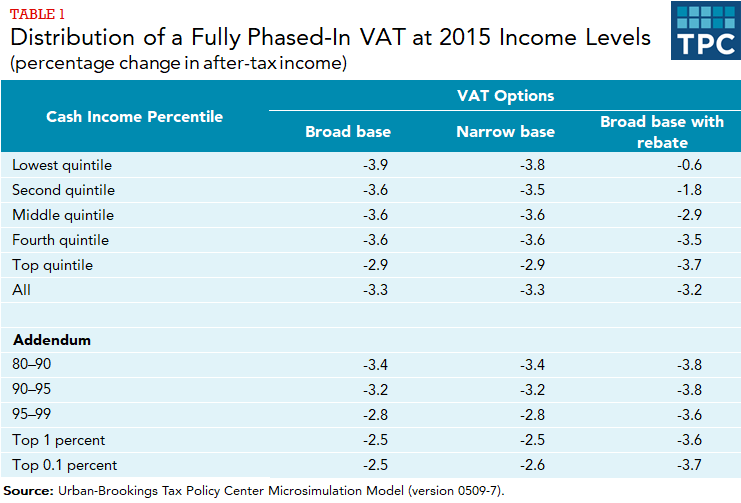 Exempting, zero rating, or excluding certain essential consumption goods from the tax base (e.g., foodstuffs, medicine, health care) can reduce the regressivity of a VAT. Giving preferential treatment to particular goods, however, is an inefficient way to make the tax less regressive because high-income households consume more of the goods in question (though less as a share of income) than low-income households do. A better approach is to provide a limited cash payment—that is, a demogrant or a refundable tax credit. That way, everyone receives the same benefit, in dollars, which translates into a larger share of low-income households’ income.

In the same study, Toder, Nunns, and Rosenberg simulate the effects of a 7.7 percent broad-based VAT with a refundable tax credit (the higher tax rate keeps the net revenues the same as the 5 percent, broad-based VAT with no tax credit). They find that the VAT in combination with the tax credit would impose an average tax burden of 0.6 percent on households in the bottom quintile of the income distribution. Households in the top 1 percent of the income distribution would face an average tax burden of 3.6 percent. Their results also show that the distribution of a narrow-based VAT that excludes spending on food, housing, and health care is much the same as the distribution of a broad-based tax (table 1).