What tax incentives exist to help families save for education expenses?

What tax incentives exist to help families save for education expenses?

Tax-favored accounts encourage families to save for education expenses by reducing or eliminating the tax normally owed. But there’s a catch: to reap significant benefits, families who use these accounts to save for college must invest in sheltered savings accounts years before they know whether their children will attend college. While these funds can be redirected toward another person’s educational expenses if the child does not go to college, savers must pay penalties to divert the money for noneducation purposes. The resulting uncertainty is greatest for low-income families because their children are least likely to attend college.

Higher-income families benefit more from tax-favored accounts because they avoid more taxes for each dollar contributed to a sheltered account. All families must pay income tax and a 10 percent penalty on money withdrawn from an account if the funds are used for purposes other than permitted educational expenses. However, even after paying the penalties, high-income families can still come out ahead because of the size of their tax savings and because the accounts let them shift ownership to their children, who typically face lower income tax rates. That benefit, of course, does not extend to low-income families, who are likely to be in the same tax bracket as their children. Tax-free accounts hold no benefit for families whose incomes are too low to require them to pay income taxes, but they are still subject to the penalty for using the funds for other purposes.

In 2019 families with adjusted gross income (AGI) below $110,000 ($220,000 if filing a joint return) can deposit up to $2,000 per beneficiary in a Coverdell account on an after-tax basis. Funds grow untaxed and may be withdrawn tax free if used to pay educational expenses. Coverdell account funds can be used for K–12 expenses as well as higher education.

Anyone, regardless of income, may contribute to a 529 plan for a designated beneficiary. As of 2019, a donor may contribute up to $15,000 annually for each beneficiary without triggering a gift tax, with the option of making up to five years of contributions in a single payment as long as no additional gifts are made during the five-year period. Income in 529 plans accumulates untaxed.

Since passage of the Economic Growth and Tax Relief Reconciliation Act of 2001, funds are not taxed when withdrawn from 529s, provided they are used to pay qualified expenses for postsecondary education (tuition, room and board, books and supplies, and technology). Donors retain ownership of the accounts but may use the funds to pay educational expenses only for the named beneficiary. The donor may, however, change beneficiaries if the new beneficiary is a member of the same family as the old beneficiary.

The 2017 Tax Cuts and Jobs Act expanded the qualified uses for tax- and penalty-free withdrawals from 529 plans to also cover K–12 elementary and secondary school tuition for public, private, and religious schools. 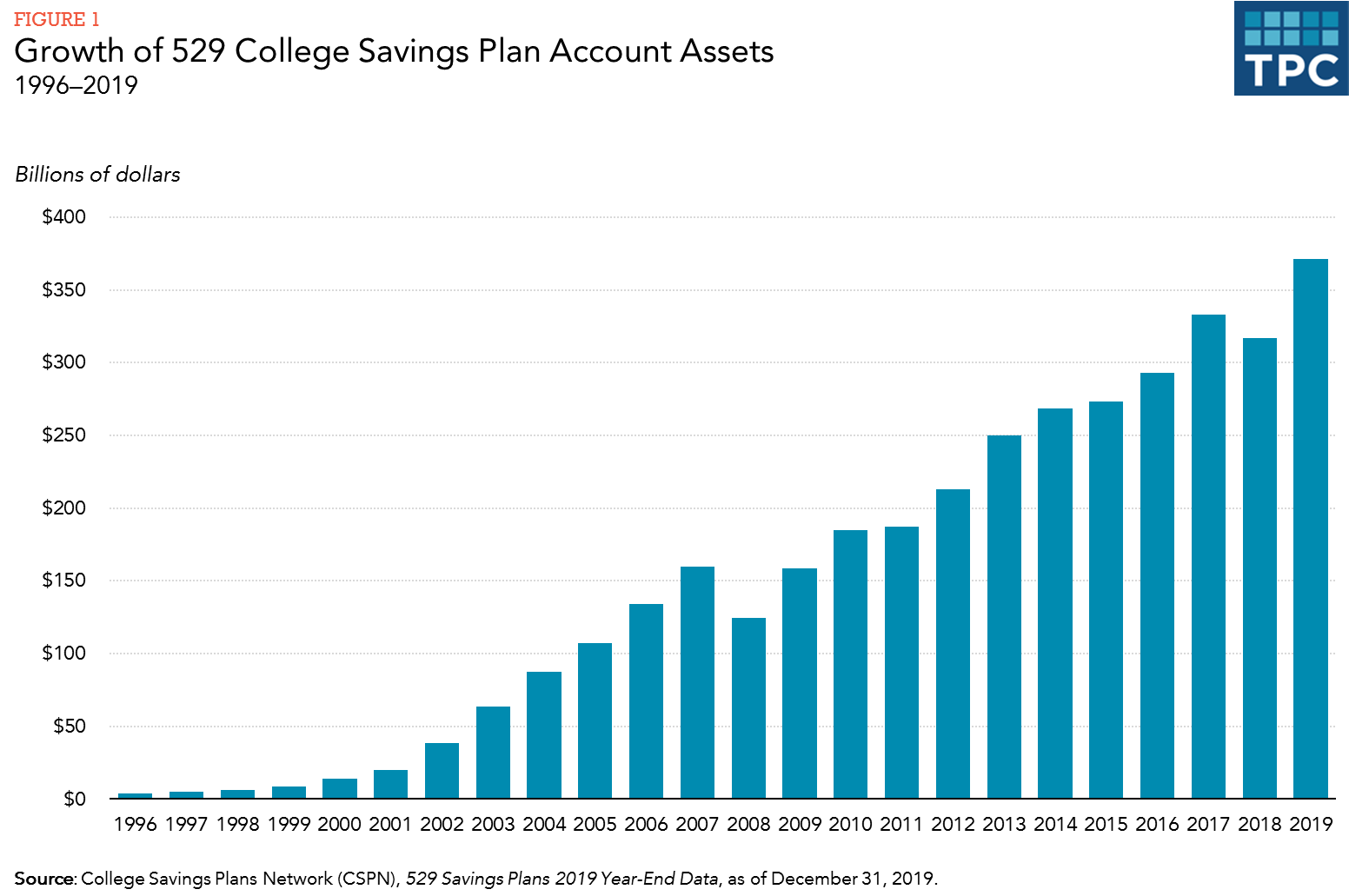 Every state except Wyoming sponsors a 529 plan (but Wyoming residents receive preferred treatment in the Colorado 529 plan). In states with a personal income tax, residents investing in their state-sponsored 529 plans often receive a state tax break for at least part of their investment. Families can choose to invest in plans from other states, which may be the best option for them—especially when contributions are not tax deductible. Some states, moreover, provide matching funds for contributions to 529 accounts. Beyond the state plans, there is also a separate private college 529 plan.

States that offer income tax credits or deductions for contributions to 529 college saving plans and exempt qualified distributions from 529 plans from state income taxes must decide whether they will follow the recent changes in federal rules for qualified withdrawals. Some states have decided to allow qualified withdrawals for K–12 tuition while others have not. For example, New York and Nebraska have issued public statements saying that only higher education expenses would qualify. In contrast, Pennsylvania will allow payment for K–12 tuition expenses to be processed through the PA 529 College Savings Program.

The federal government allows buyers to exclude interest on designated government bonds from income tax if the money is used to pay for postsecondary education. In 2018, however, families can only cash in these bonds tax free if their modified AGI (MAGI) is less than certain limits. The tax exclusion phases out for MAGI between $81,100 and $96,100 in 2019 (and between $121,600 and $151,600 for married couples). The income limits are indexed for inflation. This program is substantially smaller than the Coverdell and 529 programs.