What is the adoption tax credit?

What is the adoption tax credit?

The tax code provides an adoption credit of up to $14,300 for qualified adoption expenses in 2020. The credit is available for each child adopted, whether via public foster care, domestic private adoption, or international adoption. The total amount of adoption credits for 2018 is estimated to reach approximately $400 million.

“Special needs” adoptions automatically qualify for the maximum credit regardless of actual out-of-pocket expenses. For purposes of the credit, a child has special needs if a state’s welfare agency determines that the child cannot or should not be returned to his or her parents’ home and that the child probably will not be adoptable without assistance provided to the adoptive family. This provision is designed to encourage parents to adopt children who would otherwise be hard to place, even if most of the adoption expenses are covered by someone else (such as a public foster care program).

The adoption tax credit is nonrefundable but can be carried forward for up to five years. The credit is thus of little or no value to low-income families who pay little or no income tax over a period of years. The Patient Protection and Affordable Care Act of 2010 made the adoption tax credit refundable for 2010 and 2011. Concerned about the potential for fraud, the Internal Revenue Service (IRS) stepped up compliance efforts. The result, according to the National Taxpayer Advocate Service, was substantial delays for taxpayers, with 69 percent of all adoption credit claims filed in 2012 selected for audit. The IRS ultimately disallowed only 1.5 percent of claims, and 20 percent of the savings from the disallowed credits was spent on interest owed to taxpayers with delayed refunds. The credit reverted to nonrefundability in 2012.

COST OF THE CREDIT 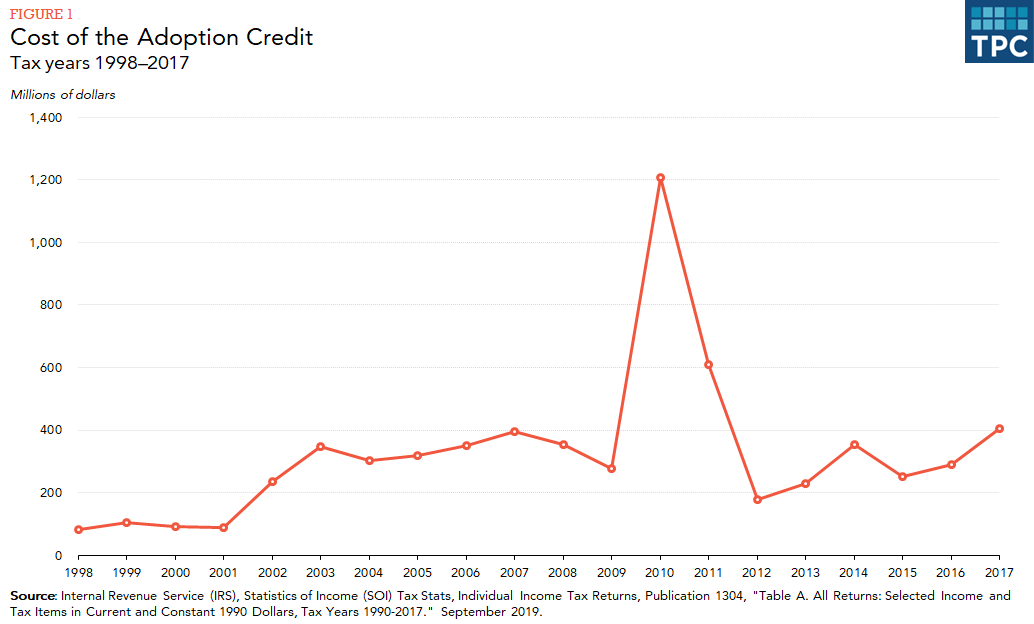 The distribution of the credit across income groups ranges from small amounts for low- and moderate-income households (because of their minimal tax liability and the credit’s nonrefundability) and the highest-income households (because of the income cap) to substantial amounts to those with upper-middle incomes. For example, in tax year 2017, the credit for those with incomes between $50,000 and $75,000 (one quarter of claimants) averaged $3,087 per adoption, while the average credit for households with incomes between $100,000 and $200,000 (about 30 percent of claimants) was $9,099 per adoption (table 1).

The most recent year with data available by adoption type (2004) indicates that nearly half of adoptions for which the credit was claimed were for domestic children without special needs, with only 18 percent classified as special needs, and the remainder reflecting international adoptions.

George, J. Russell. 2011. “Improper Payments in the Administration of Refundable Tax Credits.” Testimony before the Subcommittee on Oversight, House Committee on Ways and Means, Washington, DC, May 25.

National Taxpayer Advocate Service. 2012. “Most Serious Problems #7: The IRS’s Compliance Strategy for the Expanded Adoption Credit Has Significantly and Unnecessarily Harmed Vulnerable Taxpayers, Has Increased Costs for the IRS, and Does Not Bode Well for Future Credit Administration.” In 2012 Annual Report to Congress, volume 1, 111–33. Washington, DC: Taxpayer Advocate Service.