How do taxes affect the economy in the short run?

How do taxes affect the economy in the short run?

Primarily through their impact on demand. Tax cuts boost demand by increasing disposable income and by encouraging businesses to hire and invest more. Tax increases do the reverse. These demand effects can be substantial when the economy is weak but smaller when it is operating near capacity.

Economic activity reflects a balance between what people, businesses, and governments want to buy and what they want to sell. In the short run—focusing on the next one or two years—economic policy has greater impact on the demand side. When the economy is weak, for example, the Federal Reserve tries to boost consumer and business demand by cutting interest rates or purchasing financial securities. Congress, for its part, can boost demand by increasing spending and cutting taxes.

How much tax cuts boost demand (or tax hikes restrain it) depends on the sensitivity of household and business behavior—for example, how households divide increased after-tax income between consumption and saving, and whether businesses choose to hire and invest more. Economists summarize these effects in a simple measure, the output multiplier, expressing how many dollars of increased economic activity result from a dollar reduction in taxes or a dollar increase in government spending. The Congressional Budget Office (CBO) has estimated such multipliers for a mix of tax and spending policies (table 1). 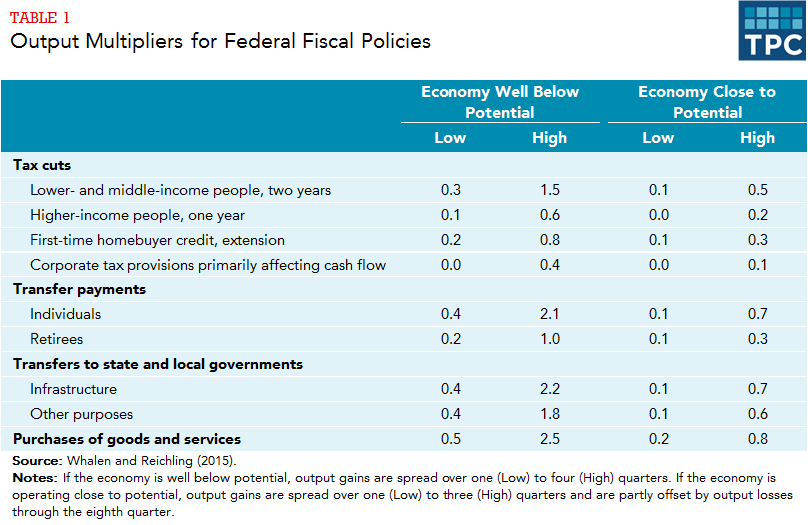 As these estimates suggest, the stimulus from tax cuts or spending increases depends on the strength of the economy. If it is operating close to potential and the Federal Reserve is not constrained by the zero lower bound on interest rates, fiscal policies will have a small short-run economic effect, largely because the Fed will offset fiscal stimulus with interest rate hikes. However, if the economy is far from potential and short-term interest rates are close to zero, fiscal stimulus can have significantly more impact because the Fed will not offset it. CBO estimates that fiscal multipliers are about three times larger when the economy is very weak than when it is strong.

CBO’s numbers illustrate substantial uncertainty in our understanding of how fiscal policies affect the economy. For a two-year tax cut aimed at lower- and middle-income households, for example, CBO’s low estimate of the multiplier (0.3) is just one-fifth the size of its high estimate (1.5).

But some things are clear. CBO’s estimates suggest that, dollar for dollar, tax cuts are often a less effective means of stimulus than are spending increases. If the federal government purchases goods and services itself (or helps state and local governments do so), most or all of the spending will boost demand. If the government cuts personal taxes, however, a substantial amount of the added spending power leaks into saving. That dampening effect can be moderated by targeting tax cuts to lower- and middle-income households, which are less likely to save.

Tax policies can also affect the supply of labor in the short run. A cut in payroll taxes could bring some workers into the labor market or encourage those already working to put in more hours. Such supply changes have little effect on output if the economy is operating well below potential. Under those conditions, people have difficulty finding more work even if they want it. If the economy is operating near potential, however, increased labor supply can translate to increased output.

The Tax Policy Center (TPC) model of short-run economic effects differs slightly in approach compared to CBO’s but is designed to produce similar estimates. The CBO model estimates direct effects on demand based on generic policy types, as in table 1. The TPC model instead derives effects on after-tax incomes from TPC’s distributional tables. TPC used this model to estimate the short-run economic and revenue effects of the Tax Cuts and Jobs Act.