What is the Highway Trust Fund, and how is it financed?

What is the Highway Trust Fund, and how is it financed?

The Highway Trust Fund finances most federal government spending for highways and mass transit. Revenues for the trust fund come from transportation-related excise taxes, primarily federal taxes on gasoline and diesel fuel. In recent years, however, the trust fund has needed significant transfers of general revenues to remain solvent.

The Highway Trust Fund tracks federal spending and revenue for surface transportation. The trust fund has separate accounts for highways and mass transit. Because obligations from the trust fund generally are for capital projects that take several years to complete, outlays reflect projects authorized by Congress in previous years.

The Congressional Budget Office estimates that Highway Trust Fund tax revenue will total $43 billion in fiscal year 2020 (figure 1). Revenue from the federal excise tax on gasoline ($25.8 billion) and diesel fuel ($10.5 billion) accounts for 84 percent of the total. The remaining trust fund tax revenue comes from a sales tax on tractors and heavy trucks, an excise tax on tires for heavy vehicles, and an annual use tax on those vehicles. In addition to dedicated tax revenue, the trust fund receives a small amount of interest on trust fund reserves. 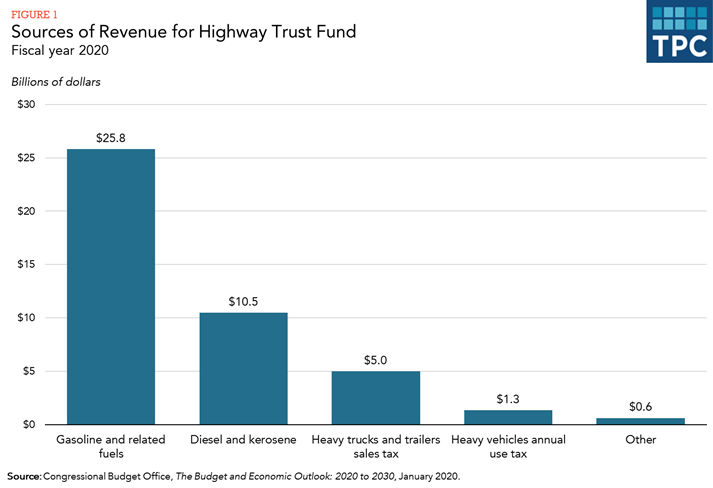 Before 2008, highway tax revenue dedicated to the trust fund was sufficient to pay for outlays from the fund, but that has not been true in recent years. Since 2008, Congress has sustained highway spending by transferring over $140 billion of general revenues to the fund, including $70 billion in the Fixing America’s Surface Transportation Act in 2015.

Those transfers will enable the trust fund to meet spending obligations through 2020, but projected shortfalls will appear again by the end of 2021 (figure 2). The Congressional Budget Office projects that, by 2030, outlays from the Highway Trust Fund will exceed trust fund reserves by a cumulative $134 billion for the highway account and by $54 billion for the mass transit account, even if expiring trust funds taxes are extended (Congressional Budget Office 2020). 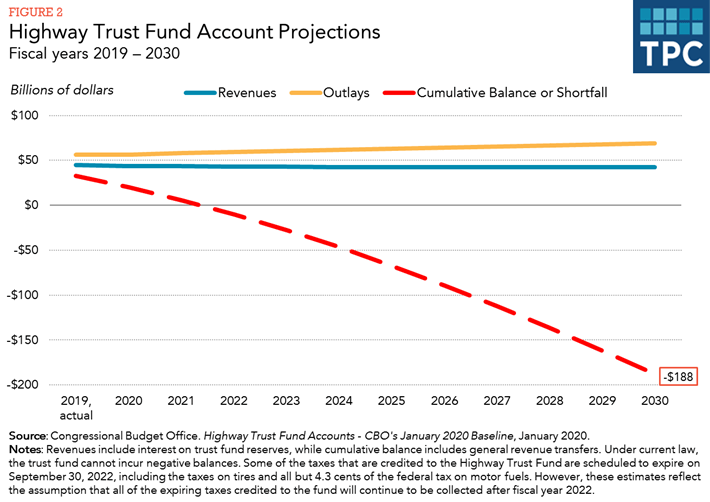 Congress could pay for projected highway and mass transit spending by simply raising the federal tax rate on gasoline and diesel fuel. A one cent increase in motor fuels taxes dedicated to the Highway Trust Fund would raise trust fund revenues by between $1.5 billion and $1.7 billion annually (Kile 2015). (Higher motor fuels taxes would increase costs for businesses, thus lowering business profits, employee wages, and the federal taxes collected on that income. The estimated increase in Highway Trust Fund revenues does not include the reduction in federal revenues from other sources.)

Drivers likely would respond to an increase in motor fuels taxes by driving less, which would reduce pollution and lessen the need for highway construction and maintenance. But drivers may also respond by driving more fuel-efficient vehicles, which would weaken the incentive to reduce miles driven.

Motor fuels taxes link highway use with the associated costs of building and maintaining roads as well other costs associated with fuel consumption, such as pollution and dependence on foreign oil. But motor fuels taxes are an imperfect user fee because they do not differentiate among vehicles that cause greater or lesser road wear for the same amount of fuel consumed or between travel on crowded and uncrowded roads.

A tax on vehicle miles driven would provide a more direct link to the cost of highway use but, unlike an increase in the tax on motor fuels, would be difficult to implement, requiring new tolls or electronic motoring of vehicles. An advantage of a vehicle mileage tax is that it could adjust to reflect the additional costs of congestion by increasing tolls or the tax rate in certain locations and at certain times of the day. A vehicle mileage tax would not, however, provide an incentive for driving more fuel-efficient vehicles.

Alternatively, Congress could abandon the user-pay principle and simply pay for highways through general revenues. Highway spending would no longer have a dedicated source of revenue and would instead compete with other spending programs for general revenue funding through the annual appropriations process. Or Congress could decide to limit federal highway spending to the amount of revenue collected from exiting motor fuels taxes. This would require curtailing some existing highway projects and not starting others, at a time when the nation’s infrastructure is already in need of repair.

Kile, Joseph. 2015. “Testimony on the Status of the Highway Trust Fund and Options for Paying for Highway Spending.” Testimony before the US Senate Committee on Finance, Washington, DC, June 18.