How does the corporate income tax work?

How does the corporate income tax work?

The United States imposes a tax on the profits of US resident corporations at a rate of 21 percent (reduced from 35 percent by the 2017 Tax Cuts and Jobs Act). The corporate income tax raised $230.2 billion in fiscal 2019, accounting for 6.6 percent of total federal revenue, down from 9 percent in 2017.

The United States taxes the profits of US resident C-corporations (named after the relevant subchapter of the Internal Revenue Code) at 21 percent.

Taxable corporate profits are equal to a corporation’s receipts less allowable deductions—including the cost of goods sold, wages and other employee compensation, interest, most other taxes, depreciation, and advertising. US-based corporations owned by foreign multinational companies generally face the same US corporate tax rules on their profits from US business activities as US-owned corporations.

The corporate income tax is the third-largest source of federal revenue, although substantially smaller than the individual income tax and payroll taxes. It raised $230.2 billion in fiscal year 2019, 6.6 percent of all federal revenue and 1.1 percent of gross domestic product (GDP). The relative importance of the corporate tax as a source of revenue declined sharply from the 1950s to the mid-1980s. Since that time, it has averaged less than two percent of GDP (figure 1). 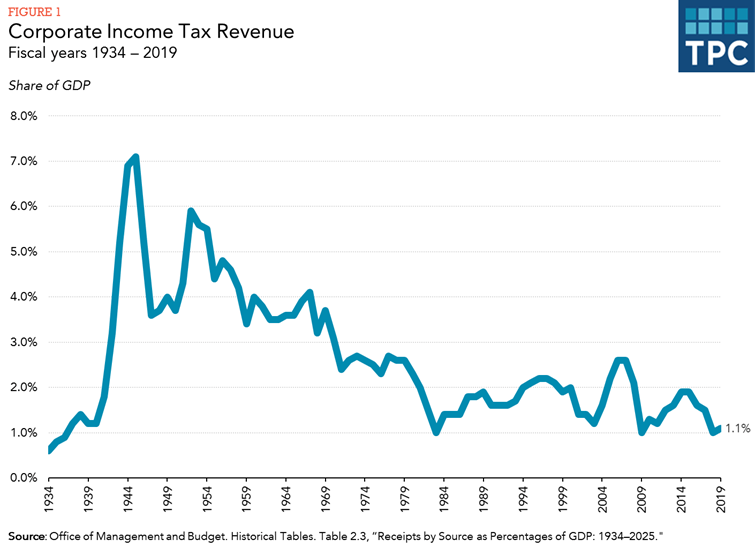 The Tax Cuts and Jobs Act (TCJA) reduced the top corporate income tax rate from 35 percent to 21 percent and eliminated the graduated corporate rate schedule and the corporate alternative minimum tax. Through 2022, the TCJA allows full expensing of most new investment, after which that benefit is phased out through 2026. The TCJA also limited net interest expense deductions to 30 percent of adjusted taxable income.

The TCJA made fundamental changes to the treatment of multinational corporations and their foreign-source income. Prior to the TCJA, dividends distributed by foreign subsidiaries to their US parent corporations were subject to US tax with a credit for foreign income taxes paid—a so-called “worldwide” system.  Now, a ten percent return on certain qualified business asset investment is exempt from further U.S. tax—a so-called “territorial” system. However, the reduced-rate Global Intangible Low-Taxed Income (GILTI) minimum tax applies to returns above that amount regardless of whether they are repatriated as dividends. The TCJA also created a new domestic minimum tax, the Base Erosion and Anti-abuse tax (BEAT), designed to prevent cross-border profit shifting. A deduction for certain foreign-derived intangible income (FDII) serves as an incentive for corporations to locate intellectual property in the U.S.

Many US businesses are not subject to the corporate income tax but are taxed as “pass-through” entities. Pass-through businesses do not face an entity-level tax. But their owners must include their allocated share of the businesses’ profits in their taxable income under the individual income tax. Pass-through entities include sole proprietorships, partnerships, limited liability companies (LLCs) and S-corporations.