How did the Tax Cuts and Jobs Act change personal taxes?

Recent History of the Tax Code

How did the Tax Cuts and Jobs Act change personal taxes?

The Tax Cuts and Jobs Act made significant changes to individual income taxes and the estate tax. Almost all these provisions expire after 2025, while most business provisions are permanent.

The new tax law made substantial changes to the tax rates and the tax base for the individual income tax. The major provisions follow, excluding those that only affect business income.

The Tax Cuts and Jobs Act (TCJA) reduced statutory tax rates at almost all levels of taxable income and shifted the thresholds for several income tax brackets (table 1). As under prior law, the tax brackets are indexed for inflation but using a different inflation index (see below). 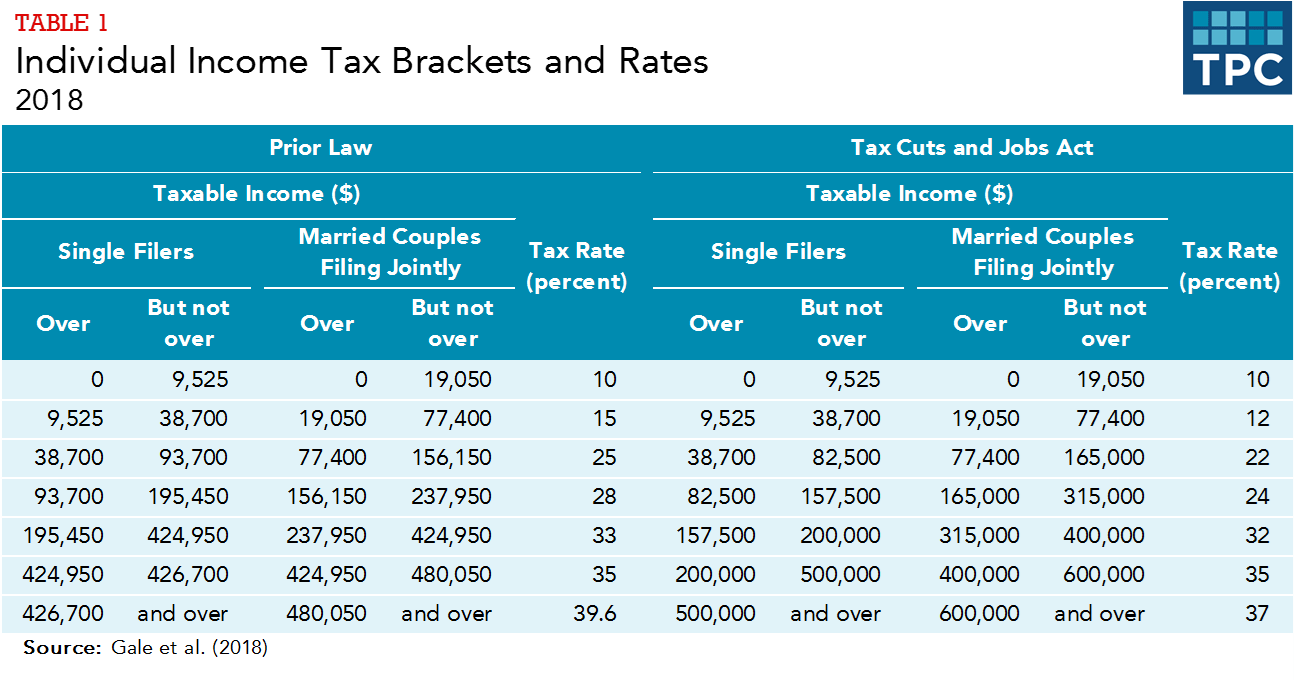 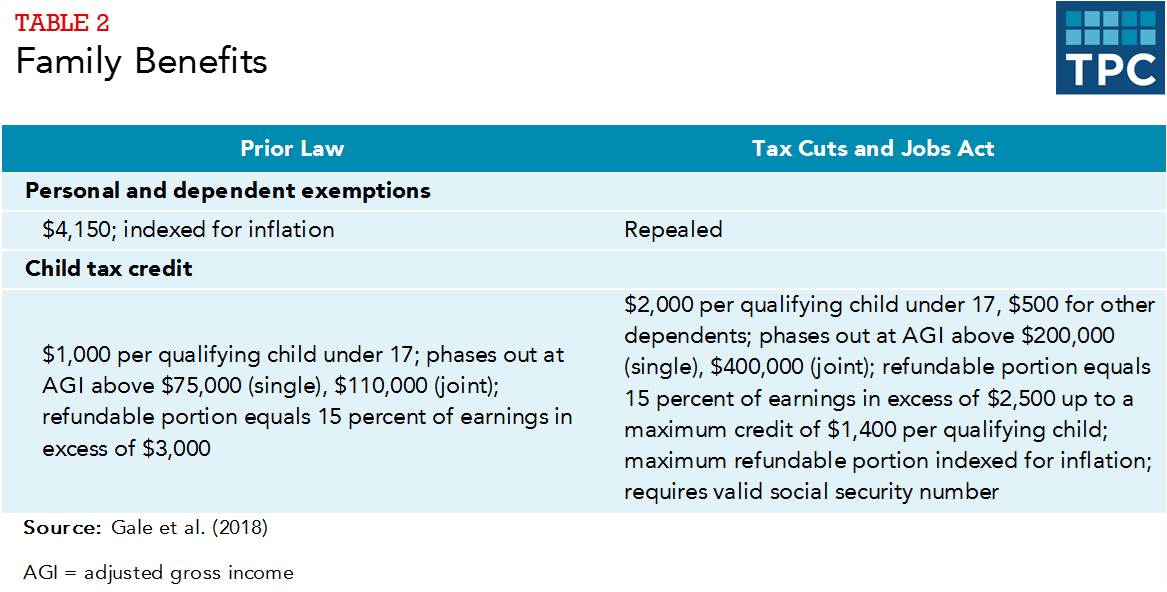 TCJA extended the CTC to higher-income families by substantially increasing the income thresholds at which the credit phases out. As under prior law, the income phaseout thresholds are not indexed for inflation.

TCJA created a new nonrefundable $500 credit for other dependents, including children who are too old to be eligible for the CTC, full-time college students, other adult members of the household for whom the taxpayer provides significant financial support, and children who would otherwise be eligible for the $2,000 child tax credit but lack a valid social security number. The $500 amount is also not indexed for inflation.

Under prior law, taxpayers could deduct interest on mortgage payments associated with the first $1 million of principal paid on debt incurred to purchase (or substantially renovate) a primary and secondary residence plus the first $100,000 in home equity debt. For taxpayers taking new mortgages after the effective date, TCJA limited the deductibility to the interest on the first $750,000 of loan principal and eliminated the deductibility of interest for home equity debt.

TCJA repealed the phase-down of the amount of allowable itemized deductions (sometimes called the Pease provision). This limitation took effect at AGI above $266,700 for single filers and $320,000 for taxpayers filing joint returns. 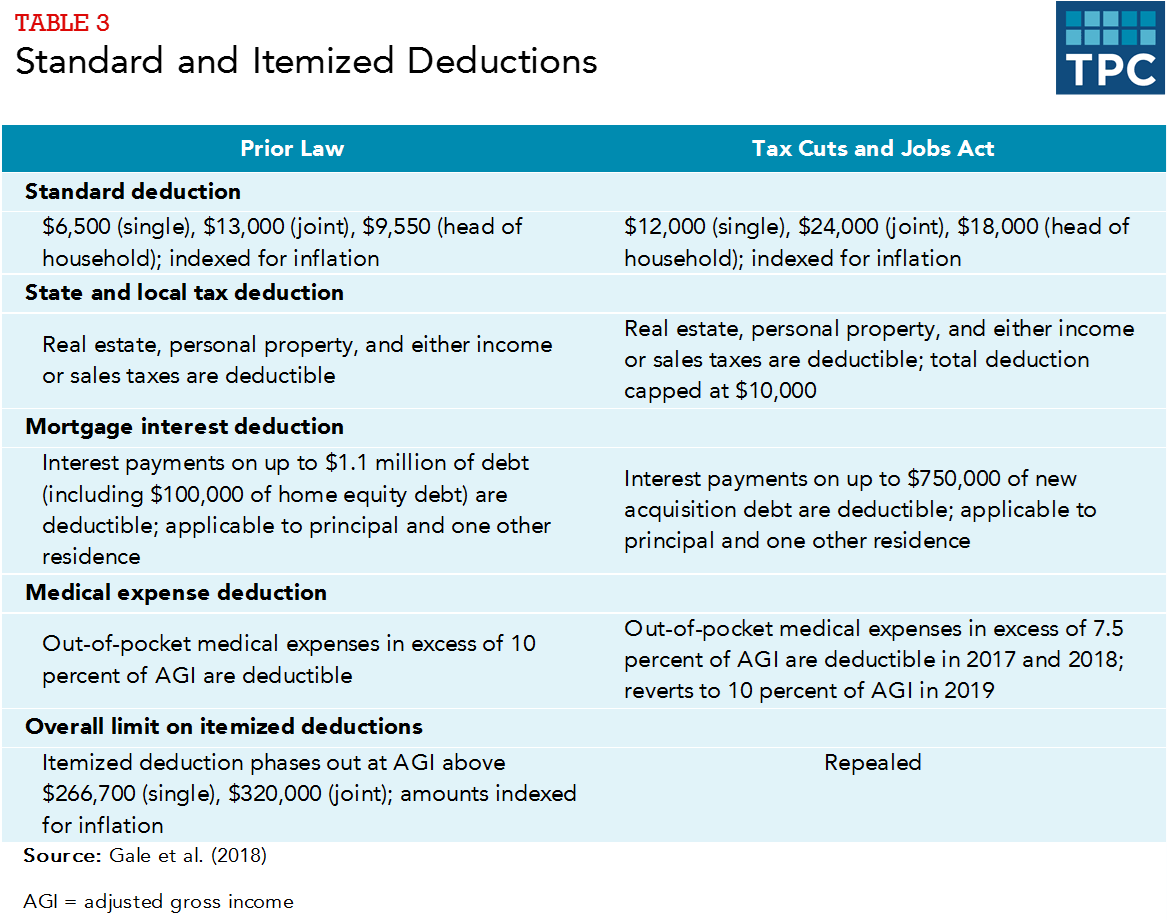 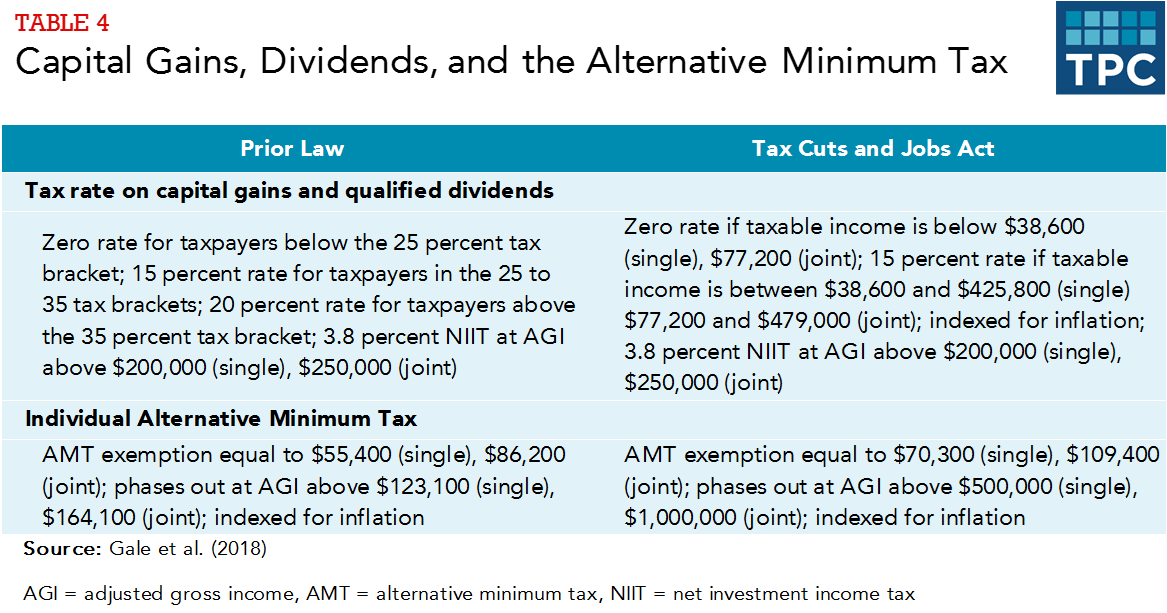 TCJA retained the individual AMT but raised the exemption levels and raised the income threshold at which the AMT exemption phases out, which will significantly reduce the number of taxpayers subject to the AMT. The exemption amounts and phaseout thresholds continue to be indexed for inflation.

TCJA doubled the estate tax exemption to $11.2 million for single filers and to $22.4 million for couples, and continued to index the exemption levels for inflation (table 5). The top estate tax rate remains at 40 percent.

Starting in 2019, TCJA set the Affordable Care Act’s (ACA’s) individual mandate penalty tax to zero. Previously, households without qualifying health insurance were required to pay a penalty equal to the lesser of 2.5 percent of household income or $695 per adult and $347.50 per child, up to a maximum of $2,085. Under the new law, individuals who do not enroll in adequate health insurance plans will not face a penalty starting in 2019. Because fewer people will obtain free or subsidized coverage in the absence of the penalty tax, and the reduced costs of ACA premium tax credits and other subsidies and Medicaid benefits will far exceed the lost revenue from setting the penalty tax rate to zero, the net effect will be to reduce the federal budget deficit. This provision does not sunset.

TCJA changed the measure used for inflation indexing, from the Consumer Price Index for All Urban Consumers (CPI-U) to the chained CPI-U. The chained CPI-U more accurately measures changes in consumer welfare resulting from price changes because it accounts for people finding substitutes for goods whose prices increase faster than others. The chained CPI-U thus generally increases at a slower rate than the traditional CPI-U, implying that individuals will end up in higher tax brackets and that indexed tax credits (like the earned income tax credit) will increase at slower rates than they would have under the old indexing system. The change in indexing is permanent.

A notable feature of the individual tax and the estate tax provisions is that all of them expire after 2025, except the reduction of the ACA penalty tax, the change in inflation indexing, and several changes in the tax base for business income. Some provisions expire sooner (for example the increased deductibility of medical expenses applies only to tax years 2017 and 2018). In contrast, many of the business tax provisions do not sunset. Congress chose to make the individual provisions temporary to limit the revenue cost of the TCJA to a level consistent with the overall constraint on the 10-year revenue loss in the Congressional Budget Resolution and to comply with Senate budget rules under the process used to pass the tax act that require no increase in the federal budget deficit after the tenth year.

Congressional Budget Office, “Cost Estimate for the Conference Agreement on H.R. 1, a Bill to Provide for Reconciliation Pursuant to Titles II and V of the Concurrent Resolution on the Budget for Fiscal Year 2018,” memo, December 15, 2017.

Joint Committee on Taxation. 2017. “Estimated Budget Effects of the Conference Agreement for H.R. 1, The ‘Tax Cuts and Jobs Act.” JCX-67-17.