How are capital gains taxed?

How are capital gains taxed?

Capital gains are profits from the sale of a capital asset, such as shares of stock, a business, a parcel of land, or a work of art. Capital gains are generally included in taxable income, but in most cases, are taxed at a lower rate.

A capital gain is realized when a capital asset is sold or exchanged at a price higher than its basis. Basis is an asset’s purchase price, plus commissions and the cost of improvements less depreciation. A capital loss occurs when an asset is sold for less than its basis. Gains and losses (like other forms of capital income and expense) are not adjusted for inflation.

Capital gains and losses are classified as long term if the asset was held for more than one year, and short term if held for a year or less. Short-term capital gains are taxed as ordinary income at rates up to 37 percent; long-term gains are taxed at lower rates, up to 20 percent. Taxpayers with modified adjusted gross income above certain amounts are subject to an additional 3.8 percent net investment income tax (NIIT) on long- and short-term capital gains.

There are special rules for certain types of capital gains. Gains on art and collectibles are taxed at ordinary income tax rates up to a maximum rate of 28 percent. Up to $250,000 ($500,000 for married couples) of capital gains from the sale of principal residences is tax-free if taxpayers meet certain conditions including having lived in the house for at least 2 of the previous 5 years. Up to the greater of $10 million of capital gains or 10 times the basis on stock held for more than five years in a qualified domestic C corporation with gross assets under $50 million on the date of the stock’s issuance are excluded from taxation. Also excluded from taxation are capital gains from investments held for at least 10 years in designated Opportunity Funds. Gains on Opportunity Fund investments held between 5 and 10 years are eligible for a partial exclusion.

Capital losses may be used to offset capital gains, along with up to $3,000 of other taxable income. The unused portion of a capital loss may be carried over to future years.

The tax basis for an asset received as a gift equals the donor’s basis. However, the basis of an inherited asset is “stepped up” to the value of the asset on the date of the donor’s death. The step-up provision effectively exempts from income tax any gains on assets held until death.

C corporations pay the regular corporation tax rates on the full amount of their capital gains and may use capital losses only to offset capital gains, not other kinds of income. 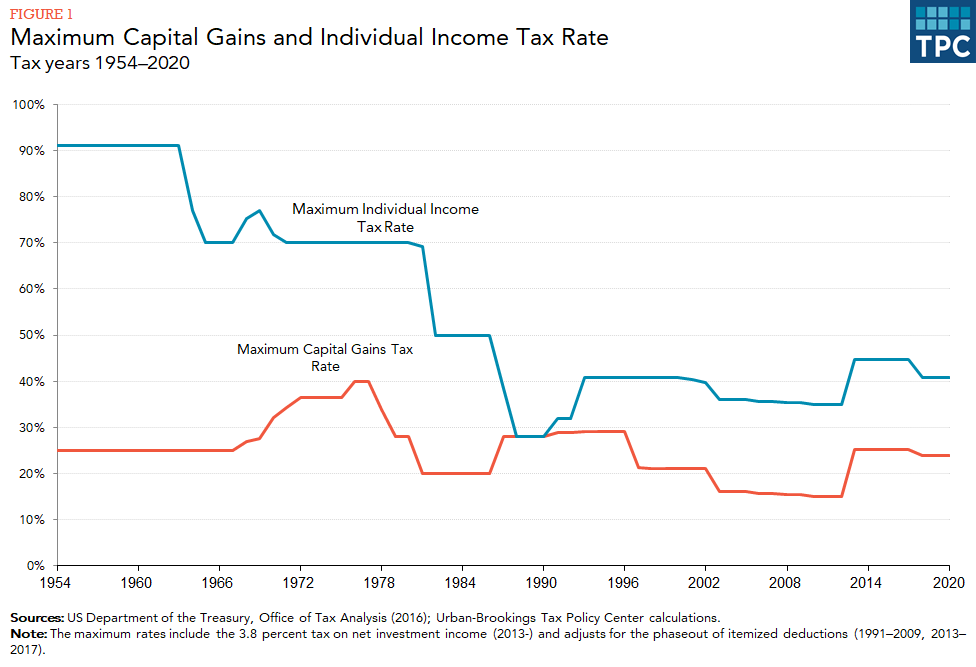