What are state rainy day funds, and how do they work?

What are state rainy day funds, and how do they work?

Rainy day funds, also known as budget stabilization funds, allow states to set aside surplus revenue for use during unexpected deficits. Every state has some type of rainy day fund, though deposit and withdrawal rules vary considerably. 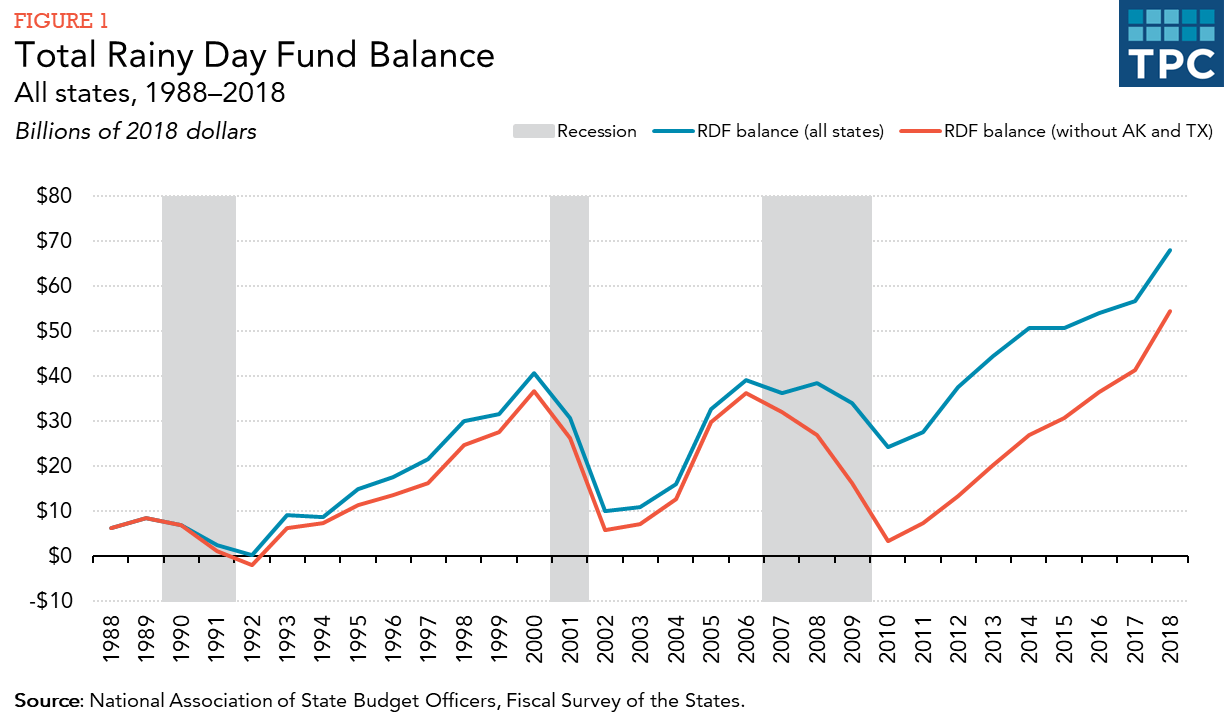 States finance their reserve funds differently (table 1). Most allow some or all their year-end surplus to flow to the rainy day fund (RDF). Other states require a flat contribution out of total or special revenue sources. California, for example, dedicates a portion of its capital gains tax revenue to its budget stabilization account. Similarly, natural resource–rich states like Texas and Louisiana dedicate a portion of oil extraction revenues to various reserve funds, in combination with other deposit mechanisms.

A handful of states tie their reserve accounts to either revenue or economic growth. Indiana, for example, ties its deposits to personal income. Arizona also ties its deposits to a personal income growth formula, but the legislature must authorize the transfer and in practice rarely adheres to the recommended formula. Other states require specified set-asides until the fund reaches its minimum required balance. A few states replenish their funds with discretionary appropriations as part of the budget process, but regular contributions are not automatic or required in these states. Except for the few states (such as Colorado) required to remit surplus revenues to voters, most states can also carry additional general fund surpluses into the following fiscal year once any RDF funding requirements are met. 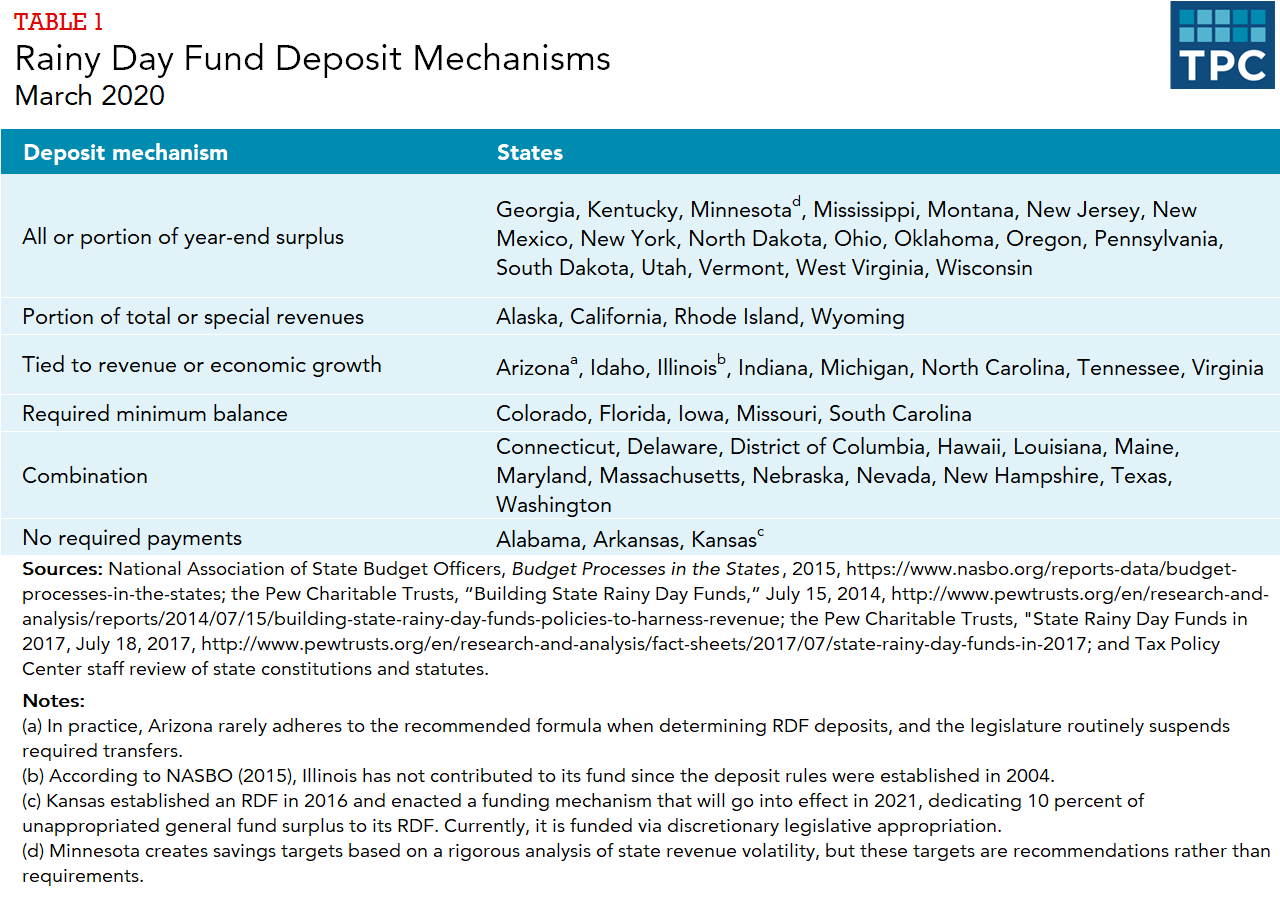 In most states, the RDF is dedicated to closing deficit gaps in the current year or maintaining government spending when revenues are projected to decline. However, withdrawal rules vary. Some states include transfers from the rainy day fund to the general fund in normal appropriations bills, while others require an emergency declaration or a supermajority (e.g., three-fifths or two-thirds) of the legislature to make a transfer. Several states can use the RDF to cover short-term cash flow gaps. Money is transferred to the general fund and must be paid back by the end of the fiscal year.

In addition to an RDF that can be used for general purposes during a fiscal crisis, some states have reserve funds available only for specific uses. For example, 37 states and the District of Columbia (DC) have a reserve account dedicated to disaster recovery. Other states have separate reserve funds for education or Medicaid spending, designed to cover shortfalls in these vital programs. Deposit and withdrawal rules for these supplemental reserve accounts may vary considerably from the rules governing the state’s primary RDF.

Forty-one states and DC cap the balances of their funds. The cap is typically a percentage of either revenues or expenditures, although some states have more complex formulas for determining maximum fund size. Most states that finance their RDF with operating surpluses stop transfers once the cap has been reached, allowing the surplus to remain in the general fund. A few redirect those operating surpluses to other funds for special projects or taxpayer relief. Maine, for example, after transferring the required fixed amounts to several other reserve funds, directs 80 percent of the remaining surplus to its budget stabilization fund and the remaining 20 percent to its tax relief fund for residents. If the RDF is at its cap, excess surplus flows to the tax relief fund.

An economic downturn can cause significant fiscal stress for states because, without changes in policy, revenues decline even as demands on programs such as unemployment insurance and Medicaid increase. Savings in rainy day funds help states weather a fiscal downturn with fewer expenditure cuts. The median balance of state RDFs declined significantly after each of the last three recessions, but states have gradually built them back up each time (figures 1 and 2). 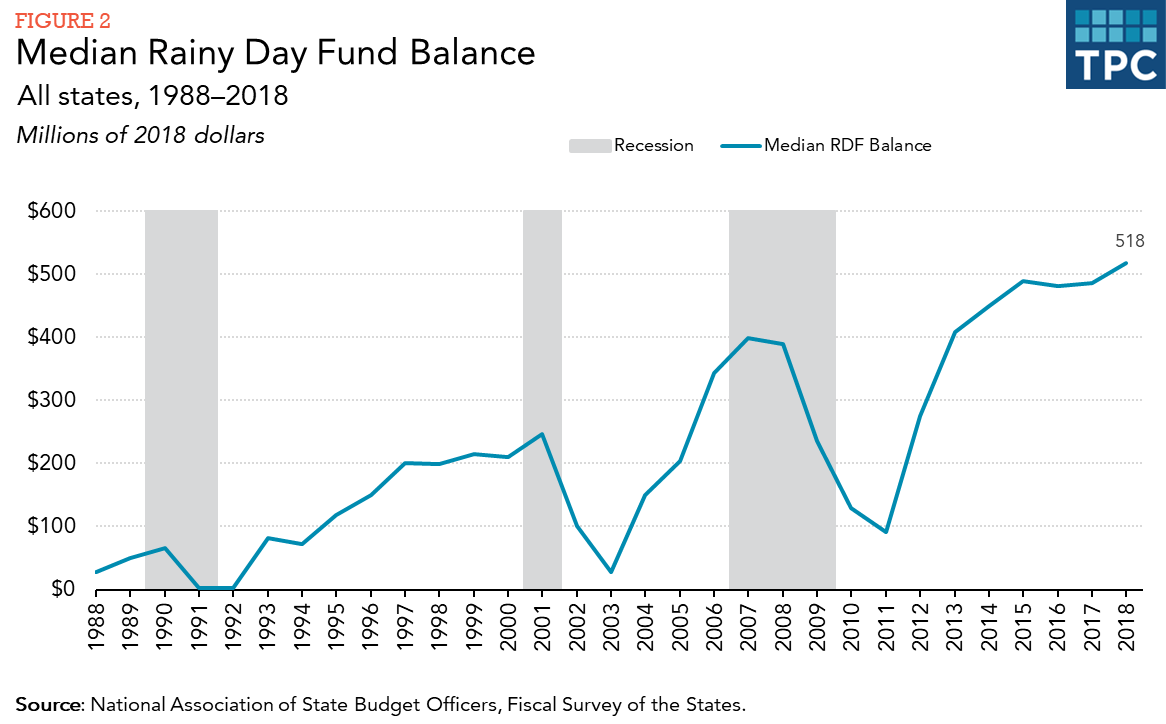 Capping the amount in the RDF is a sensible approach to preventing the unnecessary build-up of restricted funds, but the cap must be set appropriately. Before the Great Recession, a typical rule of thumb was to maintain at least 5 percent of total expenditures or revenues in reserves. States that cap out at 5 percent or less, therefore, may find reserves inadequate to close fiscal gaps. Currently, 9 of the 41 states with caps, as well as DC, specify caps of 5 percent or less.

Many states have reconsidered the 5 percent rule since the Great Recession, as even states with robust prerecession RDFs exhausted much of their reserves. The Government Finance Officers Association now recommends states set aside at minimum two months of operating expenditures (i.e., roughly 16 percent of total general fund spending). Only five states had RDF balances at or above 16 percent at the end of 2018, all of which except California were natural resource–rich states (i.e., Alaska, Texas, West Virginia, and Wyoming). In another approach, also recommended by the Government Finance Officers Association and others, some states have begun to tie and tailor their caps and deposit mechanisms to their own revenue volatility.

RDFs are an important tool for states to avoid sharp cuts in spending or tax increases when they are hurting economically. It is generally recommended that states mitigate fiscal and economic volatility by pairing strong balanced budget requirements with robust RDFs. Moreover, states should design their RDF deposit mechanisms and caps with an understanding of their revenue volatility.

McNichol, Elizabeth. 2014. “When and How Should States Strengthen Their Rainy Day Funds?” Washington, DC: Center on Budget and Policy Priorities.

Randall, Megan. 2017. “How Much Rainier Does It Need to Get for Texas to Use Its Rainy Day Fund?” Urban Wire (blog). October 5.