What are dynamic scoring and dynamic analysis?

What are dynamic scoring and dynamic analysis?

The Congressional Budget Office (CBO) and the Joint Committee on Taxation (JCT) estimate the budgetary effects of tax, spending, and regulatory legislation. The resulting “scores” play a major role in policy deliberations because of congressional budget rules and public concern about the budget.

CBO and JCT recognize that households’ and businesses’ economic activity can be sensitive to changes in policy. An increase in the cigarette tax, for example, will reduce smoking, while new subsidies for health insurance will increase coverage. The agencies account for those behavioral responses in their estimates.

For many years, however, CBO and JCT budget scores did not account for the secondary impact on employment, gross domestic product, and other macroeconomic measures. The agencies often analyzed those macroeconomic impacts separately in what is called dynamic analysis, but did not include their feedback effects in official scores. An exception is immigration reform scoring: the effects on population and labor force are so direct that CBO and JCT did account for them.

In 2015, Congress adopted new budget rules that required dynamic scoring in certain cases. CBO and JCT now include macroeconomic feedback in official scores if proposed legislation has a sufficiently large budget impact (more than 0.25 percent of gross domestic product in any year in the budget window, equivalent to about $54 billion in 2019) or if a budget committee chair requests it. These rules cover major tax and mandatory spending proposals; an unresolved question is how these rules might also apply to investments, like infrastructure and education, funded through discretionary spending.

For dynamic scoring, CBO and JCT prepare conventional, nondynamic scores of proposed legislation and then use economic models to identify any short- or long-run effects on the overall economy. The agencies then estimate the budget effects of those macroeconomic feedbacks. The agencies have long done dynamic analyses of major legislation, using multiple models and parameter estimates. A major difference with dynamic scoring is that it distills multiple estimates down to the single set of estimates the budget process requires.

As mandated by the new budgetary rules, JCT analyzed the potential budget effects of the Tax Cuts and Jobs Act (TCJA). Including macroeconomic feedback, they estimated that the legislation would increase cumulative deficits by $1.1 trillion over the next decade. With conventional scoring, the estimated deficit increase would have been larger, $1.5 trillion (figure 1). 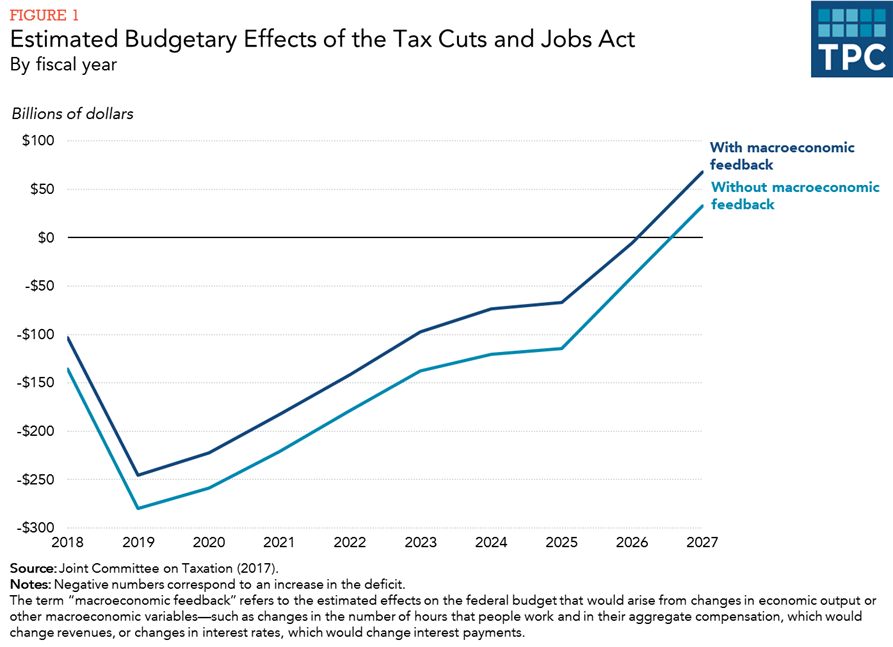 That difference arises because the agency’s best estimates—subject, they emphasize, to significant uncertainty—suggest that the TCJA will expand economic activity. In the short run the law gives people more after-tax income, which increases demand for goods and services, boosting the economy. In the longer run, lower marginal tax rates on returns to saving and investment incentives will push up saving, investment, and the capital stock. Until many provisions expire after 2025, TCJA also lowers marginal tax rates on labor income, encouraging people to work more. JCT estimated that TCJA would boost the level of output by 0.7 percent, on average, over 2018–27. The larger output means more taxable income, generating additional revenue over the period—an effect slightly offset by higher interest rates, which raise projected interest payments on the national debt.

Beginning in 2016, the Urban-Brookings Tax Policy Center has been publishing dynamic analyses of the tax plans of both presidential candidates and Congress. Those analyses generally found only modest dynamic effects on estimated revenue, largely because any incentive effects of lower tax rates were offset by increases in budget deficits. Most recently, the Tax Policy Center analyzed the dynamic effects of the TCJA, finding an initial boost to the economy that dwindled over time due to expiring provisions and rising debt.

In principle, dynamic scoring should not be controversial. Policymakers and the public want to know how policy changes may affect the budget, whether through direct behavioral responses or macroeconomic feedback. In practice, however, dynamic scoring has been controversial: Advocates for a policy often hope that dynamic scoring will make enacting it easier. Opponents, however, fear the advocates will be right.

In reality, the effect will be more muted. Dynamic scores for tax cuts will include the pro-growth incentive effects that advocates emphasize. But dynamic scores will also account for offsetting effects, such as higher deficits crowding out investment or people working less because their incomes rise. The net of incentive and offsetting effects often yields smaller growth projections than advocates hope. Indeed, dynamic scoring sometimes shows that tax cuts are more expensive than conventionally estimated, usually when pro-growth incentives are not big enough to offset anti-growth effects.