How did the TCJA change the standard deduction and itemized deductions?

How did the TCJA change the standard deduction and itemized deductions?

As before, the amounts are indexed annually for inflation. The standard deduction amount in 2020 is $12,400 for single filers, $24,800 for married couples, and $18,650 for heads of household. The TCJA changed the measure used for inflation indexing from the consumer price index for all urban consumers (CPI-U) to the chained CPI-U—a more accurate measure but one that results in a smaller upward adjustment each year.

The TCJA eliminated or restricted many itemized deductions in 2018 through 2025. This, together with a higher standard deduction, will reduce the number of taxpayers who itemize deductions. TPC estimates that in 2018 the share of all households that itemize shrank to 10 percent because of the tax overhaul.

State and local taxes (SALT). Taxpayers can still deduct state and local real estate, personal property, and either income or sales taxes in tax years after 2017, but the TCJA capped the total SALT deduction at $10,000 for tax years 2018 through 2025.

Mortgage interest. The TCJA limited the deduction to the home mortgage interest on the first $750,000 of mortgage debt (reduced from the pre-TCJA limit of $1 million of mortgage debt) for mortgage loans taken out after December 15, 2017. Homeowners may no longer deduct interest paid on home equity loans, which was allowed for loans up to $100,000 before the TCJA, unless the debt is used to buy, build, or substantially improve the taxpayer’s home that secures the loan. Homeowners may still deduct mortgage interest on their primary residence and a second home.

THE EFFECT OF TCJA ON MAJOR ITEMIZED DEDUCTIONS

TCJA significantly decreased the number of taxpayers claiming itemized deductions and the average tax saving from claiming them. The following figures compare the estimated percentage of taxpayers with a tax benefit from the three major itemized deductions—state and local taxes, mortgage interest, and charitable contributions—and the tax saving from claiming them in 2017 and 2018, before and after the new law is in place. The tax benefit is measured as the reduction in tax liability from the deduction, accounting for the applicable tax rates in each year, the effects of the alternative minimum tax (which disallows the SALT deduction), and the overall limit on itemized deductions (the “Pease” limit) that was in place in 2017 but eliminated for future years by TCJA. 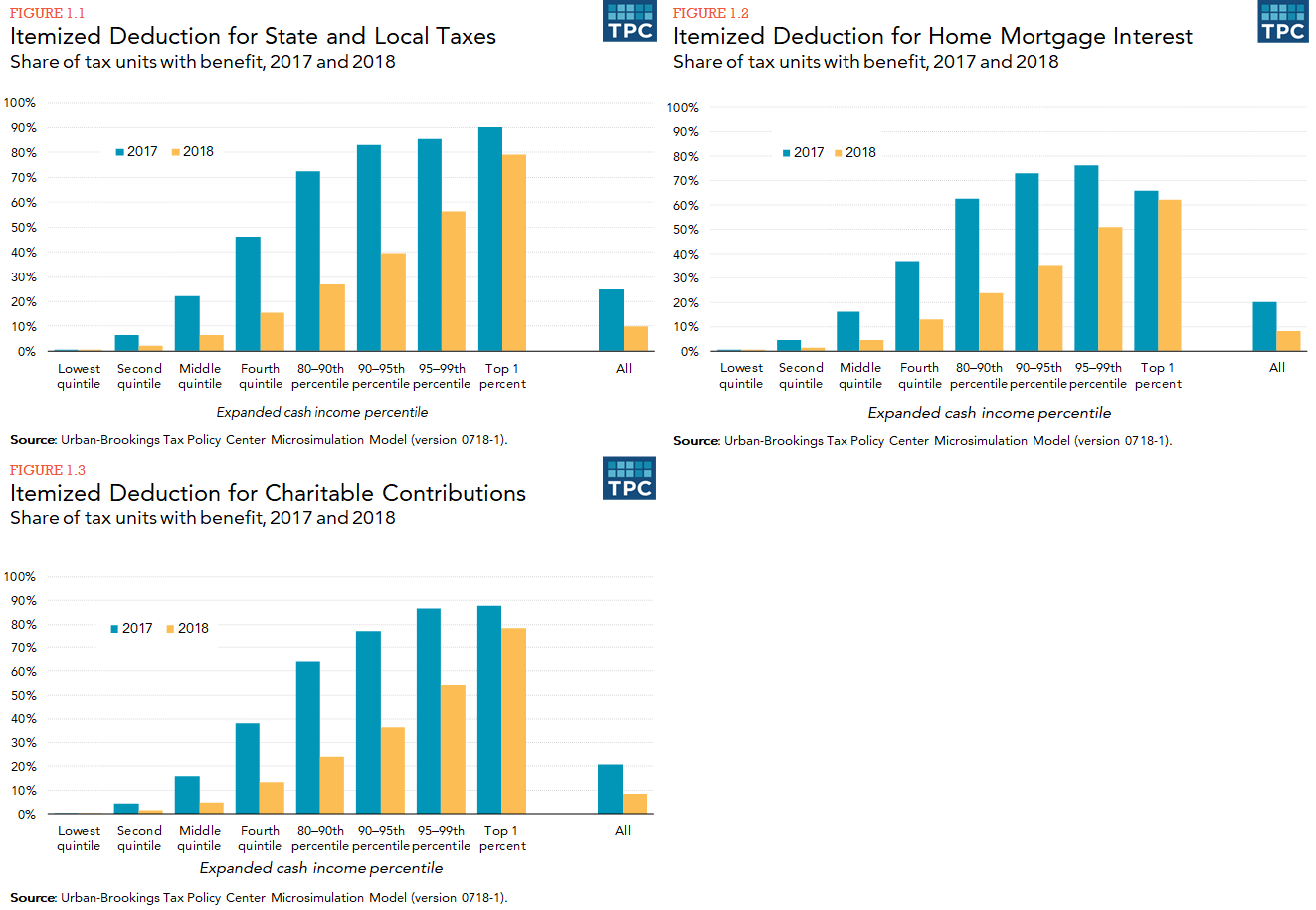 The decline in the tax benefit from the deductions is even more dramatic. Measured as a percentage of after-tax income, the tax saving from the SALT deduction in 2018 was about one-quarter of what it was in 2017 overall. For taxpayers in the top 1 percent of the income distribution, the tax saving in 2018 was about one-tenth of the tax saving in 2017 (figure 2). The distribution of the tax benefits from the SALT, mortgage interest, and charitable deductions in 2019 are similar to those in 2018. 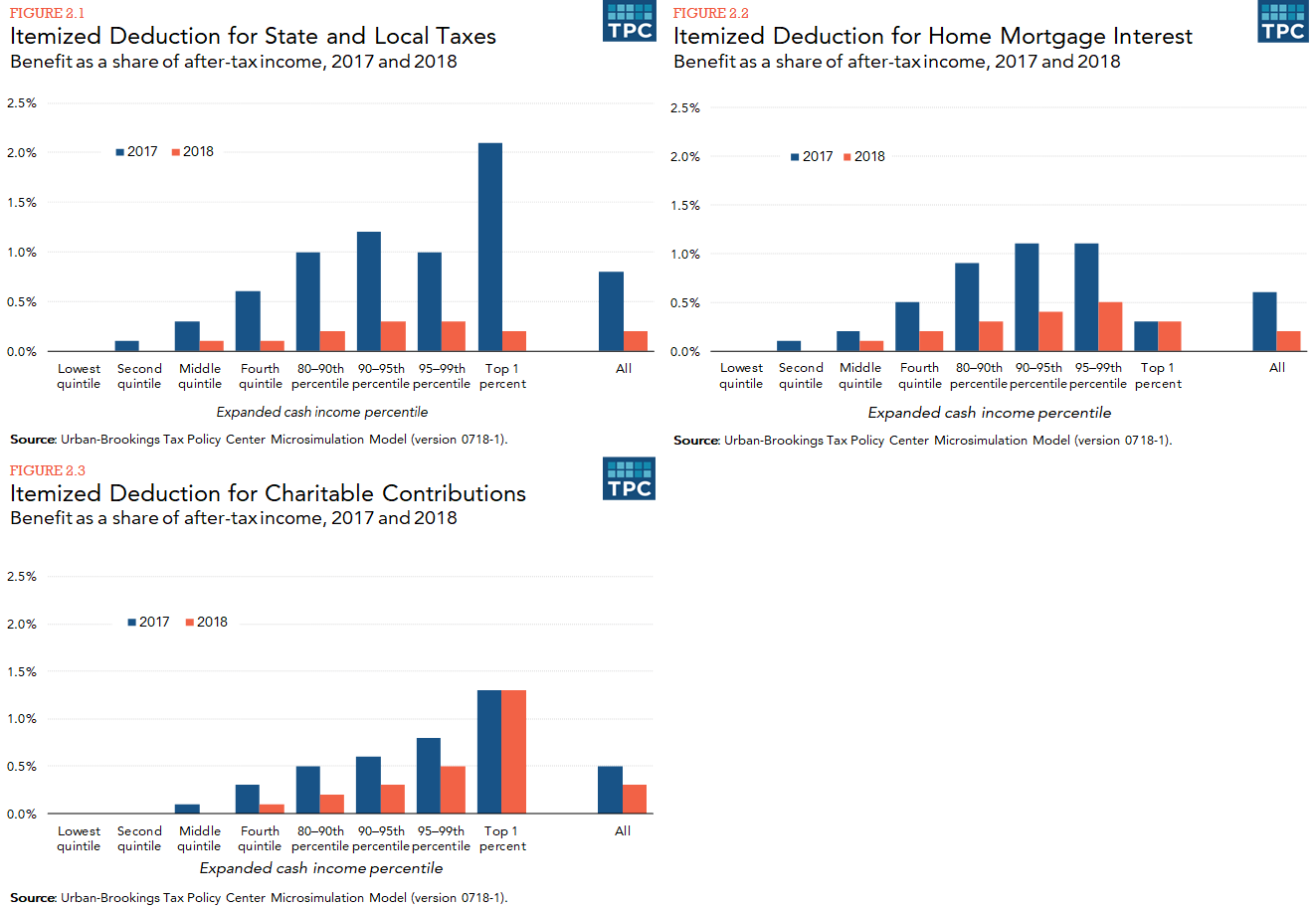