How did the TCJA affect tax expenditures?

How did the TCJA affect tax expenditures?

The tax expenditures that the TCJA reduced the most in fiscal years 2018–20 were the deduction of nonbusiness state and local income and property taxes, replacement of deferral by a reduced tax rate on the active income of controlled foreign corporations, deductions for mortgage interest on owner-occupied residences, subsidies for insurance purchased through health benefit exchanges, expensing of business depreciable property for small businesses under section 179, and the deduction for income attributable to domestic production activities (table 1).

The existing tax expenditures that the TCJA increased the most were the credit for children and other dependents and depreciation of equipment in excess of the alternative depreciation system. The largest new tax expenditure enacted in the TCJA was a 20 percent deduction for qualified business income (table 1). 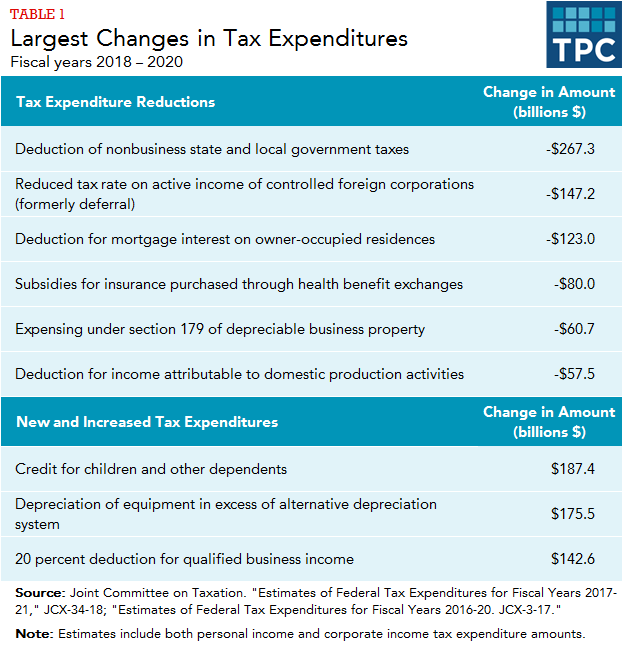 Most of the tax expenditures that the TCJA eliminated were small. The principal exception was the deduction attributable to domestic production activities ($58 billion in 2018–20), which was 9 percent of taxable business income. (For large corporations, the deduction was equivalent to a cut in the tax rate on profits from domestic production from 35 to 31.9 percent.) With the lower corporate tax rate from the TCJA, Congress believed this deduction was no longer needed to reduce the tax burden on domestic manufacturing.

The TCJA raised much more revenue from reducing several large tax expenditures instead of eliminating them. It reduced the value of the nonbusiness state and local income, sales, and property tax deductions in fiscal years 2018–20 to less than one-quarter its former cost. This resulted from a combination of changes: a $10,000 cap on the amount of taxes taxpayers could claim as a deduction; an increase in the standard deduction and reductions in other itemized deductions, which reduced the number of taxpayers claiming the deduction; and modestly lower individual income tax rates, which reduced the tax saving for taxpayers who claim it.

International provisions in the TCJA also reduced tax expenditures. The replacement of deferral of the profits of controlled foreign corporations until repatriation with a reduced tax rate on intangible profits accrued in low-tax countries reduced estimated tax expenditures in 2018–20 by $147 billion. JCT previously scored deferral as costing $365 billion over the three-year period, while the estimated revenue loss from the reduced tax rate on accrued profits (10.5 percent instead of 21 percent) was $218 billion. More than 100 percent of the reduction is this tax expenditures was, however, attributable to reduction in the corporate rate from 35 to 21 percent instead of the reform of international provisions.

The largest expansions were for the child credit and depreciation of equipment by businesses. The child tax credit was doubled from $1,000 to $2,000 per child. TCJA introduced a new $500 credit for dependents and other children receiving the regular child tax credit, it increased the income levels at which the credit phases out, and it increased the amount of the credit that could be refunded. These changes raised the estimated 2018–20 revenue loss from the child credit by $187 billion.

Indirect effects on the costs of tax expenditures

Lower marginal tax rates reduce the cost of tax expenditures that take the form of exclusions and deductions, because reducing taxable income provides smaller tax benefits at lower rates. TCJA modestly reduced the value of many individual tax expenditures by reducing the individual rate schedule from rates ranging from 10 to 39.6 percent to rates ranging from 10 to 37 percent.

The decline in the top corporate tax rate from 35 to 21 percent was much larger than the cut in the marginal individual rates. Most corporate tax expenditures are small, however, so the corporate rate cut per se did not change their total cost very much. Changes in what were the two of the three largest corporate tax expenditures before the TCJA (depreciation in excess of the alternative depreciation system and the domestic manufacturing deduction) were largely or wholly the result of other changes in the legislation (expensing of investment in equipment, and elimination of the domestic manufacturing deduction), while more than 100 percent of the reduction in tax expenditures for foreign-source income was a result of the lower corporate tax rate.

For example, the cost of the mortgage interest deduction declined from $234 billion to $112 billion. Only a small portion of this decline came from the direct provisions affecting mortgage interest—the reduced ceiling on the size of new mortgages eligible for the deduction from $1 million to $750,000 and elimination of the deduction for up to $100,000 of home equity loans. Most of the estimated saving was instead an indirect effect of the increase in the standard deduction, the $10,000 cap on state and local tax deductions, and lower marginal tax rates. The same indirect effects reduced the estimated cost of charitable deductions (other than for education and health) from $142 billion to $110 billion.

Indirect effects also reduced other tax expenditures. The Congressional Budget Office estimated that the elimination of the penalty tax on individuals without health insurance coverage would reduce the take-up rate for health insurance plans under the Affordable Care Act exchanges. The resulting reduction in coverage would then reduce tax subsidies paid out by the exchanges by about $80 billion between 2018 and 2020. On the business side, the estimated tax expenditure for small business expensing under section 179 declined from about $100 billion to about $40 billion between 2018 and 2020, even though the amount of deductions taken was made more generous. The estimated tax expenditure declined because, with bonus depreciation in place, the additional benefit of allowing expensing under section 179 is much less than it would have been without bonus depreciation.