What tax incentives exist to help families pay for college?

What tax incentives exist to help families pay for college?

Rapidly rising college expenses in the 1990s spurred the 1997 enactment of tax incentives for higher education, which currently include the American opportunity tax credit, the lifetime learning credit, and deductions for tuition and fees and for student loan interest.

The American opportunity tax credit (AOTC) provides a credit up to $2,500 per student during the first four years of undergraduate postsecondary school. Students receive a credit of 100 percent against the first $2,000 of tuition, fees, and books, and a 25 percent credit against the next $2,000. Up to $1,000 of the AOTC is refundable; to qualify for the credit, students must be enrolled at least half time for one or more academic periods during the year. AOTC credits, it should be noted, are not indexed for inflation. The AOTC was enacted as part of the fiscal stimulus package and then made permanent in 2015 under the Protecting Americans from Tax Hikes Act. The AOTC replaced the Hope credit and is available for more years of schooling (four versus two years), covers more expenses, and is partly refundable.

The lifetime learning credit (LLC) equals 20 percent of tuition and fees for any postsecondary education expense, up to a maximum annual credit of $2,000 per taxpayer. That maximum applies to the combined expenses of all students in the household claiming the credit and is reached when total qualifying expenses equal $10,000. The maximum benefit for the LLC phases out for MAGI between $58,000 and $68,000 in 2019 (and between $116,000 and $136,000 for married couples). The phaseout thresholds for the lifetime learning credit are adjusted annually for inflation. The LLC is nonrefundable, so only people who owe income tax can benefit.

The deduction for tuition and fees allows taxpayers (parents, students, or spouses—whoever pays) to reduce taxable incomes by up to $4,000 per return. Single, head of household, or qualifying widower filers with MAGIs between $65,000 and $80,000 or married filers with MAGIs between $130,000 and $160,000 can deduct up to $2,000 of expenses. After that, a family is no longer eligible for the deduction. Because the provision is a deduction, it has value only to students and their families with taxable income. The provision was set to expire at the end of 2016, but Congress extended the tuition and fees deduction through the end of 2020, after which it will not be available unless Congress extends it again.

The student loan interest deduction allows taxpayers with qualified student loans (loans taken out solely to pay qualified higher education expenses) to reduce taxable income by $2,500 or the interest paid during the year, whichever is less. The loan cannot be from a relative or made under a qualified employer plan, and the student must be a taxpayer, a spouse, or a dependent; only those enrolled at least half time in a degree program qualify.

Qualified expenses include tuition and fees; room and board; books, supplies and equipment; and other necessary expenses such as transportation. To qualify in 2019, a taxpayer’s AGI may not exceed $85,000 for single, head of household, or qualifying widower filers, or $170,000 for married filers. After that, a family is no longer eligible for the deduction. The deduction is, of course, only valuable to people with taxable income. The student loan interest deduction will cost an estimated $2.3 billion in 2019.

HOW THESE Tax Incentives AFFECT STUDENTS

Before Congress created the AOTC, many observers argued that existing tax subsidies had minimal impact on college enrollment because those subsidies went mostly to people who would have attended college even without the additional aid. Many low-income students who might have been the most influenced by reduced college costs received little or no benefit from the Hope credit and the LLC because they were nonrefundable and thus could only offset income taxes owed.

In response, the AOTC was made refundable, allowing lower-income families to receive the credit. Even so, students with incomes below $50,000 receive more aid from the Pell grant than from the tax credits. And even with the changes to the tax credits, it remains unclear whether tax credits increase college enrollment (figure 1). 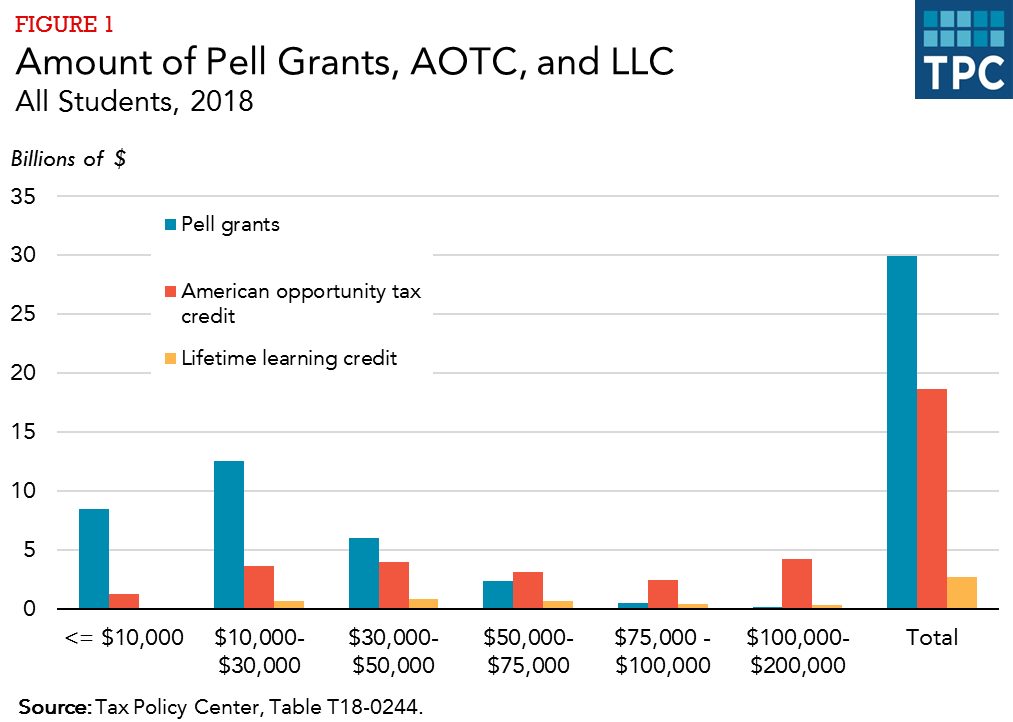 Using the tax system to subsidize higher education has two primary advantages over using traditional spending programs: (1) students don’t have to fill out the daunting Free Application for Federal Student Aid form to receive benefits, and (2) every student who qualifies receives the full benefit for which he or she appears entitled. However, providing aid through the tax system also has disadvantages—notably, the delay in funds being received (up to 15 months after tuition was paid), a lack of transparency about why taxes went down, and potential mismatches in that the person receiving the credit or deduction is often not the student.