How much revenue does the AMT raise?

How much revenue does the AMT raise? 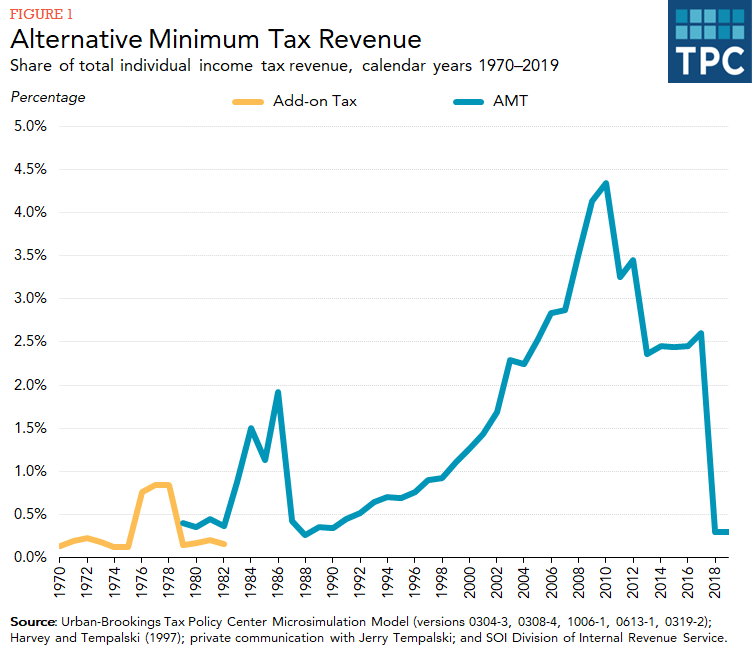 The Tax Reform Act of 1986 (TRA86) changed both the regular income tax and the AMT. The TRA eliminated much tax-sheltering activity and thus shifted much of the AMT base to the regular income tax system. In particular, the TRA86 eliminated the partial exclusion of capital gains, which had accounted for 85 percent of total AMT preferences in 1985. As a result, AMT revenue fell to $1.7 billion in 1987, back to the same 0.4 percent of aggregate individual income tax revenue that it had raised in 1979.

In 2001, Congress passed the Economic Growth and Tax Relief Reconciliation Act, which substantially reduced regular income taxes but provided only temporary relief from the AMT. Over the following decade, Congress repeatedly passed legislation—known as the AMT “patch”—to prevent an explosion in the number of AMT payers. Despite the annual patches, AMT revenue continued to grow, reaching $37.7 billion—or 3.5 percent of individual income tax revenue—in 2012.

The American Taxpayer Relief Act of 2012 (ATRA) enacted an AMT “fix” by establishing a higher AMT exemption, indexing the AMT parameters for inflation, and allowing certain tax credits under the AMT. Combined with the fact that ATRA raised regular income taxes on high-income taxpayers, the permanent AMT fix reduced AMT revenue to $27.1 billion, or 2.4 percent of income tax revenue, in 2013.

The 2017 Tax Cuts and Jobs Act (TCJA), included provisions that greatly reduce the revenue the AMT will generate. For 2018, the TCJA enacted a higher AMT exemption and a large increase in the income level at which the exemption begins to phase out. It also repealed or scaled back some of the largest AMT preference items, further limiting the tax’s scope. As a result, AMT revenue fell from $37.7 billion in 2017 to just $4.5 billion in 2018—a drop from 2.6 percent to 0.3 percent of all individual income tax revenue. 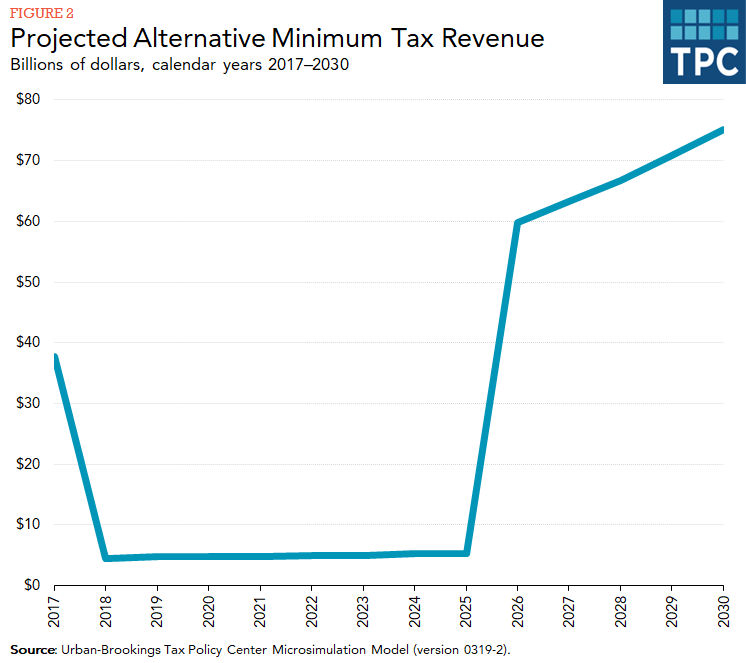 Leiserson, Greg, and Jeff Rohaly. 2007. “What is Responsible for the Growth of the AMT?” Washington DC: Urban Institute.