The federal government provides individuals with financial assistance for higher education expenses in two major ways: traditional student aid (through loans, grants, and work study) and tax benefits. In 2019, over a dozen tax benefits were available for college students and their parents. These include three broad classes—special tax treatment for education savings plans, tax credits for tuition and related expenses, and tax deductions for tuition and fees, as well as student loan payments. The Joint Committee of Taxation estimates these tax benefits will cost the federal government $131.4 billion between 2019 and 2022.

Tax benefits for higher education are frequently oriented toward the middle class rather than the poorest households, who benefit more from traditional student aid (table 1). The largest benefits are tax credits: the American opportunity tax credit (AOTC) and the lifetime learning credit (LLC). Although the AOTC is refundable, both credits largely accrue to middle-class households, as these households typically have larger out-of-pocket expenses for higher education than lower-income households, who receive traditional aid. The Congressional Budget Office estimates that nearly all other tax benefits for higher education similarly benefit middle- and upper-class families. The one exception is a provision allowing college dependents to qualify as children for the refundable earned income tax credit, which primarily benefits taxpayers in the bottom two quintiles.

The Tax Cuts and Jobs Act (TCJA) did not dramatically change tax benefits for higher education savings or loan repayment. It also avoided changes to the AOTC and LLC. However, the legislation did significantly change the structure of tax benefits for those claiming a dependent college student. In prior years, taxpayers could only claim dependents over 18 if the dependent’s gross income was below a modest amount. However, parents could claim full time students ages 19 to 23 without regard to the gross income test. In 2017, taxpayers received an additional $4,050 personal exemption for each 19- to 23-year-old college student claimed as a dependent.

The Tax Cuts and Jobs Act eliminated all personal exemptions but it also expanded the child tax credit to include a $500 nonrefundable credit for dependents not eligible for the regular child tax credit, including 19- to 23-year-old dependent college students. This change transformed the tax savings for claiming a college student dependent from one which depended on the parents’ tax rate to a credit where all taxpayers get an equivalent benefit regardless of their tax rate (up to the limit of their total income tax liability). This shifts more of the value of the benefit from higher-income taxpayers to lower-income taxpayers. However, because the new credit is nonrefundable, it still does not reach the lowest-income taxpayers. 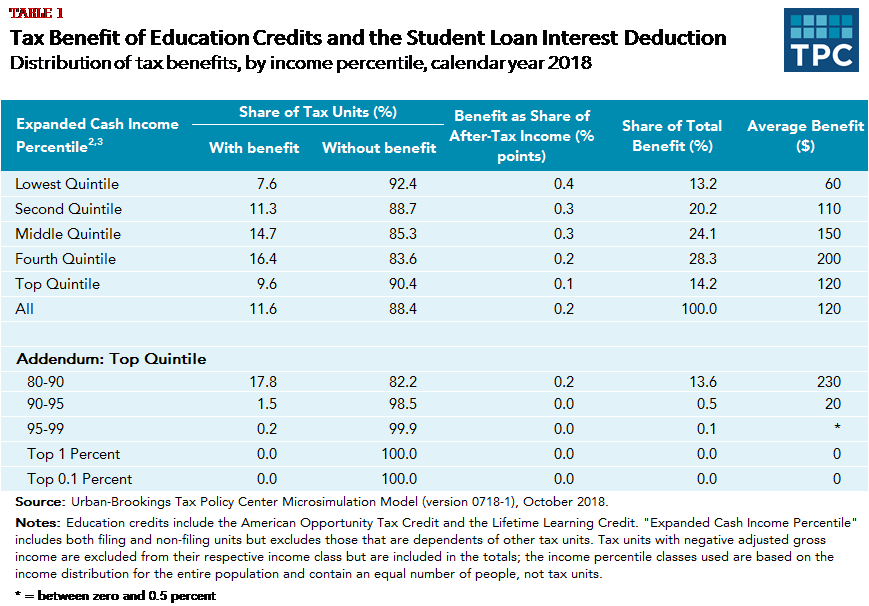 In addition to the benefits discussed above, tax benefits for education include a business deduction for work-related education expenses; an exclusion from taxable income of scholarships, grants, tuition reductions, and employer-provided educational assistance; and penalty-free early withdrawals from individual retirement accounts if the funds are used for educational expenses.