How do state and local individual income taxes work?

How do state and local individual income taxes work?

Forty-one states and the District of Columbia levy broad-based taxes on individual income. New Hampshire and Tennessee tax only individual income from dividends and interest. Seven states do not tax individual income of any kind. Local governments in 13 states levy some type of tax on income in addition to the state income tax.

HOW MUCH REVENUE DO STATE AND LOCAL GOVERNMENTS COLLECT FROM INDIVIDUAL INCOME TAXES?

Forty-one states and the District of Columbia levy a broad-based individual income tax. New Hampshire taxes only interest and dividends, and Tennessee taxes only bond interest and stock dividends. (Tennessee is phasing its tax out and will completely eliminate it in 2021.) Alaska, Florida, Nevada, South Dakota, Texas, Washington, and Wyoming do not have a state individual income tax.

For combined state and local revenue, Maryland relied the most on the individual income tax in 2017, with the tax accounting for 29 percent of its own-source revenue. The District of Columbia and eight other states—California, Connecticut, Kentucky, Massachusetts, Minnesota, New York, Oregon, and Virginia—collected more than 20 percent of their own-source revenue from individual income taxes in 2017. 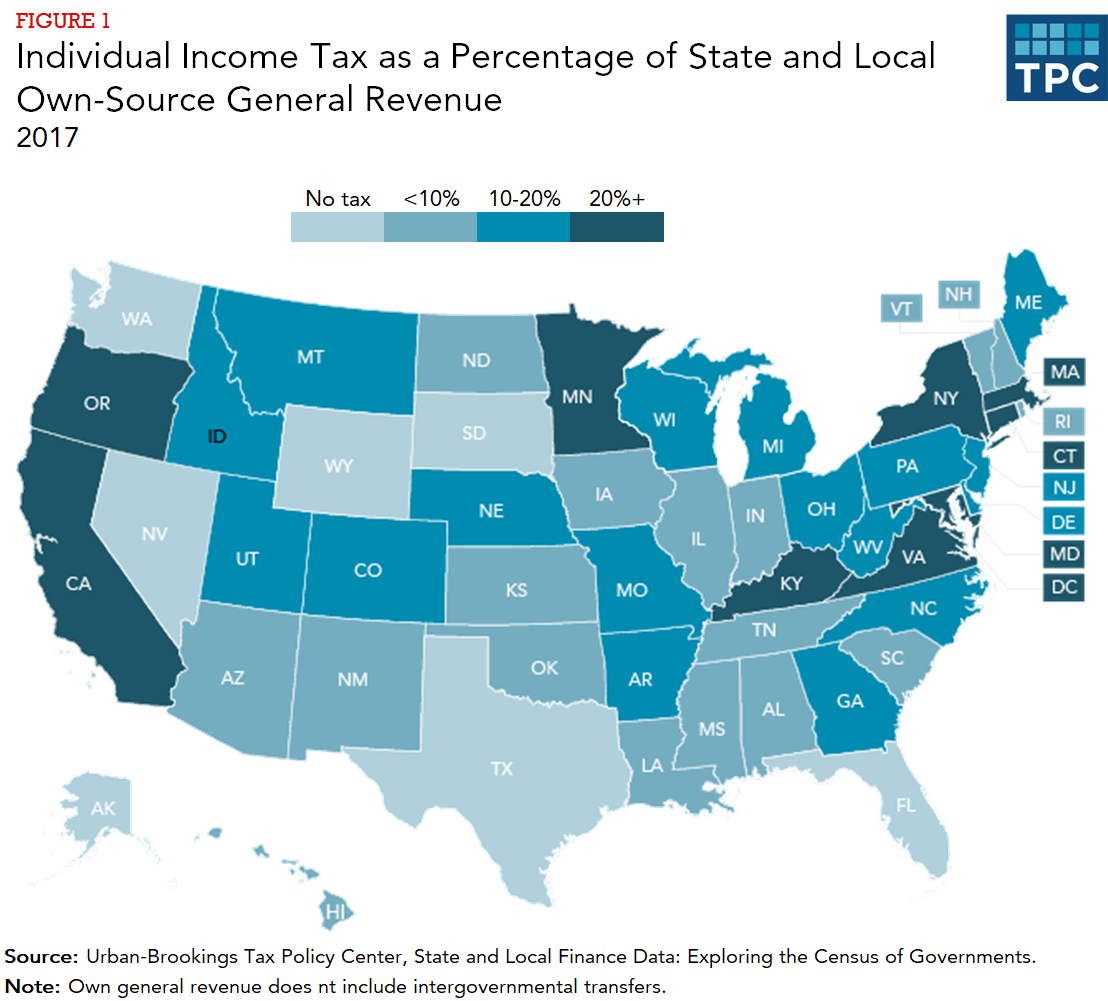 Meanwhile, localities in Alabama, Delaware, Kansas, Kentucky, Missouri, Ohio, Oregon, and Pennsylvania levy an earnings or payroll tax. These taxes are separate from the state income tax. Earnings and payroll taxes are typically calculated as a percentage of wages, withheld by the employer (though paid by the employee) and paid by individuals who work in the taxing locality, even if the person lives in another city or state without the tax. Separately, localities in Kansas only tax interest and dividends (not wages).

WHAT INCOME IS TAXED?

Even the states that start with the federal tax base, however, often apply different rules for certain types of income. For example, unlike the federal government, states often tax municipal bond interest from securities issued outside that state. Many states allow a full or partial exemption for pension income. And most states, but not all, require taxpayers who itemize their federal tax deductions and claim deductions for state and local income taxes to add back this deduction on their state income tax return.

HOW DO INDIVIDUAL INCOME TAX RATES VARY ACROSS STATES?

Most state income taxes are fairly flat, even in those states that apply graduated rates. Nine states impose a single tax rate on all income, while Hawaii has the most with 12 tax brackets and rates. Top marginal rates for state income tax in 2020 ranged from 2.9 percent in North Dakota to 13.3 percent in California—including a 1 percent surcharge on incomes over $1 million (figure 2).

While most states in the 1980s followed the federal government’s lead in reducing the number of income tax brackets, some have increased the number of rates since then. California and New York have imposed new brackets (often called “millionaire’s taxes”) for high-income taxpayers. California approved a millionaire’s tax in 2004 that adds 1 percentage point to the rate applied to incomes over $1 million, and further increased the progressive bracket structure with another ballot measure in 2012. Similarly, New York’s top tax rate of 8.82 percent applies to income above about $1 million.

At the start of 2020, California, Hawaii, New Jersey, Minnesota, and Oregon had top rates above 9 percent and another six states and the District of Columbia had top income tax rates at or above 7 percent. 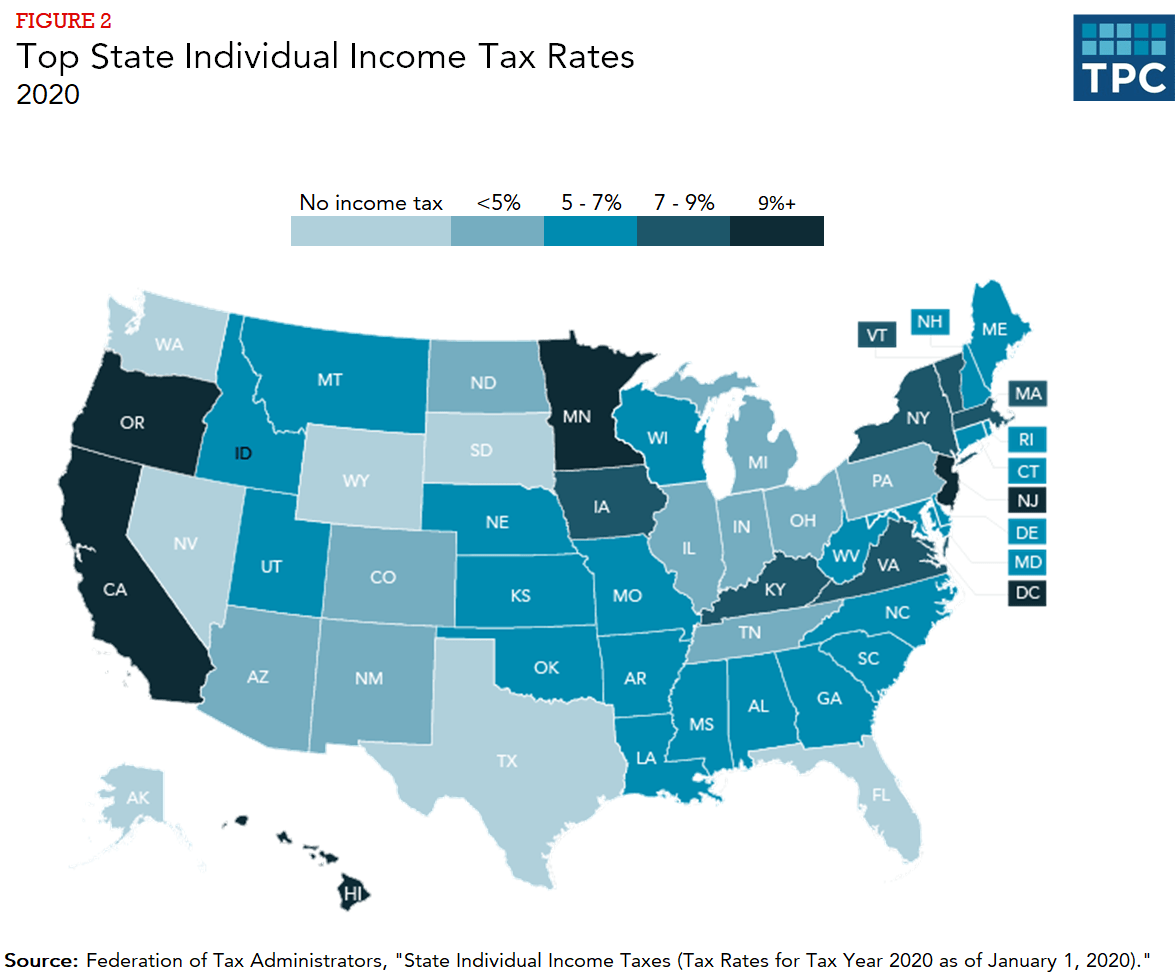 HOW DO STATES TAX CAPITAL GAINS AND LOSSES?

The remaining states that tax income generally follow the federal treatment of capital gains, except for various state-specific exclusions and deductions.

Most states tax capital gains at the same rate as ordinary income, while the federal government provides a preferential rate.

HOW DO STATES TAX INCOME EARNED IN OTHER JURISDICTIONS?