How do state and local sales taxes work?

How do state and local sales taxes work?

Forty-five states and the District of Columbia levy general sales taxes that apply (with some exemptions) to all goods and certain services. Thirty-seven states (including, Alaska, which has no state tax) also allow general sales taxes at the local level. Most states apply separate sales taxes to particular goods, including tobacco, alcohol, and motor fuels.

HOW MUCH REVENUE DO STATE AND LOCAL GOVERNMENTS RAISE FROM SALES TAXES?

HOW DO GENERAL SALES TAX RATES DIFFER ACROSS STATES? 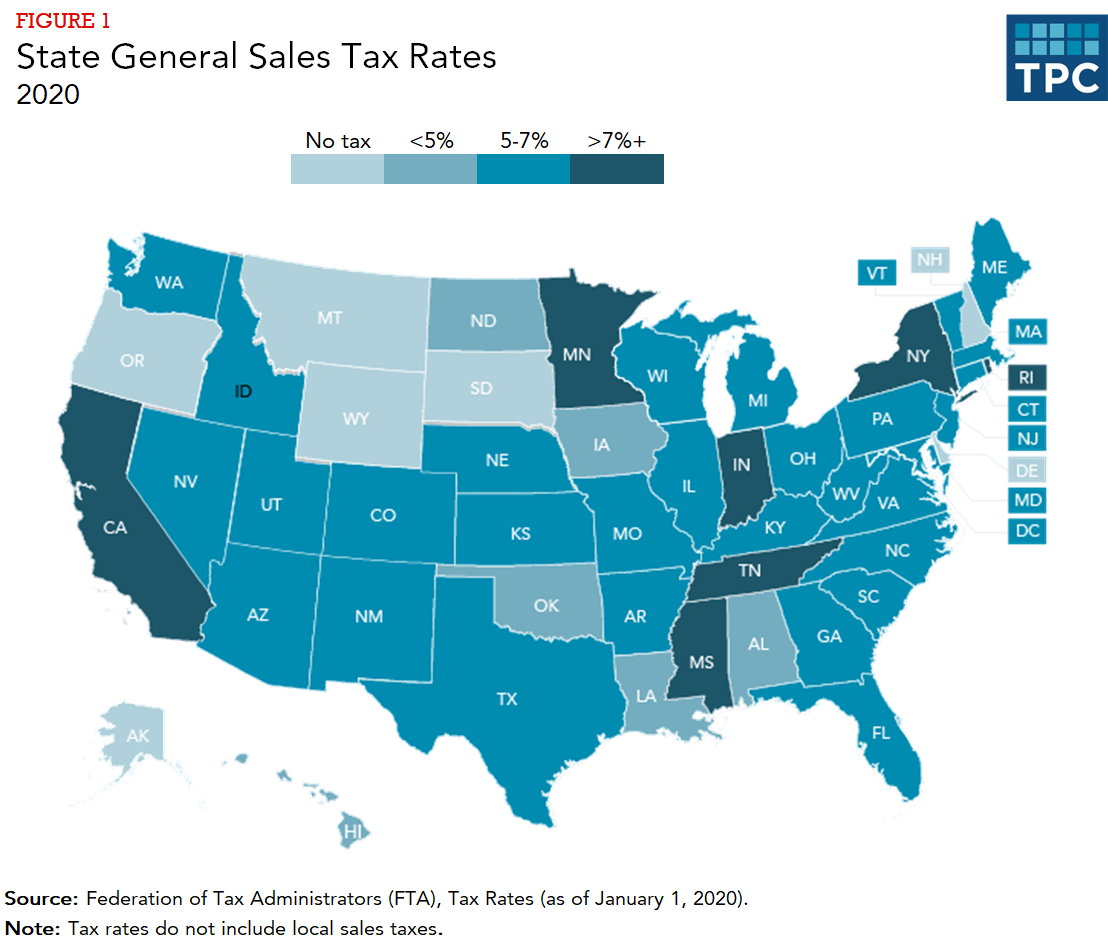 What purchases are subject to the general sales tax?

General sales taxes typically apply to most tangible goods. One notable exception is food purchased for use at home: only 13 states tax such purchases, and six of these states tax food at a lower rate than their general sales tax rate. Five of the 13 states that tax food for home consumption provide income tax credits to low-income residents to help offset the tax. In contrast, food bought for immediate consumption at restaurants is taxed in most states, and sometimes at a higher rate than the general sales tax rate.

Many states also exempt prescription and nonprescription drugs, textbooks, and clothing from general sales taxes. Some states have sales tax holidays, periods in which specific purchases—for example, clothes and school supplies right before the start of a new school year—are sold tax-free.

The taxation of services (e.g., dry cleaning, carpentry work, barbershops) is more complicated. All states tax some services, but exemptions are common. Very few states tax professional services, such as doctors and lawyers. Hawaii and New Mexico are exceptions to that rule, taxing nearly all services.

How do sales taxes apply to online purchases?

The evolving treatment of online and other remote sales (e.g., catalog sales) is complex. In 1992, the Supreme Court ruled (Quill Corp. v. North Dakota) that under the commerce clause of the US Constitution, a retailer with no physical presence in the online purchaser’s state of residence (technically called a "nexus” requirement) is not required to collect a state or local sales tax from the consumer.

However, the Supreme Court revisited this issue in 2018 in South Dakota v. Wayfair, Inc., overturned Quill, and gave states broad authority to collect the tax. The Supreme Court upheld a South Dakota law requiring any entity with sales of $100,000 or more or with at least 200 transactions in South Dakota to collect and remit the state’s sales tax. Other states quickly enacted similar laws. As of March 2020, Florida and Missouri were the only states with a general sales tax but not a law requiring remote sellers to collect tax.

Many states are now working on legislation that would require “marketplace facilitators,” organizations such as Amazon and eBay that allow third-party retailers to also sell items on their platform, to collect state sales taxes on those third-party sales as well. As of January 2020, 38 states and the District of Columbia had marketplace facilitator collection provisions.

Taxing online sales is not completely new, though. Many large retailers had already begun voluntarily collected the tax even before Quill. Most notably, Amazon has collected taxes in every state with a general sales tax since April 2017.

Further, states levy use taxes in addition to sales taxes. Consumers are subject to use taxes on goods purchased outside their state for use in their home state if they did not pay a sales tax and this includes online purchases. The use tax rate is the same as the sales tax rate, but few consumers know it exists and actually pay it. Many states with both a sales tax and an individual income tax (such as California, Kentucky, Virginia, and Utah) give taxpayers a chance to declare liability and pay use taxes on their income tax returns.

What taxes do states levy on tobacco, alcohol, and motor fuels?

All states levy “selective” sales taxes—with different rates than the general sales tax—on some goods and services. Three of the best known are taxes on tobacco, alcohol, and motor fuels. Those products are also subject to a federal tax. For tobacco and alcohol, the taxes are sometimes called sin taxes because one purpose of the tax is to discourage consumption. Marijuana and soda are also increasingly taxed by states and localities.

Cigarette taxes are typically levied per pack. In 2020, Missouri had the lowest rate (17 cents per pack) and the District of Columbia had the highest ($4.50). In six states (Alabama, Illinois, Missouri, New York, Tennessee, and Virginia), some local governments levy an additional cigarette tax. Local cigarette tax rates range from 1 cent per pack in Alabama and Tennessee to $4.18 per pack in Chicago (a Cook County tax of $3.00, plus a city tax of $1.18).

All states also levy taxes on other tobacco products, including cigars and loose tobacco. State and local governments also increasingly—21 states and the District of Columbia in 2020—tax e-cigarettes and vaping products.

State and local governments collected $19 billion in revenue from tobacco taxes in 2017, nearly all of it from cigarette taxes.

Alcohol taxes are generally paid at the wholesale level, so the cost is incorporated into the retail price. The excise taxes are levied per gallon (not as a percentage of the price), and beer, wine, and distilled spirits have different tax rates. In addition to the excise tax, many states also levy a general sales tax on the final purchase price of alcohol, and some states and cities have special sales tax rates for alcohol.

Motor fuel taxes are typically per gallon taxes. That is, consumers pay tax based on how much gas they purchase, not as a percentage of the final retail price of gasoline. However, 20 states and the District of Columbia tie at least a portion of their gasoline tax rate to the retail price. The lowest gasoline tax rate is in Alaska (8.95 cents per gallon) and the highest is in Pennsylvania (57.6 cents per gallon).

States earmark much of their motor fuel tax revenue for transportation spending, which has meant funding gaps for transportation as gasoline has recently stagnated. States are considering options like tying the gas tax rates to inflation or population, taxing based on price, and taxing miles traveled instead of gas (as more drivers use hybrid or electric cars). State and local governments collected a combined $47 billion in revenue from motor fuel taxes in 2017.

Some cities (e.g., Boston, San Francisco, and Washington, DC) also have special tax rates for specific goods and services (e.g., restaurant meals, hotel accommodations, rental cars, and parking) that are higher than their general sales tax rates. These higher tax rates are often designed to collect a significant share of their revenue from visitors, who use and benefit from city services and presumably have less political clout than local voters.

Auxier, Richard. 2014. “Reforming State Gas Taxes; How States Are (and Are Not) Addressing an Eroding Tax Base.” Washington, DC: Urban-Brookings Tax Policy Center.