Do you pay sales tax on your online holiday shopping?

Whether shopping on "Black Friday" or "Cyber Monday" or any other day of the year, Americans increasingly purchase things online. Census estimates that e-commerce is roughly 8 percent of all retail sales, up from 3 percent in 2006. Looking specifically at holiday shopping, trade groups estimate nearly half of all gifts are bought online.

This matters to state governments because many online retailers, unlike brick-and-mortar stores, often do not collect state sales taxes. It's not that states intentionally favor online retailers, but rather a side effect of states creating their sales taxes generations before the internet. A Supreme Court case (Quill Corp. v. North Dakota), brought by catalog retailers (yesterday's Amazon), held that states could not require companies to collect the sales tax on goods unless the company had a physical presence (called "nexus") in the buyer's state. So whenever you purchase something online from a retailer not located in your state, chances are the tax is not collected. This costs states billions in revenue, putting additional stress on state budgets. 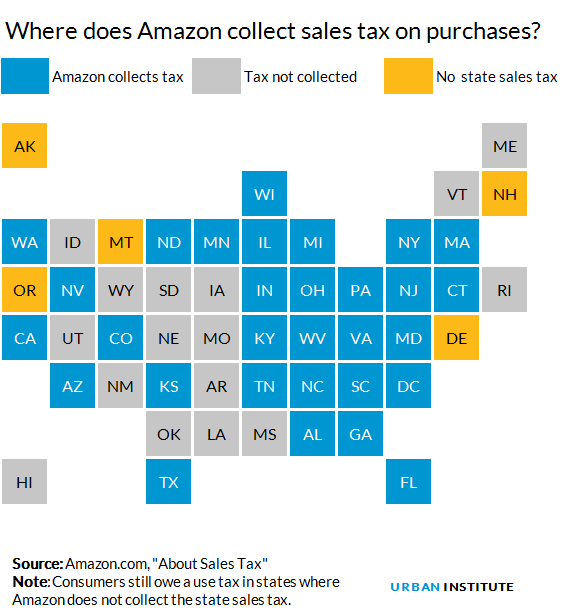 However, and this is important if unpleasant, you, the consumer, still owe tax on the purchase. If you live in a state with a sales tax (and there are only five without them) you also live in a state with a use tax—a tax on goods purchased outside their state of residence for consumption in their home state. A state's use tax is the same rate as its sales tax but the consumer (not the seller) is obligated to report the tax. Some states (like California and Utah) make this easy by including a line for this tax on income tax forms. However, few consumers actually pay the use tax.

Congress has drafted bills to address this hole in the state tax system, but each has failed to even get to a vote, and there's no reason to think the new administration and Congress will pass it. Now some states are enacting laws that challenge the nexus standard with hopes of changing the rules in court. And a majority of states have signed the Streamlined Sales Tax Agreement, which by standardizing sales taxes, prepare states if federal law changes and encourages large retailers to voluntarily collect the tax.

Still, despite federal inaction, some states are beginning to see more sales tax revenue from online purchases as the biggest online retailer moves into more locations. Amazon, in an attempt to cut down on shipping time, is building more distribution centers; and putting a building in a state establishes the physical nexus that triggers sales tax collection. Every time Amazon opens a warehouse or data center in a new state (like Colorado) they begin collecting the tax. These locations mean purchases are taxed but also allow the retailer to offer same-day or even two-hour shipping. In total, Amazon now collects state sales taxes in 29 states and the District of Columbia.

So odds are you’ll pay sales tax on some of your online shopping this year. And, sorry to be a Grinch, even when you don’t, you still owe your state the tax.

Amazon.com employees go back to work after a short break at an Amazon.com Fulfillment Center on "Cyber Monday" on the busiest online shopping day of the holiday season Monday, Dec. 2, 2013, in Phoenix. (AP Photo/Ross D. Franklin)