The Tax Cuts And Jobs Act And The Zombie AMT

One of the most significant provisions of the Tax Cuts and Jobs Act was its near-repeal of the Individual Alternative Minimum Tax, that complex parallel tax system that made life miserable for millions of mostly upper-middle income taxpayers. According to new Tax Policy Center estimates, the TCJA cut the number of taxpayers who pay the AMT from 5.2 million last year to just 200,000 this year. 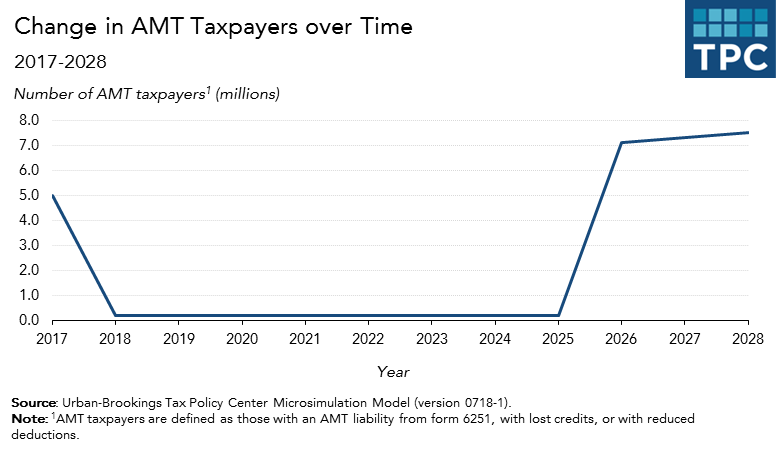 Until then, only the highest income households will be on the hook, according to TPC estimates. Unless you are making $1 million or more, there is almost no chance you’ll owe the AMT between now and 2025. TPC finds that almost no-one making less than $200,000 in expanded cash income will owe the tax (there are always a few exceptions). Only about 0.4 percent of those making between $200,000 and $500,000 will be hit—far fewer than the 27 percent who paid at least some AMT last year.

How does the AMT work? The top rate is 28 percent on AMT income that exceeds an exemption amount. But AMT income includes certain income that is excluded from the regular tax, such as interest on private-purpose municipal bonds. It also excludes personal exemptions, limits the ability of taxpayers to claim certain tax deductions, such as the state and local tax (SALT) deduction, as well as itemized deductions for job-related and other miscellaneous expenses.

The TCJA made several changes that have the effect of sharply scaling back the AMT. It significantly increased the AMT exemption amount to, for instance, $109,400 for joint filers from $84,500. It also raised the income level where the exemption is phased out. For joint filers in 2017, it began phasing out at $160,900 and completely disappeared at $498,900. In 2018, it doesn’t start phasing out until the taxpayer has $1 million in income and is fully ends at $1,437,600. These levels are all indexed for inflation.

The TCJA also made several indirect tax code revisions that make the AMT less relevant. It eliminated personal exemptions and those itemized deductions for job-related and miscellaneous expenses. It raised the standard deduction and capped the SALT deduction at $10,000. All these changes significantly reduced the number of taxpayers who are subject to the AMT.

In sum, with a higher AMT exemption amount, a much higher phase-out level for that exemption, an end to personal exemptions, and a sharp decline in the number of itemizers, the AMT just ain’t what it used to be.

The problem is that all the TCJA’s individual income tax changes—the AMT exemption adjustments, the SALT cap, the repeal of the personal exemption and the like—all revert back to pre-2018 law starting in 2026. As a result, the number of AMT taxpayers would return to the levels they would have reached had the law never passed in the first place. The AMT will become the undead. Just like in one of those bad zombie movies.