How do state estate and inheritance taxes work?

How do state estate and inheritance taxes work?

Twelve states and the District of Columbia have an estate tax and six have an inheritance tax (Maryland has both). Before 2001, when a federal credit offset the cost of state taxes, all states taxed the transfer of wealth at death.

An estate tax is paid by the estate itself on the transfer of property at the time of a person’s death. States must allocate assets across jurisdictions if the deceased person lived or owned property in multiple jurisdictions.

Before 2001, all 50 states and the District of Columbia had an estate tax because the federal estate tax provided a state tax credit worth 16 percent of the taxable value of the estate. Thus, states could raise revenue without increasing the net tax burden on their residents by linking directly to the federal credit, and all states did this by setting their estate tax rate equal to the maximum credit. However, federal tax changes in 2001 replaced the credit with a less valuable deduction, and many states eliminated their tax.

Each state exempts a gross amount from its tax (figure 1). These exemptions range from $1 million in Massachusetts and Oregon to $5.85 million in New York. Some states previously tied their exemption to the federal amount, but after the Tax Cuts and Jobs Act raised the federal exemption from $5.49 million to $11.2 million beginning in 2018, the District of Columbia, Hawaii, Maryland, and Maine all decoupled and established their own exemption amounts. Connecticut was planning to match the federal amount in 2020, but recent legislation pushed the conformity date to 2023. 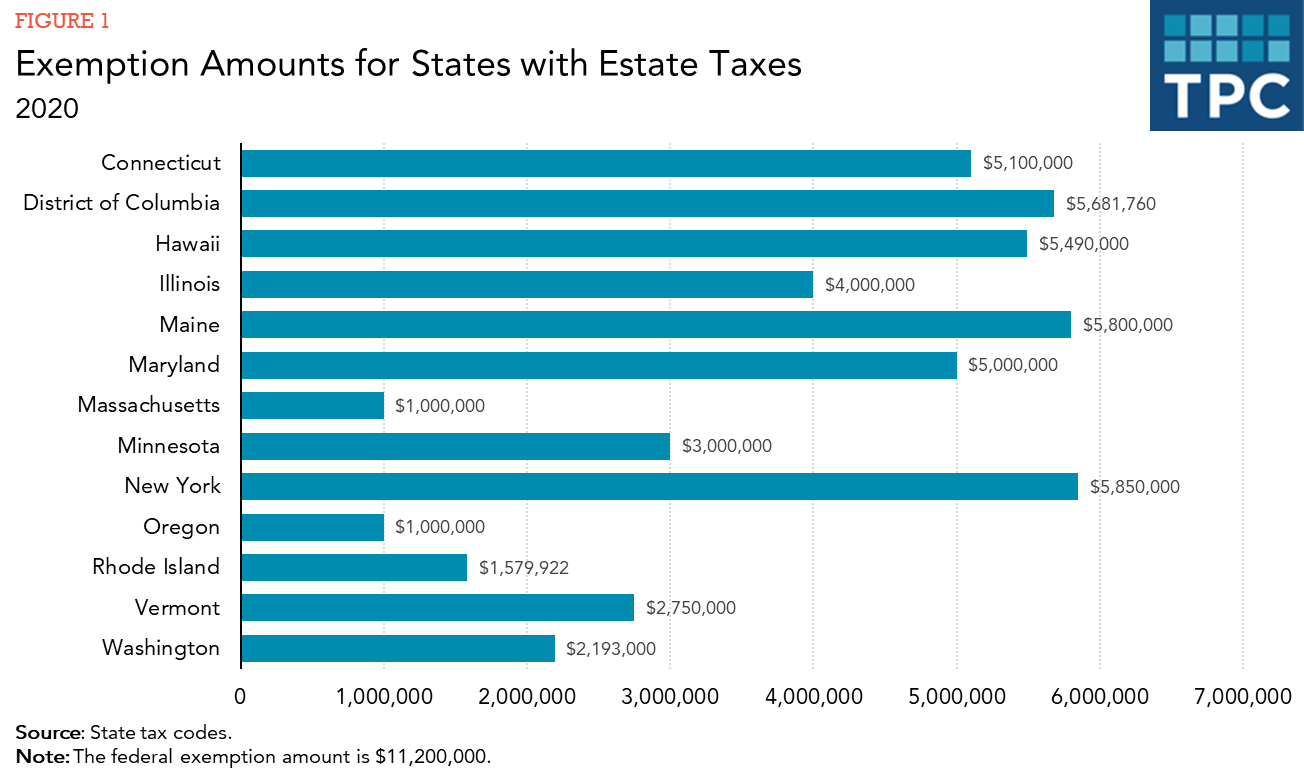 An inheritance tax is similar to an estate tax but is paid by the heirs rather than the estate. The tax is levied on a resident’s estate or a nonresident’s in-state property at the time of death. The tax depends on the heir’s relationship to the decedent. Surviving spouses are exempt in all states with inheritance taxes; some states also exempt direct descendants. Iowa, Kentucky, Maryland, Nebraska, New Jersey, and Pennsylvania have inheritance taxes. Indiana recently repealed its inheritance tax.

From 1924 to 2005, the federal government shared estate tax revenue with the states by allowing a credit for state estate and inheritance taxes. From 1924 to 1954, the credit was equivalent to 25 percent of the federal estate tax. After 1954, estates could claim a credit for state estate and inheritance taxes according to a progressive schedule with a top rate of 16 percent of the taxable value of the estate. As a consequence, rather than establishing unique taxes, states enacted estate taxes that equaled the maximum credit. In 2000, the last year the full credit was available, the state tax credits totaled $6.4 billion.

The Economic Growth and Tax Relief Reconciliation Act of 2001 (EGTRRA) phased out the credit, replacing it with a less generous deduction. Many states directly linked the estate tax to the amount of the credit, and estate taxes would go to zero if they did not “decouple” from the federal law. In fact, 30 states let their tax go away by doing nothing. Fifteen states and DC did decouple, establishing separate estate taxes; five states explicitly repealed their taxes.

All provisions of EGTRRA were scheduled to expire in 2010 but were extended to 2012. In 2012, Congress did not address EGTRRA until the very end of the year, creating a fiscal cliff for most federal taxes and the possibility that the federal credit for state death taxes would return. In the end, Congress permanently replaced the state credit with a deduction for estate taxes paid to the states.