Scrambling for a politically acceptable way to raise revenue to pay for a scaled-down social spending and climate bill, Senate Democrats are considering a plan to expand the Net Investment Income Tax (NIIT). Predictably, critics allege the plan would hurt small, family business.

But a new Tax Policy Center analysis finds that in 2023 the burden of the House version of this tax hike overwhelmingly would fall on the highest income 1 percent of households (those making $885,000 or more). More than half the new tax would be paid by the top 0.1 percent, those making $4 million or more. Households making $1 million or more would pay about 85 percent of the expanded tax.

Who pays, and who doesn’t

The 3.8 percent NIIT was included in the 2010 Affordable Care Act (ACA). It applies only to unmarried filers making $200,000 or more or joint filers making $250,000 or more. The tax is imposed on investment income such as interest, dividends, capital gains, rents and royalties, and, crucially, business income that the tax code treats as passive, as opposed to active.

While many owners of pass-through businesses must pay the NIIT under current law, others do not. For example, active owners of S Corporations generally are exempt from the tax. There were more than 4.7 million of these businesses in 2017.

Similarly, real estate professionals do not have to pay the NIIT on rental income.

The House bill would make two big changes. First, for high-income households, it would expand the tax to include all business income, whether or not the taxpayer materially participates in the business, as long as that income is not already subject to payroll taxes. In effect, S Corporation shareholders, limited partners, and other owners of pass-through business who now are exempt would get hit by the NIIT.

Second, solely for that active income, the House bill would raise the income threshold to $400,000 ($500,000 for couples filing jointly). That would require two separate income thresholds, a feature that exclude the vast majority of business owners but also would make filing more complex (though those affected are likely to have accountants doing the work). 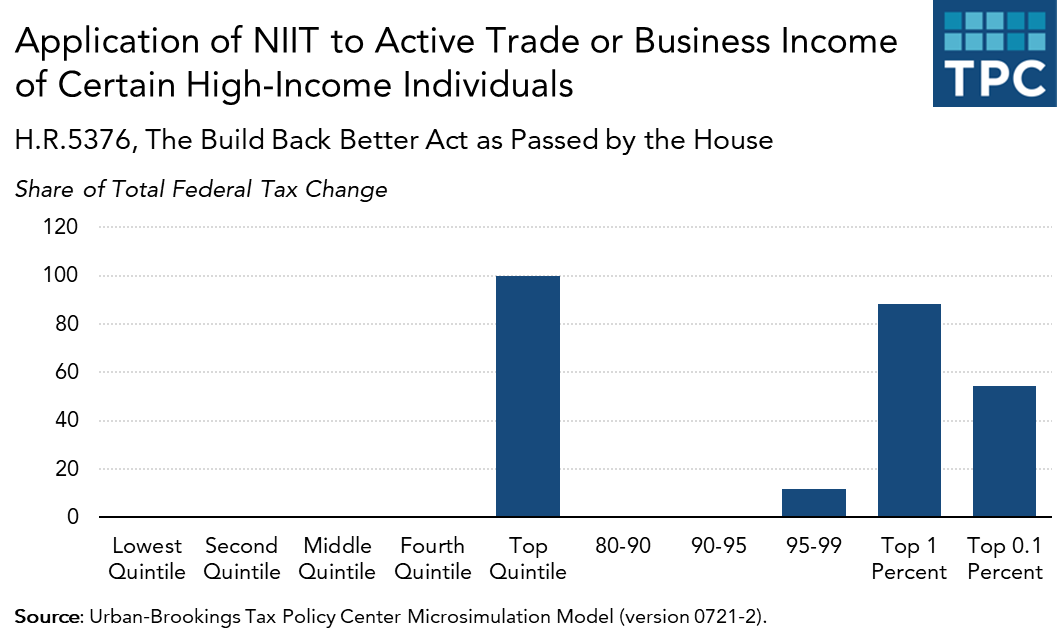 The trade group S Corp.org charged, “Expanding the NIIT would raise taxes on small and family-owned businesses.” Family-owned? Often. Small? Not necessarily. In 2005, 0.3 percent of S Corporations with at least $50 million in annual income accounted for one-quarter of all income for these firms, according to my TPC colleague Donald Marron.

Of course, we could argue endlessly about what a small business is. But we probably could agree that someone with annual modified adjusted gross income of $1 million or more is not a struggling entrepreneur.

We also know that about 85 percent of partnership and S Corporation income was earned by households making $200,000 or more, and half was made by households with $1 million or more in annual income. They may need to check with their accountants.

It remains to be seen whether Congress will finally agree to any expansion of the NIIT. But if it does, the vast majority of family-owned small business will be entirely unaffected.