What does the IRS do and how can it be improved?

What does the IRS do and how can it be improved?

The IRS administers the federal tax laws that the Congress enacts.

The Internal Revenue Service (IRS) administers the federal tax laws that Congress enacts. IRS performs three main functions—tax return processing, enforcement, and taxpayer service. In addition, the IRS conducts criminal investigations and oversees tax-exempt organizations and qualified retirement plans. The IRS budget and workforce have been shrinking, even as the tax law has become more complex and the agency has taken on new tasks.

Slightly over 40 percent of the IRS’s $11.5 billion budget in 2017 went to enforcement (figure 1). About 84 percent of the enforcement budget was for examinations of taxpayer returns (audits) and collections. IRS spent the remainder on criminal investigations and regulatory activities, including monitoring tax-exempt organizations and qualified retirement plans.

About 36 percent of the budget funded operations support, including information technology, services, facilities, and organizational support. Another 21 percent supports taxpayer services, including prefiling taxpayer assistance and education and filing and account services. Finally, another 3 percent went to business systems modernization to upgrade information and technology services. These percentages have remained roughly stable in recent years. 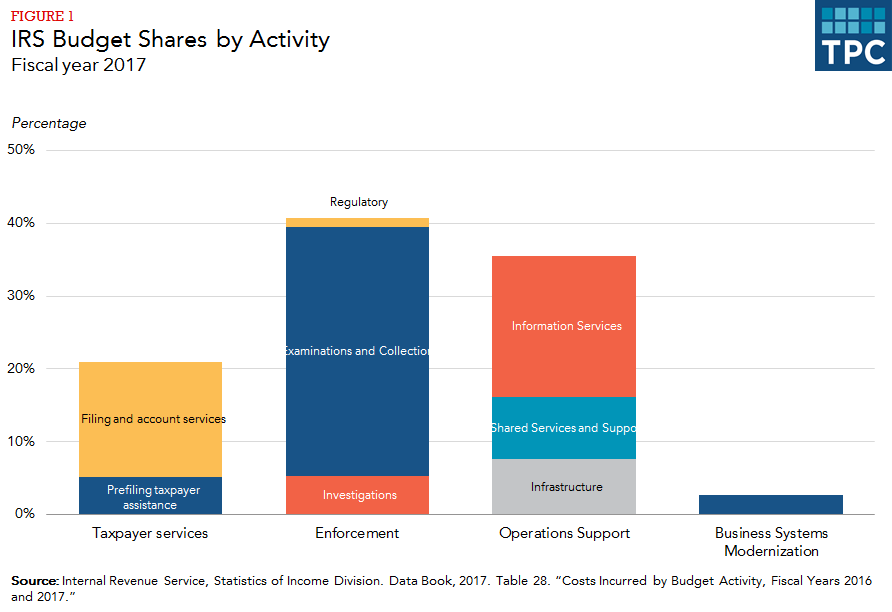 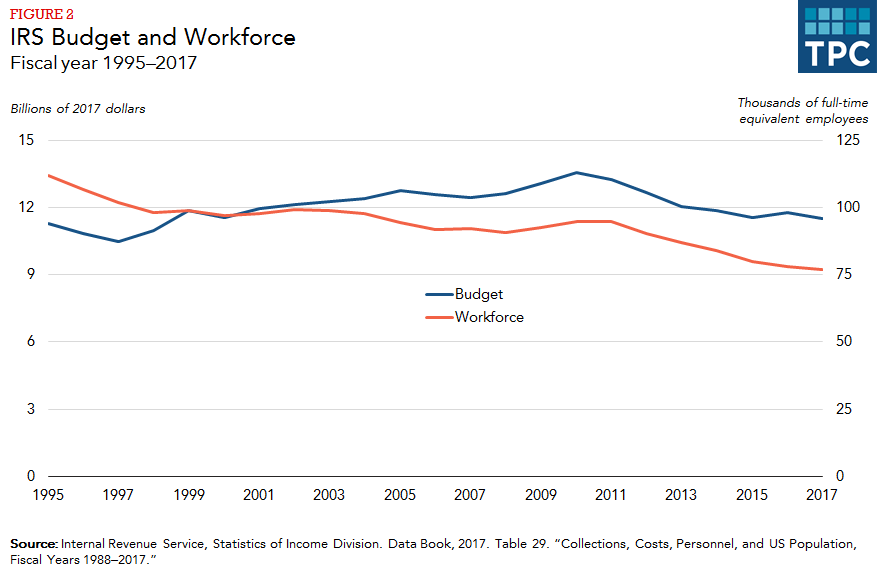 While IRS resources have shrunk, the agency’s workload has increased. With the taxpayer population increasing, the IRS must process more returns, administer more deposits and refunds, and expend more resources to keep taxpayers compliant. Changes in the economy and society have created other challenges for tax enforcement and compliance. These include the globalization of corporate activity, an increase in the share of income taxed through partnerships and other pass-through entities, and changes in family structure. The latter changes have made it harder for IRS to determine whether taxpayers are entitled to tax benefits based on complex criteria, including household living arrangements, family relationships, and support tests.

A major source of increased workload has been the IRS’s expanded role in adminstering social programs. The IRS today manages a wide range of benefits for low- and middle-income families and families with children. These include the earned income credit, the child credit, the child and dependent care credit, tax subsidies for higher education, and premium subsidies under the Affordable Care Act. When Congress creates new programs for the IRS to administer, it often does not provide additional funding to administer them.

The 2017 Tax Cuts and Jobs Act presents the IRS with new challenges. IRS will need to write new regulations to administer provisions that are ambiguous and sometimes contradictory. Some provisions that appear to be especially difficult are the new 20 percent deduction for income from pass-through businesses and the complex new international tax provisions. Congress is considering a supplemental appropriation to help IRS administer the new tax law, but that additional funding will not reverse the long-term decline in the IRS budget.

WHAT CAN BE DONE?

The IRS is a complex and unwieldy bureaucracy that cannot easily transform into a modern high-tech organization. Some measures, however, could improve tax administration. Congress could enact legislation to simplify the tax law, as the National Taxpayer Advocate and some reform commissions have proposed. Congress could increase funding to reverse recent budget cuts and prevent a steep drop in the agency’s enforcement presence. More funds for enforcement could more than pay for themselves in increased revenue collections. Congress could also give the agency more flexibility in personnel management and additional resources to help modernize their information technology, including relaxing existing pay ceilings for top technology personnel.

Toder, Eric. 2017. “IRS: What it Does and How to Reform It.” Washington, DC: Urban-Brookings Tax Policy Center.