Most analysts expected the Tax Cuts and Jobs Act to boost economic output modestly in both the short and the longer run. So far, the evidence supports the prediction for the short run. It is too soon to tell about the longer run but as yet there is little evidence of a strong effect on investment that could lead to higher longer-run growth.

The Tax Cuts and Jobs Act (TCJA) reduced tax rates on both business and individual income, and enhanced incentives for investment by firms. Those features most likely have raised output in the short run and will continue to do so in the long run, but most analysts estimate the modest effects that offset only a portion of revenue loss from the bill (table 1). 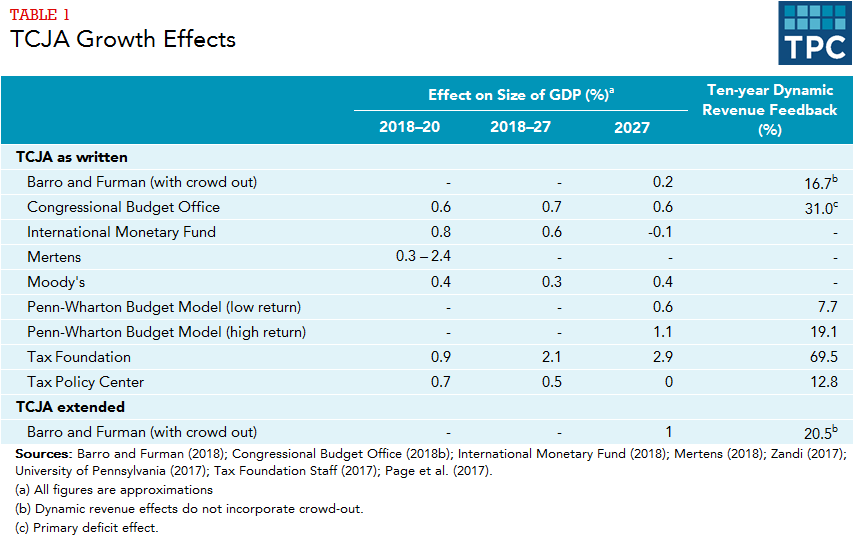 So far the TCJA has likely influenced the economy primarily by raising demand for goods and services. Cuts to individual income taxes mean that most households have more after-tax income, which they are likely to spend. In addition, provisions such as allowing the expensing of some capital investment may have increased investment spending by firms. As businesses see more of their goods being purchased, they respond by ramping up production, boosting economic output. Growth in 2018 rose to 2.9 percent, from 2.4 percent in 2017, likely due largely to the effects of TCJA on demand. However, growth slowed back down to 2.3 percent in 2019.

Those short-run effects have likely been limited, however, for two main reasons. First, much of the tax cuts flow to higher-income households or to corporations, whose stock tends to be held by the wealthy. Higher-income households tend to spend less of their increases in after-tax income than lower-income households. Second, the tax cut was enacted at a time when unemployment was low and output was near its potential level. Therefore, the increase in demand has been offset by tight monetary policy, as the Federal Reserve held interest rates higher than they otherwise would have been to avoid rising inflation.

It’s too soon to judge what TCJA’s long-run impact on investment will be, but so far there is little evidence of a strong effect. Investment rose in 2018, but research by the IMF suggests that increase stemmed mostly from the short-run boost to demand. Supporting that notion, a Congressional Research Service analysis found that the types of investment that rose in 2018 were not those whose costs were reduced most by TCJA (as one would expect if the increases were driven by long-run cost factors rather than short-run demand).